The Family YMCA: Saving A Village 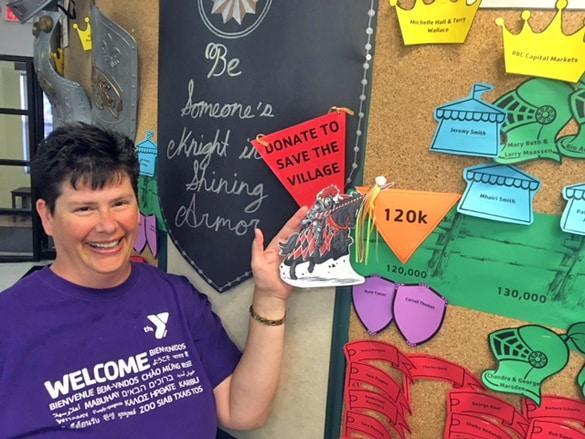 The thought that it takes a village to raise a child, CEO of The Family YMCA Linda Daly said, is the reason the Y hosts an annual fundraising campaign. “We believe that if a family wants to participate in healthy programs, or if a child wants to play basketball, that cost should not be an obstacle. At the Y, we believe that everyone should belong.”

Daly said this year’s campaign theme, Be Someone’s Knight In Shining Armor, has a goal to raise $165,000 for financial assistance and teen center programs. A wall in the Y’s lobby marks progress in the campaign with an image of a charging Knight racing to save a village from a hovering dragon.

“We’re asking everyone to help us ‘save the village,’ with a donation that moves the knight closer to slaying the dragon,” Daly said. “Every gift matters, and every bit helps. While we are so grateful to our business donors, we really need individual gifts to help us meet the goal … It really does takes a village to raise a child,” she said.

Volunteer board and campaign member Debbie Huling said census data shows that close to 800 people in Los Alamos live in poverty. “I think it’s wonderful that the Y provides programs and membership to 300 who need the help.” Huling said the Y officially kicked off its fundraising drive on April 12 and that by June the Y has raised $120,000 or 72 percent of the goal. “We have to keep up momentum,” she said, “it’s important that everyone be included.”

Last year the Y awarded $126,000 in assistance, and provided $46,000 in support to the teen centers, said Daly.  The Y operates teen centers in Española and Los Alamos that are not fully supported by contracts. She said a total of 300 people, 200 of which are children, are on financial assistance at the Y.

“We don’t charge people who can pay enough to cover those who can’t afford to pay,  that is why we fundraise.” She said one in four youth in the camp and afterschool programs are on assistance, which totals 112 over both programs, and requires 11 staff to supervise, a cost that must be covered.  Daly also said 100 adults are on assistance at the Y, which is about one in 28 in a Y class.

Huling said community members are asked to consider a donation. “I invite everyone to read these true stories, and join me in helping the Y continue their mission to build individual, family and community strength.”

Huling said people who are willing may mail a check to the Y, with the memo –Y Annual Campaign, to the Y at 1450 Iris Street, Los Alamos, NM 87544, or donate online at www.laymca.org.

Jessie Gac’s story about the YMCA:

“I returned to the U.S. about a year ago, after serving at an international school in Africa for the previous decade,” Gac, a member of the Family YMCA, said. “I set aside a year to intentionally reconnect with family, to learn to navigate the U.S., and to figure out where I wanted to go from here.  During my time overseas, I had survived a major accident that gave me a brain injury. My new brain chemistry prevents me from being able to take anti-depressants, but high heart rate athletic activities can be a real boost for me, helping my brain immensely. Working out at the Y has allowed me to begin to re-adapt to the U.S. and to engage in teaching, volunteer work, and church involvement again. I’m very grateful for the excellent community work of the YMCA, and I’m thankful for the positive ways my scholarship membership has affected me. I am training for a triathlon, I have secured a full time teaching job for next fall, and I am feeling more and more settled in my new community. Thank you so much!”

“The Teen Center helped save my life,” Mascareñas, a member of the Española YMCA Teen Center, said. “I did not care, I was hating school; I had almost no GPA when I first came here. I tried to push Ben and Renee away and they would not leave me. I would get so mad at Ben and I probably called him every curse word in the book, in my head of course. He would keep being there. They were so consistent and they showed me that I was important. I started to let them in and help me and it made all the difference in the world. I started to change. I started to live life again. My grades got better. I stopped getting in trouble at school. I can now say two years later I am going to graduate with my class and I could have never done it without the Y. This is a great place and it will help you be a better person. I have a special memory of Janessa when we sat down to draw together one day and she drew a picture of me and put a big heart around it and she wrote that we were BFFs. That picture is on my wall and it always reminds me of this awesome place.”