The End Of World War II in Los Alamos 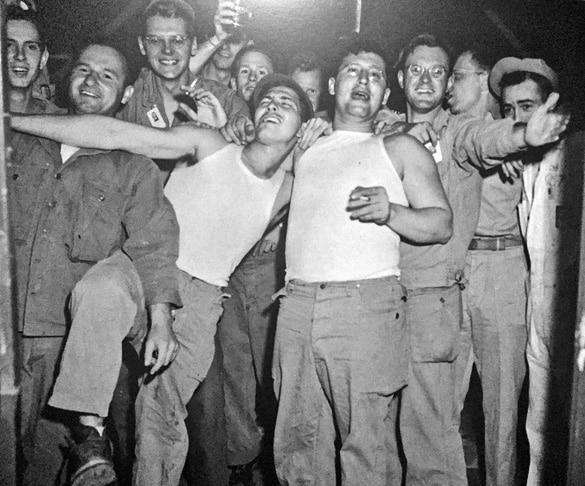 GIs in Los Alamos celebrate the news that the war is over. Courtesy photo

This week marks the 73rd anniversaries of the dropping of the atomic bombs on Hiroshima and Nagasaki as well as the end of World War II, the bloodiest conflict in human history.

Reaction to the end of the war in Los Alamos, according to those who lived it, was mixed.

Eleanor Jette described events in her classic book, Inside Box 1663: “About two o’clock, bedlam broke loose; word of the surrender request had reached the [army] barracks. GIs in trucks, jeeps, and on foot assembled in front of Theater Two, and a good part of the civilian population joined them. An impromptu parade started. Willy Higinbotham, playing his accordion, balanced precariously on the radiator of the leading jeep, and lids snatched from garbage cans clashed merrily.

“The four of us who lived on the top floor of T-185 [apartment] roused our children to see the fun. We hung over the porch rail, and the parade stopped to serenade us…The next morning, the surrender request was official, but the Tech Area was open for business as usual.”

Jette, whose brother Preston was in the Pacific theater and scheduled to take part in Operation Olympic, the invasion of Japan, was grateful that he was safe.

In 109 East Palace: Robert Oppenheimer and the Secret City of Los Alamos, Jennet Conant writes, “Los Alamos residents reacted with a mixture of relief and sorrow, delight and profound distress. Their emotions were in such a tumultuous state that it was hard to know how to feel or act. Only the GIs seemed to celebrate with total abandon, piling en masse onto army trucks and jeeps and riding around cheering wildly. George Kistiakowsky [a Harvard chemist and the project’s high explosives expert] drunkenly saluted the long-awaited end of the war by firing off twenty-one boxes of Composition B in an empty field. Other celebrations followed, but there were fewer of them, and they were more subdued.”

Both Conant and Richard Rhodes, in his Pulitzer Prize-winning book, The Making of the Atomic Bomb, detail the reaction of scientist Otto Frish to the bombing of Hiroshima: “Then one day, some three weeks after [Trinity], there was a sudden noise in the laboratory, of running footsteps and yelling voices. Somebody opened my door and shouted, ‘Hiroshima has been destroyed!’; about a hundred thousand people were thought to have been killed. I still remember the unease, indeed nausea, when I saw how many of my friends were rushing to the telephone to book tables at the La Fonda Hotel in Santa Fe, in order to celebrate. Of course they were exalted by the success of their work, but it seemed rather ghoulish to celebrate the sudden death of a hundred thousand people, even if they were ‘enemies.’”

Luis Alvarez, a Los Alamos scientist who flew in an observation plane on the Hiroshima mission and won the 1968 Nobel Prize in physics, did not understand the gloom of some of his colleagues like Frisch. “Many of my friends felt responsible for killing Japanese civilians, and it upset them terribly. I could muster very little sympathy for their point of view; few of them had any direct experience with war or the people who had to fight it.”14

Conant writes that while Alvarez shared his fellow scientists’ regret over the loss of life on both sides, he did not share any moral queasiness or second thoughts about dropping the two bombs that “brought the conflict to a swift conclusion.”

For more perspectives on the atomic bombings and the end of World War II from the people who experienced it, visit the Voices of the Manhattan Project website, www.manhattanprojectvoices.org. In the drop down menus on the right side of the page, chose “Reflections on the Bombings of Hiroshima and Nagasaki” under Subject and “Los Alamos” under Locations.