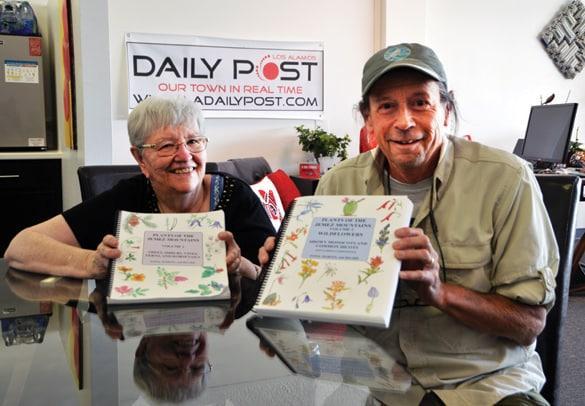 Teralene Foxx and Craig Martin show off both volumes of ‘Plants of the Jemez Mountains’. Volume 2 has just been published. Photo by Carol A. Clark/ladailypost.com
By BONNIE J. GORDON
Los Alamos Daily Post
bjgordon@ladailypost.com

Those tireless Living Treasures and environmental heroes Teralene Foxx and Craig Martin are at it again—encouraging people to get outside and learn about the world around them, while also adding to the store of knowledge about our area. The two just published “Plants of the Jemez Mountains, Volume 2, Flowering Plants”. It follows “Plants of the Jemez Mountains, Volume 1, Trees, Shrubs, Vines, Ferns and Horsetails,” published in 2014. A third volume will be published in 2019 … or so, Martin said.

“It’s been a team effort,” Foxx said. “I feel privileged to work with June and Craig.”

The third volume will be on plants in the sunflower family. There are so many they get their own book. With more than 1,400 plants in the Jemez Mountains, it’s no wonder they decided to skip the grasses.

The series’ third contributor and guiding spirit is yet another environmental hero (and Living Treasure) the late Dorothy Hoard.

It all began in 1984 when Hoard and Foxx published their guide, “Flowering Plants of the Southwestern Woodlands.” That book was revised in 1995 and Hoard and Foxx were preparing to revise it again when Hoard died in 2014. Hoard did the drawings for the book.

“I knew Craig was interested in plants and I asked him if he’d like to work with me on the book,” Foxx said. “He wanted to do the whole of the Jemez Mountains!”

And so they did.

“Dorothy once told Craig he didn’t know anything about plants,” Foxx said. “Well he sure does now!”

“One reason I wanted to do everything, is because I’d find a weird plant that wasn’t in Terry and Dorothy’s book and want to know what it was,” Martin said.

“The books are a dedication to Dorothy,” Foxx said. “For both of us, this is a way to honor her.”

“When we make decisions about something for the book, I think, what would Dorothy think about that?” Martin said.

The second volume is done in the same format as the first. It’s an 8.5 by 11 inch volume with descriptions, drawings, identification details and photographs of each plant. Foxx, the biologist and Martin the naturalist draw on their own skills as well as on research. At Martin’s suggestion, they include “fun facts” about the plants. Martin and Foxx laid out the book so that information is in the same order on each page, so a person can compare two species easily.

In addition to Hoard’s drawings of plants in their habitat, the authors wanted close-up illustrations of the plants. Foxx stepped up and discovered a new skill. She had no idea she could do it until she did.

“If there’s something missing, Terry can draw it,” said Martin enthusiastically.

Martin photographed each and every plant, close to 900.

“For every picture, I got to be outside,” Martin said. “That was the payoff.”

“I started taking pictures when I was waiting for the kids during hikes,” Martin said. “Going slow is how you see things.”

Because these are blooming plants, for the second volume, Martin made careful lists of when to photograph them at the peak of flowering.

Volume 2 is big! Even a bodybuilder wouldn’t want to carry it on a hike. No worries, Martin explained. You take a picture of the plant and identify it when you get home.

“The book is not only beautiful, it’s useful,” Foxx said. “Experts and non-experts can use it and enjoy it. The goal I had with the first book is to get people outside. I still have a passion to get people outside and I hope the books contribute to that. When you get out and look at the natural world, you value it more.”

“Plants of the Jemez Mountains, Volume 2, Flowering Plants” is available at the Los Alamos Nature Center.