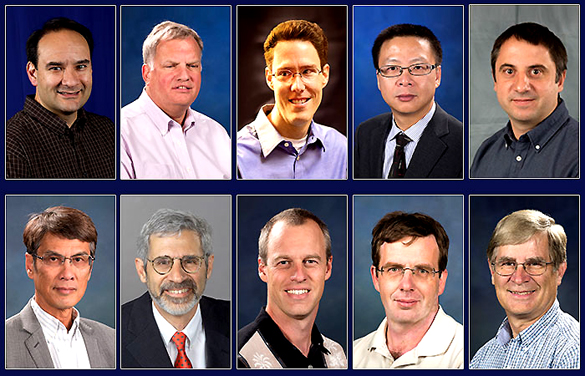 Named this week by the national organization:

“We’re extremely pleased that the technical accomplishments of our talented staff have been recognized in their designation as APS Fellows,” said Los Alamos National Laboratory Director Charlie McMillan. “It is particularly noteworthy that these selections represent a breadth of innovation in applied physics that Los Alamos uses to help accomplish our mission of protecting the nation.”

“For the APS divisions to have marked 10 of our staff for this honor speaks powerfully to the quality of our science, and to the wide range of capabilities we offer the nation and beyond.  We are delighted to be able to celebrate these excellent and innovative researchers in such complex and fundamentally important fields,” said Alan Bishop, principal associate director for Science, Technology and Engineering at Los Alamos.

Eric Bauer: honored for outstanding and original contributions to the discovery and understanding of correlated electron systems, specifically for the study of complex electronic states hosted by correlated actinide and rare-earth materials. Nominated by: Division of Materials Physics

Dinh Nguyen: honored for an outstanding record of innovation and contribution to the initial development of high-brightness photo-injectors, early experimental validation of self-amplified spontaneous-emission theory, and high average current injectors. Nominated by: Division of Physics of Beams

Alan Perelson: honored for seminal contributions to the development of dynamical models of HIV infection, for elucidating therapeutic responses of HCV, and for helping found the fields of viral dynamics and theoretical immunology. Nominated by: Division of Biological Physics

Alexander Saunders: honored for contributions in developing proton radiography and the LANL ultra cold neutron source, enabling new applications of nuclear science and an improved understanding of the decay of the free neutron. Nominated by: Division of Nuclear Physics

The American Physical Society is a non-profit membership organization working to advance and diffuse the knowledge of physics through its outstanding research journals, scientific meetings, and education, outreach, advocacy and international activities. APS represents more 50,000 members, including physicists in academia, national laboratories and industry in the United States and throughout the world.