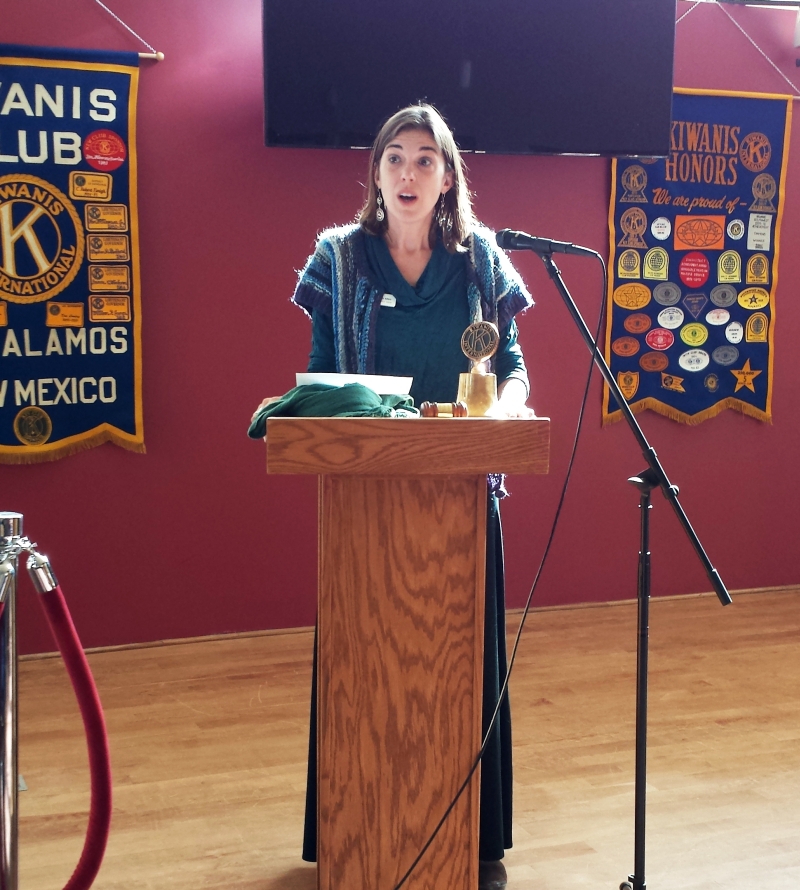 Sylvan Argo brings an international background to her relatively new role as the director of the Los Alamos Teen Center. She briefed the Kiwanis Club of Los Alamos on her own background during a talk Jan. 7, then turned to a discussion of the activities, plans, and hopes of the center, now located in the basement of Trinity-on-the-Hill Episcopal Church.

Argo holds a bachelor’s degree in psychology (with honors) from Whitman College in Washington state. She also earned distinction on coursework for a master’s degree in human ecology from the University of Strathclyde in Glasgow, Scotland.

She provided Kiwanis with a summary of her background that said she grew up in Botswana, Swaziland, Kenya, Mozambique, and Egypt and moved to Los Alamos in 1998, graduating from Los Alamos High School in 2000. Her personal credo, the summary said, “is to embrace cultural differences and promote positive communication between individuals of diverse backgrounds, beliefs, and ages.”

Argo has more than 10 years of experience, the summary said, in “researching, creating, piloting, implementing, and evaluating youth and teen programs in non-profit and school settings”:

She became director of the Los Alamos Teen Center in August 2013. She said she “loves having the opportunity to work with so many creative and inspiring teens in our community.”

The Teen Center, she said, is “a place for teens to come and connect to (other) teens and to caring adults.” After the recent suicide of one Los Alamos High School student, she said, the center became a place for both teens and their parents to have coffee and food and talk to a counselor and to each other.

During the recent holidays, young people came back from college to visit the Teen Center.

The center, she said, is “a place to explore what we can all become.” It has a video game club, a pool table, and art tables. It offers programs in music production, computers, and art. It has encouraged young people to create everything from recycled-plastic lunch bags to murals on the walls. It helps teens get ready to apply for jobs. It gets teens out hiking on Los Alamos-area trails. And it provides diversity programs.

The center’s budget, however, presents challenges. It was recently reduced by the County Council from $194,000 to $180,000. Argo and others are trying to have the funding reinstated.

She told Kiwanis, “We’d like you to adopt programs,” and she suggested a donation of “say, $1,000 for music.” She said the teens are trying to help. They have suggested an auction of their art. The center is open to all suggestions, she said. “Come talk to me.”

During the question-and-answer session after her talk, Kiwanis member Pat Soran asked how many young people actually use the center. She said there are usually 20 to 30 young people there during the lunch hour, and sometimes the number climbs to 40. The record is about 80, and the low can be two to six. The numbers depend on the day and what is scheduled. Some teens come every day because they have nowhere else to go. Some come for specific programs.

Considering what the center is doing and the number of people it serves, she said, it is “at capacity” in its current location. There are plans to move it to the Community Building next to Ashley Pond in July or August 2015.

Asked if she considers the program successful, she said, “I do.” A restored budget and the new, larger space could make today’s dreams become tomorrow’s reality.