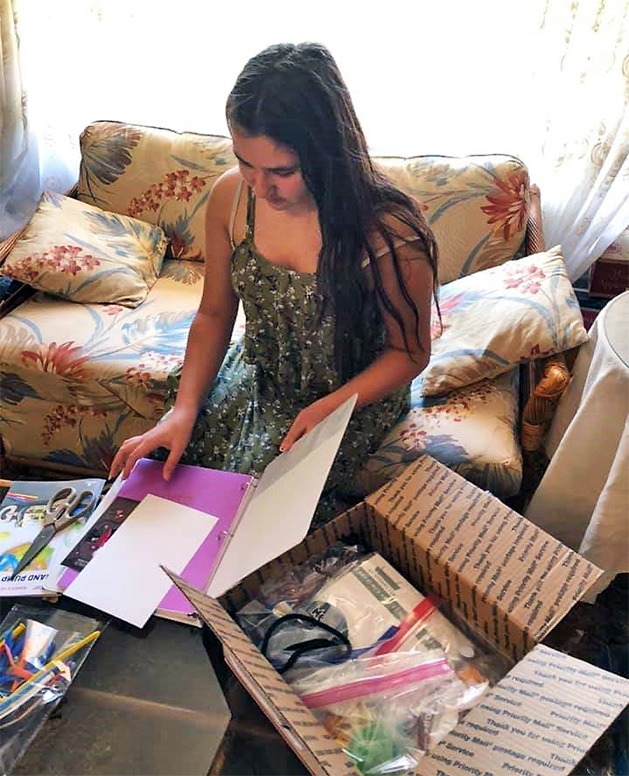 A student unpacking her Tech-Trek-in-a-Box for this year’s STEM Camp. Courtesy/AAUW

Sixty 7th grade girls from across the state were selected in April to attend the American Association of University Women’s (AAUW) STEM camp at New Mexico Tech.

This was to be the seventh year that AAUW in New Mexico ran Tech Trek NM to nurture girls’ interests in science, technology, engineering, and math (STEM). So when COVID-19 made holding camp impossible, AAUW decided to try a new approach: take (literally mail) the camp to the girls. Thus was born Tech-Trek-in-a-Box.

Tech Trek is usually a week-long residential camp where girls participate in STEM classes, workshops, and field trips. Although it was not feasible to run classes online, instructions and supplies for workshop activities could be boxed and mailed.

With permission from parents and guardians, campers received a box that included a backpack, a Kindle tablet loaded with apps, a graphing calculator, workshop supplies and instructions, and a journal.

Since at camp the girls meet women STEM professionals, the Kindle also included videos from the PBS series “Ask a Scientist,” highlighting New Mexico women in STEM careers, and an e-book, Women in Science: 50 Fearless Pioneers who Changed the World.

The boxes were mailed in early June, arriving just before Tech Trek was scheduled to start. Girls were encouraged to forge a virtual community of Trekkers by sharing information and experiences even while apart.

One workshop involved conducting a hop test, a diagnostic tool used in physical therapy. The girls were asked to measure how far they could hop on one foot and then the other, repeating the exercise three times and submitting their data. All data was compiled and then sent back to them, with guidance on how to model the data with their graphing calculators.

Another workshop involved participation in NASA’s Cloud Observation Citizen Science program. With their Kindles, girls took photos of the sky, recording the date, time, city and zip code on a cloud chart form, which they sent to Tech Trek or to the NASA website.

A chemistry workshop included a series of experiments exploring the effects of temperature, time, and catalysts on chemical reactions.

A biology workshop included assembling and creating insect models and studying pollinators such as bees and butterflies in their neighborhood.

In a summer marked by cancelled activities and programs, Tech-Trek-in-a-Box was designed to engage Trekkers in exploring STEM concepts as a group, while still at home. A key aspect was that all workshops could be completed without internet access.

Feedback has been overwhelmingly positive. One enthusiastic Trekker wrote: “Thank you so much for the Tech Trek in a box! I love it and can’t wait to do the experiments and use everything. Thanks for thinking of me this summer!” A mother wrote: “[My daughter] received her Tech Trek box yesterday—and was wow! Was she ever oh-so surprised and delighted … Kudos to the Tech Trek team for knowing how to hook a teen—and quickly!”

Next year AAUW plans to run two separate sessions of Tech Trek: one for the girls who would have attended this year and one for the girls who will be selected next year. In the meantime, AAUW is pleased to be fostering Trekkers’ STEM curiosity by bringing fun camp activities to them this summer. Special thanks go to Honeywell and Facebook, as well as to AAUW members and other donors across the state, for the funding that made Tech-Trek-in-a-Box possible. Additional information is available on the camp’s website (https://techtrek-nm.aauw.net). 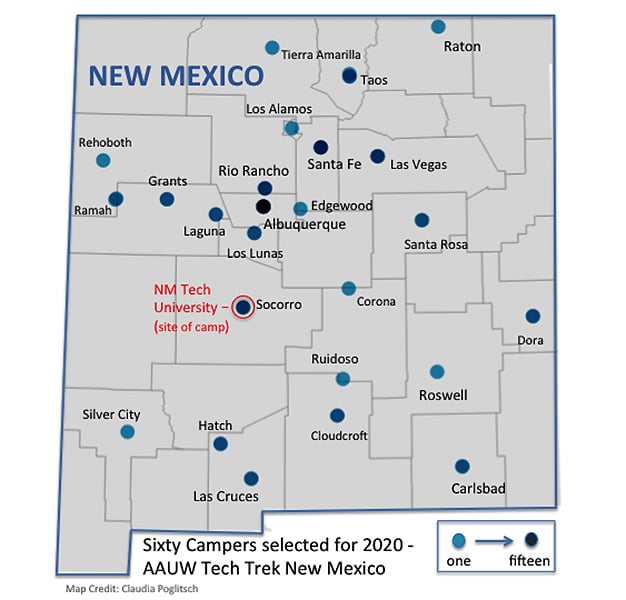 The sixty 2020 Tech Trekkers hailed from across the state. Courtesy/AAUW