Teatro Paraguas: Play By Sen. Bill O’Neill ‘Save the Bees’ 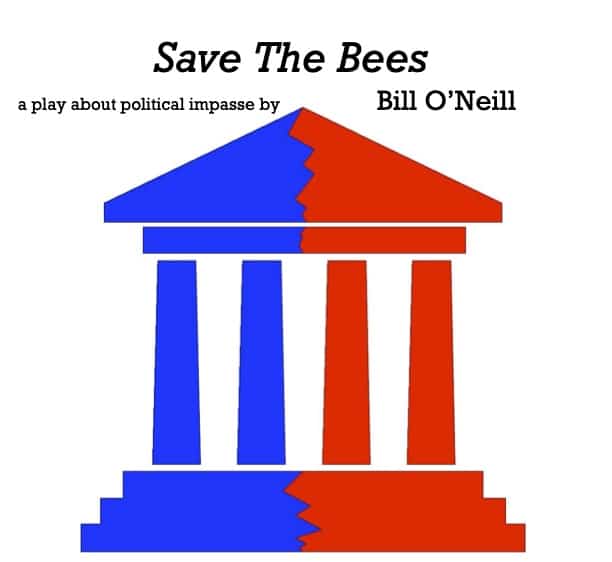 Teatro Paraguas will present “Save the Bees”, a play about political impasse by Sen. Bill O’Neill.

Directed by Duchess Dale, the play is about the difficulty legislators face from their respective partisan bases as they attempt to work across the aisle in the polarized political atmosphere.

“This play has much humor in it, but at the same time is very serious,” Sen. O’Neill said. “It focuses on a friendship between two legislators on the opposite sides as they attempt to navigate these turbulent political waters.”

Geoffrey Pomeroy plays older, urban and liberal Sen. Chapman Murphy. Luke Becker, the younger, rural, and conservative senator, is played by Noah Segard. The two senators speak candidly in an empty legislative chamber about their upbringings, friendship, their constituents, and the divisive issues, which pit both senators and constituents against each other.

O’Neill and State Sen. Cliff Pirtle (R-Roswell) will be present for a Talk-Back after each performance.

O’Neill grew up in rural Ohio and graduated from Cornell University. Elected to the New Mexico Legislature in 2008, he is now in his second term in the New Mexico State Senate. O’Neill’s career has been framed by his work with nonprofits, with a focus on incarcerated juveniles and adults.  https://billoneill.org/

Tickets are $15 suggested donation, with proceeds benefitting Harvest Ministries of Roswell, a non-profit charity fighting homelessness and food insecurity. harvestmin.net. Tickets may be purchased online, or reservations may be made by calling 505.424.1601.