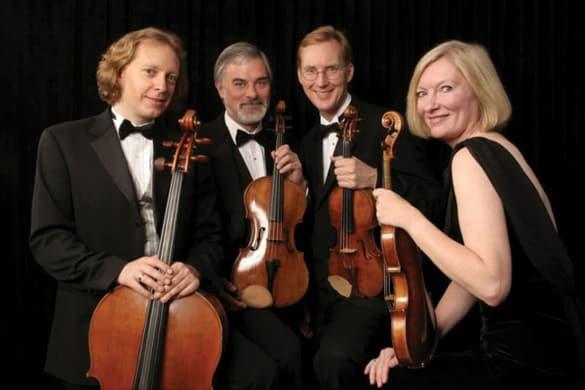 The Taos Chamber Music Group (TCMG) has announced its 26th season of “wild and scenic” music.

Seven different programs take place September 2018 through May 2019, each performed twice in the intimate setting of the Arthur Bell Auditorium at the Harwood Museum of Art where TCMG is the Resident Chamber Music Group.

Over the past quarter century, TCMG has presented an incredibly diverse scope of performances, gaining a reputation for creativity and artistic excellence. Boasting a roster of talented artists from New Mexico and around the country, the group has taken its place with the area’s world-class summer music festivals, such as Taos School of Music and Music from Angel Fire, that make Taos a destination for classical music.

TCMG’s unique flavor is informed by its Artistic and Executive Director Nancy Laupheimer who is known for coming up with programs that have compelling connecting threads. A typical performance balances chamber music favorites with lesser known and contemporary works, and Laupheimer’s collaborative approach keeps TCMG’s vision fresh and innovative. Themes often connect to timely sociopolitical issues as well as to the physical beauty and cultural diversity of the Taos area.

The 26th season opens with “Common Ground” 5:30 p.m. Sept. 22-23. Los Angeles Philharmonic violinist, Vijay Gupta (who is also a TED Senior Fellow, Kennedy Center Citizen Artist and co-founder of Street Symphony), and Street Symphony composer-in-residence, Reena Esmail will be in Taos to bring attention to music as a vehicle for social justice

“Shadow and Light,” TCMG’s program influenced by the natural world, is Nov. 10-11. In December, due to popular demand, there will be three performances, Dec. 14, 15 and 16 of “Beyond Borders,” music that transcends boundaries and reflects the holiday season’s spirit of peace and goodwill.

The new year brings “Good Company with Chatter,” the renowned Albuquerque group whose Sunday morning series combines adventuresome music with poetry and two minutes of silence. The Harwood concerts are 10:30 a.m. and 5:30 p.m. Saturday, Jan. 12 and include poetry by Taosena Olivia Romos.

In March, TCMG bows to the Museum with a program of music inspired by visual artists including Agnes Martin and Georgia O’Keefe, and in April it celebrates the legacy of Chilton Anderson (founder of the Taos School of Music) with pianist Robert McDonald (Taos School of Music’s Artistic Director). The series concludes Mother’s Day weekend with TCMG’s annual “Play it Forward” program that highlights younger musicians and newer music. Allie Norris, a 23-year-old violist, will be featured playing works by her favorite living composer, Kenji Bunch.

All concerts are at Arthur Bell Auditorium at the Harwood Museum of Art in Taos.