TALES OF OUR TIMES: Vivid Images Guard The Earth 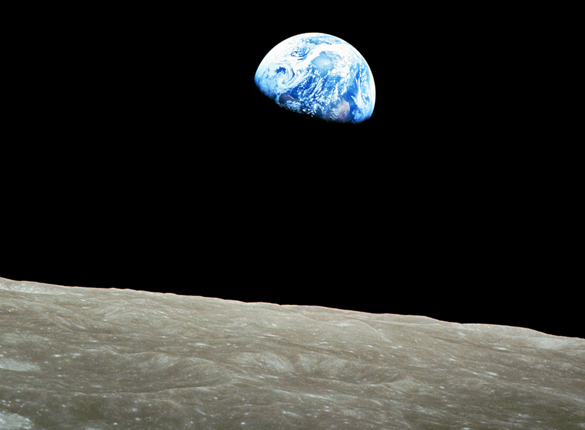 Tales of Our Times
By JOHN BARTLIT
New Mexico Citizens
for Clean Air & Water
Vivid Images Guard The Earth
Today, April 22, is Earth Day, a proper day to admire our town’s brand-new nature center. But keep that in mind for later.
The time is also right to rummage in the root cellar. Some see environmental rules as the first inventive steps toward a stable world. To others, such rules are harebrained humbug dragging us to economic ruin. In better light, they are something else again. Environmental laws bear a strong resemblance to homespun sense remolded in legalese.
The National Environmental Policy Act requires the writing and public review of an Environmental Impact Statement before moving ahead on large federal actions that affect the environment. A radical idea? The advice out of Poor Richard’s Almanac was “Look before you leap.”
The Surface Mining Control and Reclamation Act requires that land tattered by strip mining be restored, replanted and stabilized to save topsoil from wasting away into silted, acidic rivers and dust-darkened skies. Old hat, too. In times past, folks did not teach the value of prompt repair in terms of  “resow and stabilize.” The lesson came in sprightly rhyme: “A stitch in time saves nine.”
“Greens” promote cars that are more fuel efficient. “Recycle” is the word of the Earth-savers. Deep in memories flits a gray-haired woman, industrious about her dresser drawer – sorting boxes of buttons and patches of old linen – while she instructs us sternly, yet cheerily. Her old-time watchword: “Waste not, want not.”
From generation to generation, rural America passed down to us the great insights we call common sense: “Don’t eat your seed corn.” “Don’t burn the house for firewood.”
If sense is common, why hunt whales to near extinction? Why ruin prime fishing grounds with garbage? Knock down watersheds for timber? Why so hard to see the forest for the trees?
As affairs grow large, ties are lost. They are hard to discern when the scope moves to a farther range, out past the corner post on the south forty. Proverbs seem less cogent when the benefits of sense accrue a ways off in space, time and economic ledger. The golden rule cannot reach so far.
So to keep sight of basics, the old truths reappear as environmental laws. Food for thought from the root cellar. … Over the years, our view of the environment changed slowly, for many reasons. Yet in hindsight, the instant of swift change was a single photograph. It is the indelible image taken by Apollo 8 astronauts as they watched planet Earth rise over the moon’s horizon.
We know it well: the bright, blue and cloud-frosted hemisphere, with its sparse land forms, hanging alone in the terrible black void of space. That photograph put our planet in a new perspective. On so sweeping a scale, nothing on Earth is far from the corner post on the south forty. The month was December, nearing Christmas, 1968. Our basic environmental laws, in their legalese, all date from 1969 into the 1970s. Just coincidence … perhaps.
The first Earth Day was in 1970. The idea for it came to Senator Gaylord Nelson of Wisconsin in 1969. No one understands the miracle of an idea. What force suddenly frees the inklings stuck in crannies of minds and lets them re-form into something new? Was the photo of Earthrise from Apollo 8 an inkling? Or a force?
Earth Day had immediate and enduring success, which has grown worldwide.
On this Earth Day, the doors open on the Los Alamos Nature Center and its themes of canyons, mesas, mountains, skies. Visit and support the center and its exhibits. Travel the world of natural science and history that awaits.
Guarding the Earth employs means as old and new as home-taught sense, photos from space, our planet’s name day, the texts of laws and nature centers.
Menu
Los Alamos
34°
Cloudy
7:08am5:27pm MST
Feels like: 28°F
Wind: 5mph S
Humidity: 51%
Pressure: 30.14"Hg
UV index: 0
FriSatSun
36/19°F
43/25°F
41/23°F
Weather forecast Los Alamos, New Mexico ▸