TALES OF OUR TIMES: Herds Print News In Rocks And Politics 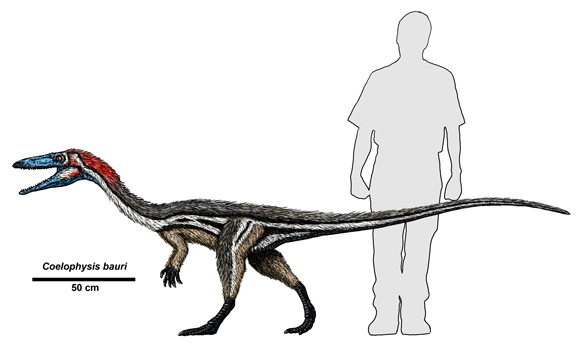 The Coelophysis is the New Mexico state fossil. Courtesy image

The New Mexico state fossil, the Coelophysis (SEE-low-FY-sis), is not your plain everyday dinosaur fossil.

The critter gets no leading roles in movies, though its adventures are top-notch for surprising turns of fate.

Coelophysis was an early dinosaur of the Late Triassic period, some 210 million years ago. History shows that movie fans are drawn more to the Jurassic period, which came later. Bigger dinosaurs make a louder rumble on the big screen.

A brief sketch of Coelophysis shows its features. See an animal half as tall as a man with a tail more than twice that long bounding swiftly across the landscape on two legs. See numbers of them running in a pack or flock.

The name comes from the Greek “koilos,” meaning “hollow.” Coelophysis had hollow, lightweight bones, as birds do, which made it a fast and agile runner. Its eyes were large and well suited for hunting prey. Its sharp, jagged teeth are typical of meat-eaters.

Of all the Earth’s beings, humans have the most peculiar mind for sizing up time and change. One day in 1947 a deposit of fossils came to light by chance in north-central New Mexico. It happened on what was then, and still is, the Ghost Ranch retreat and education center. The fossil deposit eventually proved to be a quarry of over 1,000 Coelophysis fossils.

The numerous whole fossils at Ghost Ranch supplied much more detailed knowledge than the first poor fossil of the dinosaur that was found in 1881, also in northern New Mexico. We see why Coelophysis was named the state fossil, which was done in 1981. By the time humans had evolved far enough to discover fossils, a great many things already had settled down.

For example, in times long past, all the land mass of Earth was near the equator and the world was hotter and more humid. When today’s continents began to move apart, the fossils moved with the land.

Numbers of our state fossil came to rest in modern New Mexico. In one fell swoop, 1,000 and more Coelophysis were killed and preserved at Ghost Ranch. What kind of fell swoop could have brought such a disaster to them and left us such a treasure of knowledge?

Whole fossils are formed only under unusual conditions. Natural forces must prevent predators from eating on the bones and displacing them. Natural decay in oxygen must be impeded as well, as by deep burial.

An event capable of leaving large numbers of animals under suitable conditions is a flash flood and mud slide. Tar pits also do this, but no tar pits are seen at Ghost Ranch. Coelophysis roamed its realm for 15 million years. It saw changes on an Earth-wrenching scale in its time.

Humans have roamed from land to sea, sky and space for a short 0.2 to 1.9 million years, depending on how you define “humans.” The magnitude of changes in this million years is written very large. Yet the changes in many ways are at the same time small.

Modern politics is a running account by one party of the harm spawned by the other party. Rivals spend their time and talents scouting up dire news to blame on the other camp. The rival herds rush to applaud their deeds above all others. Though nobler acts are sparse, I report one: Politics has done better by the Coelophysis than did life.

The fossil record is a different world – a world in which the fates of prehistoric beings are as tangible as the patterns they left in rock.