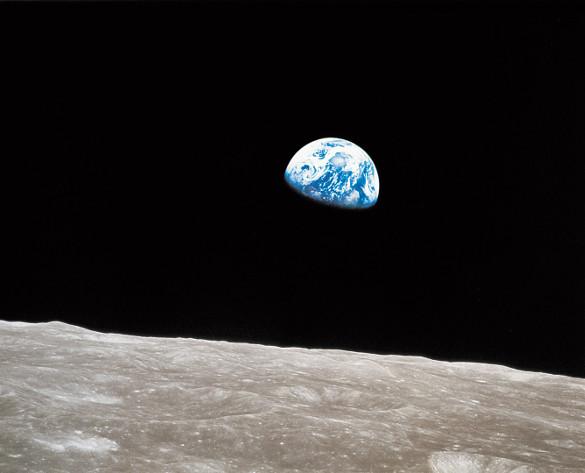 Courtesy/John Bartlit
Tales of Our Times 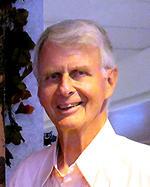 By JOHN BARTLIT
New Mexico Citizens
for Clean Air & Water
Earthrise – 1968, Looking Back 50 Years
Apollo 8, the first manned mission to the moon, entered lunar orbit Dec. 24, 1968, Christmas Eve 50 years ago. It was halfway through the Cold War.
That evening, the astronauts—Commander Frank Borman, Command Module Pilot Jim Lovell, and Lunar Module Pilot William Anders—held a live broadcast from lunar orbit. They showed their pictures of the Earth and moon as seen from their spacecraft.
The photograph above, taken by Anders, came to be titled “Earthrise.” It remains one of the most iconic and influential snapshots ever taken. Yet, iconic to what end?
Said Lovell while orbiting the moon, “The vast loneliness is awe-inspiring and it makes you realize just what you have back there on Earth.” The broadcast ended with the crew taking turns reading from the book of Genesis, chapter 1, verses 1 through 10.
What followed speaks to the many traits of citizens and their rights. For the next few years, a lawsuit was pursued against the U.S. government, alleging violations of the First Amendment to the Constitution, which guarantees freedom of religion and freedom of speech. The suit was dismissed in several courts.
Other effects were less direct, yet more lasting. “Earthrise”—the bright, blue and cloud-frosted hemisphere, with its sparse land forms, risen over the barren moonscape and hanging in the terrible black void of space—was broadcast to Earth on Christmas Eve 1968. Our basic environmental laws, in their legalese, all date from 1969 into the 1970s. Just coincidence … perhaps. The first Earth Day was in 1970. The idea for it came to Senator Gaylord Nelson of Wisconsin in 1969. No one understands the genesis of an idea. What force suddenly frees inklings of ideas that are lodged in crannies of minds and lets them re-form into something large and new? Was the photo of “Earthrise” from Apollo 8 an inkling? Or was it a force?
In thinking about this column, I looked up the U.S. population in 1970 and found it was 213 million. The U.S. population now is 326 million. Then I looked to see the U.S. population in 1920, 50 years before 1970, and learned it was 106 million. The year 1920 was also roughly when the U.S. urban population first exceeded the rural population. I don’t know why seeing the Earth from the moon got me thinking about signs of the human tide, which are not visible in the photo.
I close with words from Commander Borman in that scratchy broadcast 50 years ago on Christmas Eve, “And from the crew of Apollo 8, we close with good night, good luck, a Merry Christmas—and God bless all of you, all of you on the good Earth.”
Menu
Los Alamos
57°
Fair
5:50am8:25pm MDT
Feels like: 57°F
Wind: 0mph WNW
Humidity: 58%
Pressure: 30.19"Hg
UV index: 0
SatSunMon
75/54°F
68/55°F
66/55°F
Weather forecast Los Alamos, New Mexico ▸