Tales Of Our Times: A Crab’s Trip From Tampa Is A Curious Lesson 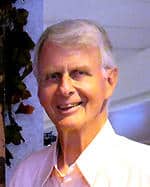 Tales of Our Times
By JOHN BARTLIT
New Mexico Citizens
for Clean Air & Water
One way to appraise an experiment is the value that it has in retrospect. The family experiment told here was run in 2008.
Whether you think animals are cute, scary or dumb, they have one noble feature. They function free of dogma and devoid of ego.
For a special event, dozens of our family members, of all ages, met in Florida. There was time to spend on the beach at Tampa Bay. Shells begged to be found. There were tidal flats for inlanders to explore, one of which lay a short dash from our motel room. So the story begins.
As the time drew near to start home, the grandchildren got into the tidal flat. “Be careful,” we called. To those who know kids and tidal flats, one more fact is key. It was half-tide. At the last minute, a shell was found in the muddy grasses. Its telltale was one side’s handsome, polished passageway to the mysterious inner sanctum. The shell must be left behind if it has a live crab in it.
“Time to go,” we called. At last, bags and riders were fit into the car like big jigsaw pieces. Halfway to the airport, we learned the shell was still with us, in a child’s pocket. Indeed it was also much alive. A grandson’s first guess called it a hermit crab.
Complications brewed. The problem was how to supply portable habitat for taking the crab safely to Albuquerque. Handy resources were a plastic sandwich bag, drinking water and salt. What we lacked was knowledge and measuring tools. Salt or no salt? How much salt to water? What does it like to eat and how much is needed?
Barely eight hours from the tidal flat, the live crab was a local attraction for neighborhood kids in Albuquerque. The next morning, a visit to the pet store yielded information and supplies to make a healthy new home. Days went by. The crab seemed happy … until the fourth day. Then signs changed for the worse. It died of unknown causes in less than a week.
What can we take from the events? The first thing is crabs are a lot of fun, in ways that are different from video games. Crabs relate more to real life than do human action games. Think how strange. Realism sells better with crabs than with humans.
Another question that relates to real life is, why did the crab die? A simplified answer is, from changing its habitat. But simple answers are like bumper stickers: They leave out more than they say. The crab may have died from any or all of several causes. Short of leaving the crab as it was, on the tidal flat, what changes are important to do skillfully? Factors that might affect a crab include how salty the water was made, cabin pressure changes on the flight, how and how often it was handled, or the crab’s age and existing diseases. I say this with knowledge of science and a thorough ignorance of crabs.
How could more be learned about the crab’s trials and fate? A good start is to read about crabs. Try the web at “keeping a pet crab.” Amazing stuff comes in 10 seconds. If consistent, ideas are found in a variety of three or four websites, the information has a good chance of being useful.
People are of stranger molds. The same approach does not work for sorting out the responses bred in human nature. Ask three or four people about humans and you get two or three answers with opposite conclusions. Take action and two people react in exactly opposite ways. Not like crabs.
In the end, this column is not about a hermit crab, but something far more lasting: the mindset of inquiry.
Menu
Los Alamos
34°
Fair
7:14am5:16pm MST
Feels like: 34°F
Wind: 0mph SW
Humidity: 27%
Pressure: 30.19"Hg
UV index: 0
SatSunMon
46/27°F
45/28°F
41/27°F
Weather forecast Los Alamos, New Mexico ▸