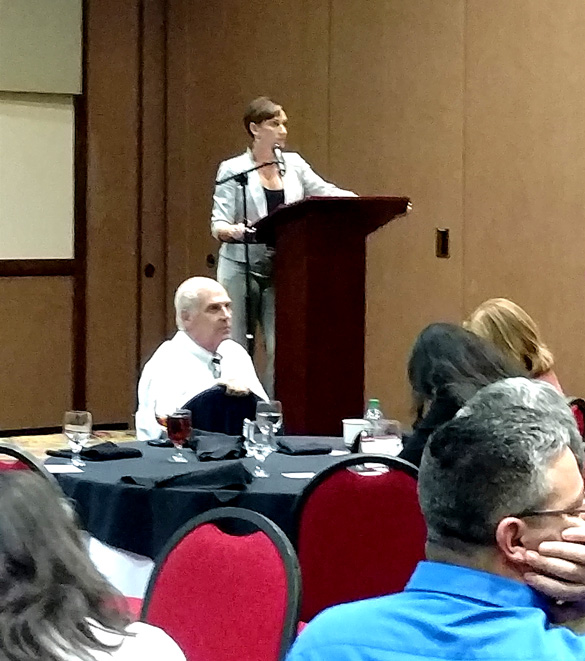 Department Secretary Celina Bussey of the New M exico Department of Workforce Solutions and Alan Webber, owner of One New Mexico, were the keynote speakers for the Sept. 28 Regional Economic Development Initiative’s 2016 summit. By Roger Snodgrass/ladailypost.com 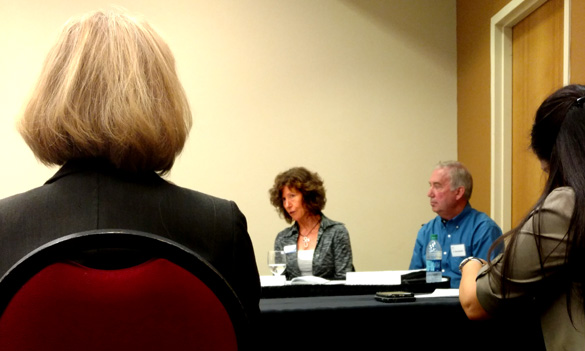 Regina Wheeler, center, of Positive Energy Solar and Steve Buelow, ditector of the New Mexico Consortium participate in a panel on green energy during the Summit. Photo by Roger Snodgrass/ladailypost.com

Secretary Celina Bussey of the New Mexico Department of Workforce Solutions may have the best view of the employment pipeline in the state, even if what she describes is not altogether a pretty picture. But where there are challenges, Bussey likes to believe, there are opportunities.

As one of the keynote speakers at the Regional Economic Development Initiative’s 2016 summit on the topic of “Workforce” Sept. 28 at Ohkay Conference Center, Bussey said the most promising jobs in terms of demand, growth and earnings were in the health and education sector, which is already the second largest segment of the employment pie in New Mexico, second only to government jobs.

The U.S. Bureau of Labor Statistics has estimated that nationally, in the decade from 2014 to 2024, the country will add 3.8 million jobs to the health care and social assistance sector, which is expected to become the largest employment sector, surpassing state and local governments by that time.

Education looks strong because so much is needed. Growth in the older population on the job means people are working longer, or have to work longer, Bussey said. But that trend has created a “bottleneck” for entry-level job-seekers. Along with the rest of the country, “We have the highest rate of youth unemployment we have ever seen,” she said. “We are sitting on one of the largest soon-to-be-working generations among many of our surrounding states – that’s opportunity.”

Huge educational opportunities include meeting the urgent need to remediate learning and skill gaps and confronting the growing inventory of deferred and new concerns.

“The Great Recession was hardest on those with the lowest education,” Bussey said.

Only education can relieve the burdens and social consequences of the long-term unemployed. And what about the onrushing need to prepare for the accelerating pace of change and the surprises not even known yet about tomorrow’s jobs?

Some of these issues, along with an informative section on Occupation Highlights are included in a new Career Solutions page of the Department of Workplace Solutions website:

A more rousing and optimistic perspective came from Alan Webber, the other keynote speaker at the REDI Summit, who was a candidate for the New Mexico Democratic governor nomination in 2014. Webber, who has a background in journalism and a contagious entrepreneurial spirit, co-founded the magazine Fast Company in 1995. His non-profit company One New Mexico promotes and mentors local business development around the state.

Webber wrote an article in the July 2016 issue of Green Fire Times, calling for an economic transformation in New Mexico, by fostering 10 “microeconomies,” that would be mutually supportive and more resilient.

For example, he wrote, “It’s time for us to lead the nation in renewable energy: solar wind, hydrothermal and the cheapest source of energy – conservation.” The result is multiple wins: more jobs, cheaper electricity and more local control over our own energy future. Another micro economy that he describes has to do with water: “New Mexicans have always known that water is scarce and precious. Water is precious. Now the whole world is learning this lesson. We should be able to create good jobs in New Mexico out of the hard truth of water scarcity.”

Versions or components of several of these suggestions were included as “target clusters” in the morning’s two breakout sessions. There were panels on technology, the state’s teacher shortage, film, outdoor recreation and tourism, healthcare, entrepreneurship, value-added agriculture and green technology.

Webber charged the participants in each of the clusters to imagine they are in a business competition, getting ready to launch Northern New Mexico as a startup. “What is our vision that no one can copy and how is it different than anyone else?”

Panel members familiar to the Los Alamos community included Regina Wheeler, who captained the land fill transfer (Eco Station) project that was finished in 2008 in Los Alamos County. She is now the CEO of Positive Energy Solar with offices in Albuquerque, Santa Fe, Las Cruces, and most recently in Los Alamos as well. She said the company is the largest solar installer in the state with 85 employees and that the topic of workforce development was very central to their company.

“It’s our people who make us successful, because we absolutely rely on every single person in our company to be watching out for our business and solving problems and delivering the best customer service and highest quality solar they can deliver,” she said.

Steve Buelow, the director of the New Mexico Consortium described his facility at the edge of Los Alamos as having a very broad spectrum of activities including education, research and economic development and with a very broad research portfolio specializing in green energy.

“We’re focused on the fundamental aspect of how to improve harvesting of solar energy and converting it into chemical products,” he said, offering a glimpse of one aspect of the research. “At noon plants can only use 1/8 of all the light that’s hitting the plant, and most of it is going to repair the damage that’s being done by the extra light they’re harvesting. So we have plant engineers that have modified plants so they shrink their light harvesting antenna when the sun is strong and increase the light harvesting antenna when it’s not strong … and we get increased efficiency by a factor of two by doing that.”

The REDI summit is an annual event for tracking and sharing progress among the partners and members of the community. The Regional Economic Development Initiative is a cooperative partnership of Northern New Mexico governments and Pueblos.