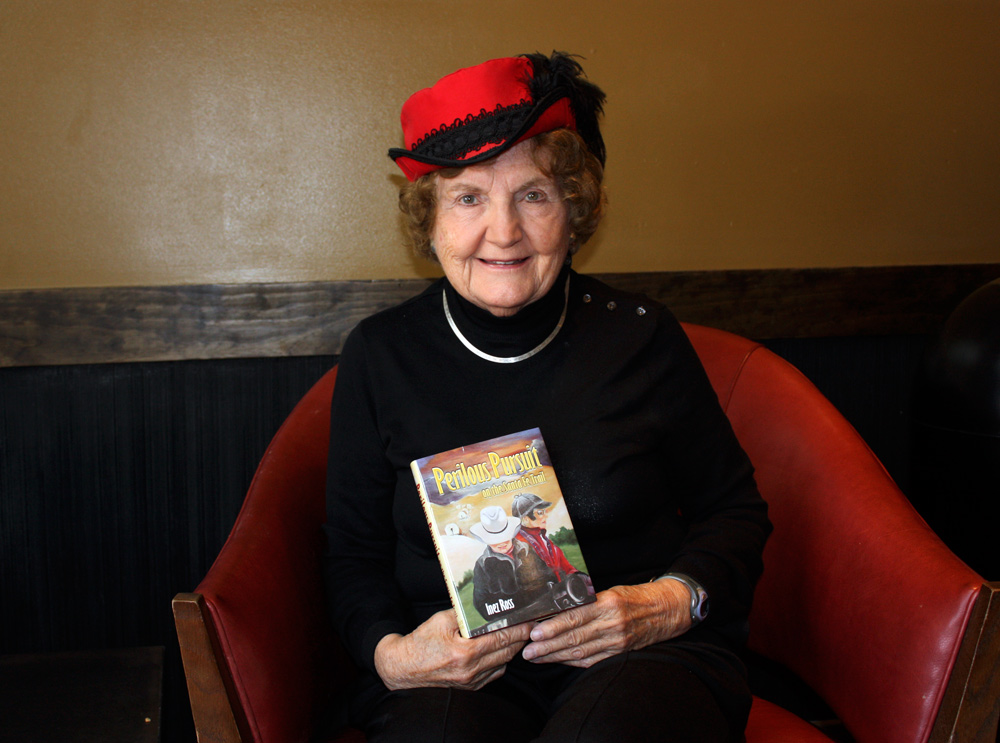 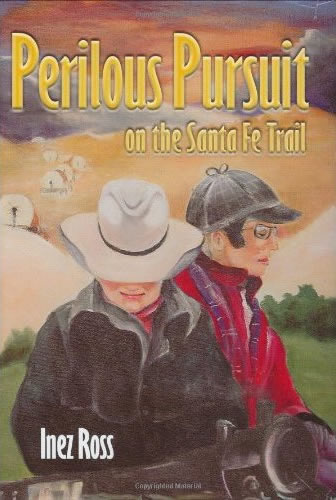 Inez Ross first published “Perilous Pursuit on the Santa Fe Trail” in 2005, shortly after completing an eight year quest to hike the entire Santa Fe Trail. The book is a hardback with cover drawn by D’anne Andrykovich, a well-known Michigan artist.

“Perilous Pursuit” is a modern mystery that recasts Sherlock Holmes and Dr. Watson as Sheila Jones and Dora Watling, two single women in their middle years. Like Holmes, Jones is brilliant and eccentric, while Watling is her more down to earth assistant. Jones and Watling accomplish a lot although people constantly underestimate them.

Young Helen Stoner engages Jones and Watling to help her prove that Stoner’s stepfather, Sydney Roylott, is trying to kill her in order to claim her inheritance.

Helen is writing her history thesis on the Santa Fe Trail, and her stepfather is also an expert on the Trail. While they were growing up, Roylott sent Helen and her sister on elaborate treasure hunts, and he now wants her to go on such a hunt along the Santa Fe Trail. Helen is afraid to refuse, but also hopes to catch her stepfather in setting up  murderous traps for her, by having Jones and Watling take the trip with her.

The trio travel to Franklin, Mo. where the Santa Fe Trail begins, and they take it the entire length, ending at the La Fonda Hotel on the Plaza in Santa Fe.

The mystery involves thrills, chills, near escapes, and even a ghost. “I think a ghost always makes things intriguing,” Ross said. “Although this ghost is fictional, there are many locations along the Santa Fe Trail that are rumored to be haunted.”

What makes it really entertaining is Ross’ extensive knowledge of the geography and history of the Santa Fe Trail. As they follow the clues left by Roylott, Helen and the detectives visit most of the major historic sites on the route and learn a lot about the real Trail. The reader tags along and gets a history lesson as well.

During their journey, the trio meets a group of Trail hikers. Anyone who has read Ross’ “Without A Wagon,” the non-fiction story of the five women who actually hiked the entire Trail, will recognize the group from that story. Ross is called only “The Trail Boss,” but the other four hikers are referred to with their actual names.

Helen and the detectives drive, walk, take the train, and even join a wagon train reenactment with a group of Trail buffs. Since the Santa Fe Trail was a commercial route, the wagons were full of trade goods, and the traders walked. It’s this kind of information that makes the book so interesting.

“I hope reading the book will entice people to visit the sites,” Ross said. “Even though the story is fiction, the places are real!”

Ross often sells her books aboard Amtrak’s Southwest Chief to rail passengers. Her novels make perfect light reading and give visitors some local color. This one especially fills the bill. It’s about the right length for a trail trip, it’s fun to read, and it will teach those visiting the Southwest a lot about the Santa Fe Trail as well.

Order the book from Ross by emailing her at inezaross@gmail.com, or save the postage fee by meeting her in downtown Los Alamos to have her sign and personalize the book for you or the gift recipient. Visit Ross online at http://www.inezross.com/.