Take Time To Thank A 911 Dispatcher This Week 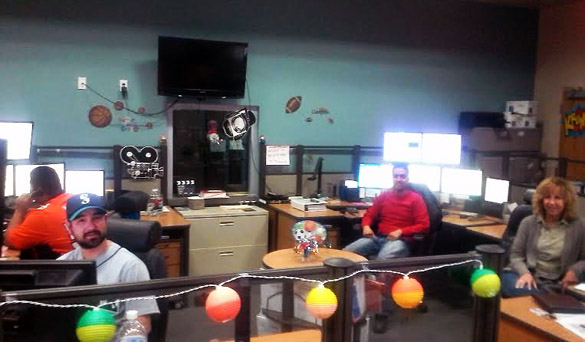 Each year, the second full week of April is dedicated to the people who serve as public safety telecommunicators.

“National Public Safety Telecommunicator Week was introduced in Congress in 1991 as a way for citizens to give praise and admiration to the 9-1-1 dispatchers who help keep their communities safe. 9-1-1 is the universal number in North America for emergency assistance. It can be dialed from a land line, cellphone, payphone, or in some locations by voice-over-Internet.

Being a 9-1-1 Public Safety Telecommunicator is a tough career that not everybody can perform. When they go home at the end of the shift, if they can say, “all my responders went home today,” or “I helped someone out today,” or “I made a difference today,” they consider that a good day.

As a 9-1-1 emergency dispatcher, their training, experience, compassion and composure are in preparation for “the call,” and they all know that it is not a question of “if” they will get “the call”, it is just a question of “when”.

Below is a letter written by a police chief in 1995 in honor of 9-1-1 dispatchers and the job they do on a daily basis.

Someone once asked me if I thought that answering telephones for a living was a profession.

I said I thought it was a calling. “And so is dispatching.”

I have found in my law enforcement career that dispatchers are the unsung heroes of public safety. They miss the excitement of riding in a speeding car with lights flashing and sirens wailing. They can only hear of the bright orange flames leaping from a burning building. They do not get to see the joy on the face of worried parents as they see their child begin breathing on its own, after it has been given CPR.

Dispatchers sit in darkened rooms looking at computer screens and talking to voices from faces they never see.

It’s like reading a lot of books, but only half of each one.

Dispatchers connect the anxious conversations of terrified victims, angry informants, suicidal citizens and grouchy officers. They are the calming influence of all of them — the quiet, competent voices in the night that provide the pillars for the bridges of sanity and safety.

They are expected to gather information from highly agitated people who can’t remember where they live, what their name is, or what they just saw. And then they are to calmly provide all that information to officers, fire fighters or paramedics without error — the first time, and every time.

Dispatchers are expected to be able to do five things at once — and do them all well. While questioning a frantic caller, they must type the information into a computer, tip off another dispatcher, put another caller on hold, and listen to an officer run a plate for a parking problem.

To miss the plate numbers is to raise the officer’s ire; to miss the caller’s information may be to endanger the same officer’s life. But the officer will never understand that.

Dispatchers have two constant companions, other dispatchers and stress. They depend on the one, and try to ignore the other. They are chastened by upset callers, taken for granted by the public, and criticized by officers. The rewards they get are inexpensive and infrequent, except for the satisfaction they feel at the end of a shift, having done what they were expected to do.

Dispatchers come in all shapes and sizes, all races, both sexes, and all ages. They are blondes, and brunettes, and redheads. They are quiet or outgoing, single or married, plain, beautiful or handsome. No two are alike, yet they are all the same.

They are people who were selected in a difficult hiring process to do an impossible job. They are as different as snowflakes, but they have one thing in common. They care about people and they enjoy being the lifeline of society–that steady voice in a storm–the one who knows how to handle every emergency and does it with style and grace, and uncompromised competence.

Dispatchers play many roles: therapist, answer man, doctor, lawyer, teacher, weatherman, guidance counselor, psychologist, priest, secretary, supervisor, politician, and reporter. And few people must jump through the emotional hoops on the trip through the joy of one caller’s birthday party, to the fear of another caller’s burglary in progress, to the anger of a neighbor blocked in their drive, and back to the birthday caller’s, all in a two minute time frame.

The emotional roller-coaster rolls to a stop after an 8 or 10 hour shift, and they are expected to walk down to their car with steady feet and no queasiness in their stomach–because they are dispatchers.

If they hold it in, they are too closed. If they talk about it, they’re a whiner. If it bothers them, it adds more stress. If it doesn’t, they question themselves, wondering why.

Dispatchers are expected to have the compassion of Mother Teresa; the wisdom of Solomon; the interviewing skills of Oprah Winfrey; the gentleness of Florence Nightingale; the patience of Job; the voice of Barbara Streisand; the knowledge of Einstein; the answers of Ann Landers; the people skills of Sheriff Andy Taylor; the humor of David Letterman; the investigative skills of Sgt. Joe Friday; the looks of Melanie Griffith or Don Johnson; the faith of Billy Graham; the energy of Charro; and the endurance of the Eveready Bunny.

Is it any wonder that many drop out during training?

It is a unique and talented person who can do this job and do it well. And it is fitting and proper that we take a few minutes or hours this week to honor you for the job that each of you do. That recognition is overdue, and it is insufficient … But it is sincere.

I have tried to do your job, and I have failed.

It takes a special person with unique skills. I admire you and I thank you for the thankless job you do.

You are heroes … And I am proud to work with you.

PST Week runs this week (April 12 through April 18); if you get a chance and know a 9-1-1 dispatcher, thank them for the service they provide.

“Thank You” to all of our staff here at Cumberland County 9-1-1 Communication Center. I also extend this thank you to the police dispatchers in Vineland, Millville, Bridgeton and state police stations throughout our county for a job well done.