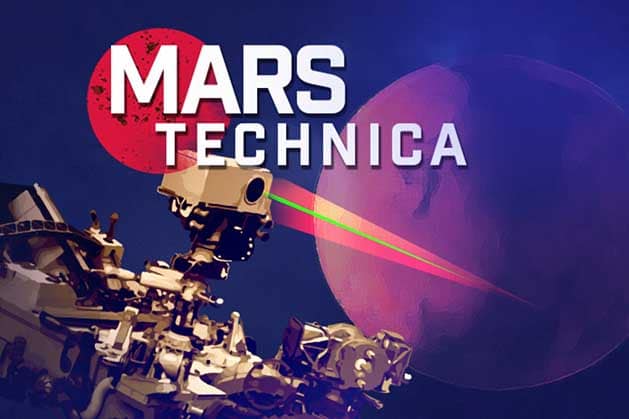 Mars Technica podcast gives listeners a virtual peek inside the most versatile instrument aboard the Perseverance rover. Courtesy/LANL
LANL News:
NASA’s new Perseverance rover, which just started its seven-month journey to Mars, carries on board what is likely the most versatile instrument ever created to understand the planet’s past habitability: SuperCam—and a new podcast will tell listeners all about it.
“SuperCam sits on the rover’s mast and has a laser that can zap rocks up to 25 feet away,” said Roger Wiens, who leads the SuperCam team at Los Alamos National Laboratory, where the instrument was developed. “It analyzes the chemistry and mineralogy of the rocks on Mars, which can tell us a lot about whether the planet could have once harbored life.”
SuperCam also boasts a microphone, which will provide the first-ever recorded sounds from the surface of the Red Planet.
Podcast guests include Wiens and Patrick Gasda, another member of the SuperCam team.
This is the second episode of Mars Technica, a new seven-series podcast produced by Los Alamos National Laboratory, which delves into the Lab’s role on the Mars Perseverance mission.
Upcoming episodes explore topics including signatures of life, what secrets rock varnish might hold, and the unique battery that powers Perseverance. Stream episodes via the Mars Technica website at https://www.lanl.gov/newsroom/podcasts/index.php.
You will also be able to find and subscribe to Mars Technica on Apple Podcasts, with more platforms to come.
About Los Alamos National Laboratory
Los Alamos National Laboratory, a multidisciplinary research institution engaged in strategic science on behalf of national security, is managed by Triad, a public service oriented, national security science organization equally owned by its three founding members: Battelle Memorial Institute (Battelle), the Texas A&M University System (TAMUS), and the Regents of the University of California (UC) for the Department of Energy’s National Nuclear Security Administration.
Los Alamos enhances national security by ensuring the safety and reliability of the U.S. nuclear stockpile, developing technologies to reduce threats from weapons of mass destruction, and solving problems related to energy, environment, infrastructure, health, and global security concerns.
Menu
LOS ALAMOS