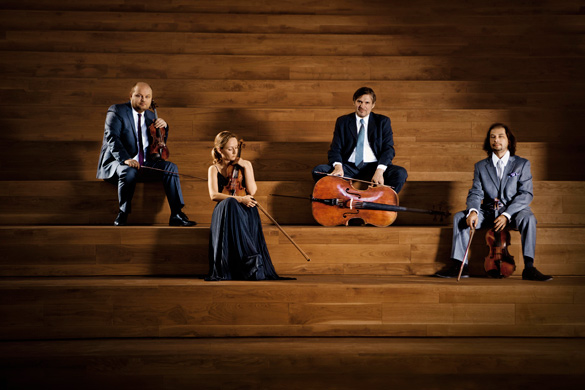 Founded in Warsaw in 1995, the Szymanowski Quartet has developed into one of the most exceptional international string quartets of its generation. Their sophisticated programs present a perfect balance between intellect and passion, characteristics with which the Szymanowski Quartet captivates its audiences at prestigious festivals and concert halls in Europe, the United States, Asia, Australia and South America.

In 18th century Austria, a divertimento could be the title of almost any kind of instrumental music.  Essentially, it is music of a light, diverting, and entertaining character, often intended for outdoor events such as summer banquets or celebrations. Mozart wrote about four-dozen pieces that fall into this category, from single movement marches to the famous Eine Kleine Nachtmusik. These works contain anywhere from one to eight movements, written for wind band or string ensemble, or any combination of these. Mozart wrote three divertimenti for string instruments, K. 136, 137 and 138, in Salzburg in 1772 when he was just a teenager. These works have enjoyed equal popularity as string quartets and as works for string orchestra.

Nocturne and Tarantella, Op. 28 is originally for violin and piano (1915) and was arranged for string quartet by Myroslav Skoryk (b. 1938).

Szymanowski is the most celebrated Polish composer of the early 20th century. He loved to travel, and his experiences in Europe, North Africa, the Middle East and America provided inspiration for his music. His early musical compositions were influenced by the late Romantic German school of Wagner and Strauss. During his middle years, he was inspired by the French impressionistic style of Debussy and Ravel. Later, his native folk music and his fellow countryman Chopin were important influences in his music.

Szymanowski‘s Nocturne and Tarantella was sketched during a single evening of drinking with friends. It’s a colorful work with impressionistic overtones, a rhythmic vitality suggestive of Stravinsky, and full of the flavors of the Middle East.

In 1781 Haydn composed a set of six string quartets published as Opus 33. The publication bore a dedication to the “Grand Duke of Russia,” and so these quartets are commonly known as the “Russian Quartets.”

With the String Quartet, Op. 33, No. 2 “The Joke,” Haydn builds the good-natured first movement upon a simple rhythmic gesture, illustrating his ability to construct a movement from the smallest musical snippet. The second movement Scherzo consists of two dances, one graceful and the other a heavy-footed folk dance. The third movement alternates between two themes: one flowing and melodic, a lovely, pastoral melody; and the other a dramatic chordal and rhythmic theme that banishes any sense of fun. With the fourth movement comes the joke. Like the famous movement in his Surprise Symphony, intended to startle snoozers, the joke is on the audience.

Dvořák came from the northeastern Czech Republic, then part of the Austrian Empire. He valued his country’s folk music, which infused his compositions with the spirit of his native culture. Two other forces also influenced him: the Viennese classical tradition, stretching from Mozart, Haydn and Beethoven to his friend Johannes Brahms; and the Native American songs and African American spirituals he heard during his visit to America (1892-1895).

Dvořák’s 14 string quartets are regarded as one of the finest sets of 19th century string quartets. He composed his last two quartets simultaneously, starting on No. 14 while he was in New York. After sketching the first movement, Dvořák returned home to Prague and began afresh with a new string quartet, No. 13. He finished No. 13 and then continued with No. 14. It was to be his last string quartet. From here he devoted himself to symphonies and opera.