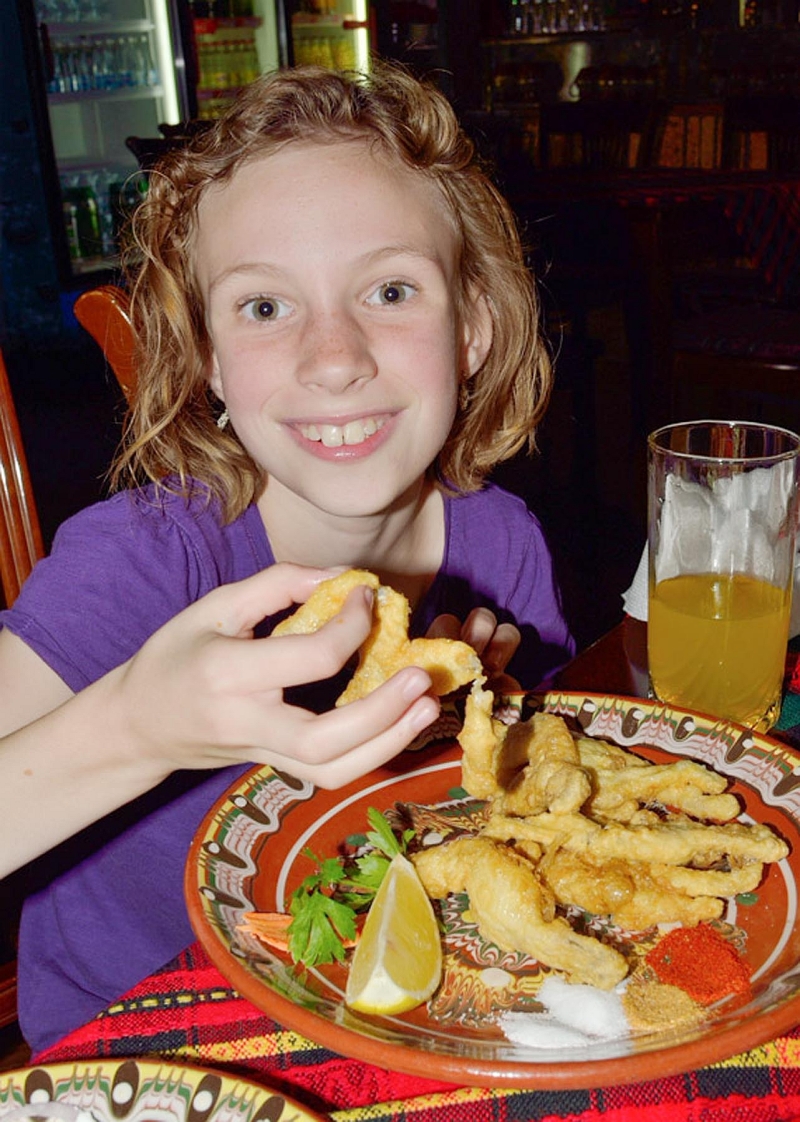 Over the past year, Sydney, our grandaughter, traveling the world with her parents has blogged about different foods: Foods of the Netherlands, Foods of  Poland, and now foods of Turkey. She was eight when then began their travels and turned nine in September. What amazes me is that this 8/9 year old is willing to try all these different foods. When they were in Bulgaria, she tried frog legs, which she proclaimed “They were really good.”

I am not sure her mother would have been so willing at the same age to be so adventuresome with food, and neither would I. But what better way to experience culture than through food. In addition to being a food critic, she is learning to cook. So here is Sydney’s blog about Foods of Turkey.

Have you ever been to Turkey? Well if you have then you know how good the food is. If you have not been there then you are missing out. Here are some foods that you have to try. 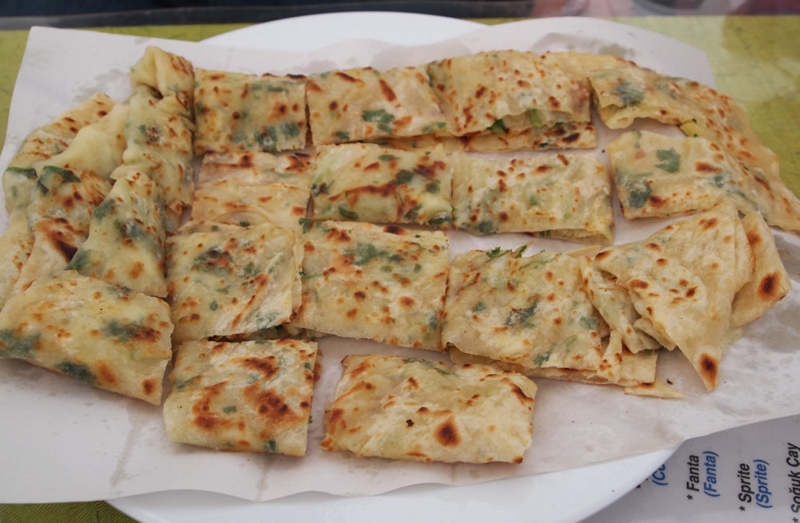 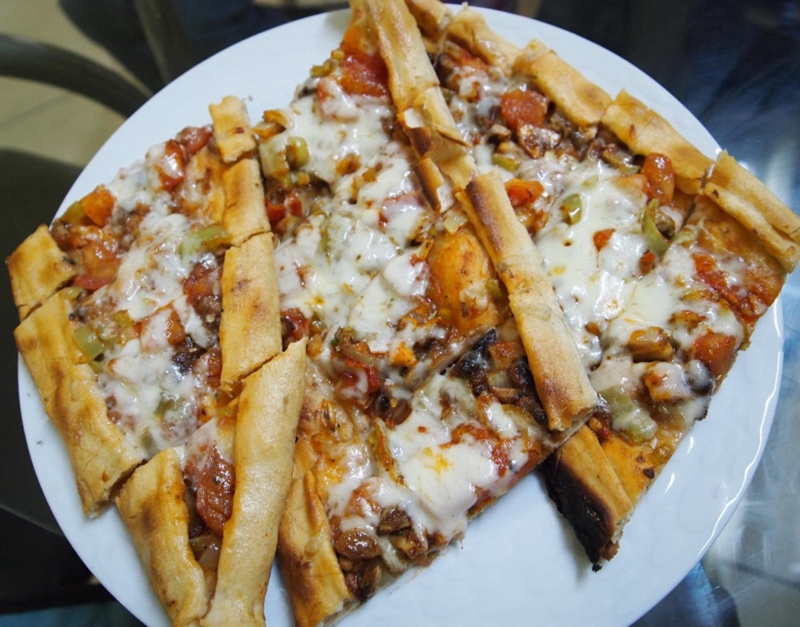 Pide: Pide is Turkish pizza. Its shape is like a boat. If you like pizza then you will like this. We had a vegetable and meat and cheese pide. It was pretty good. 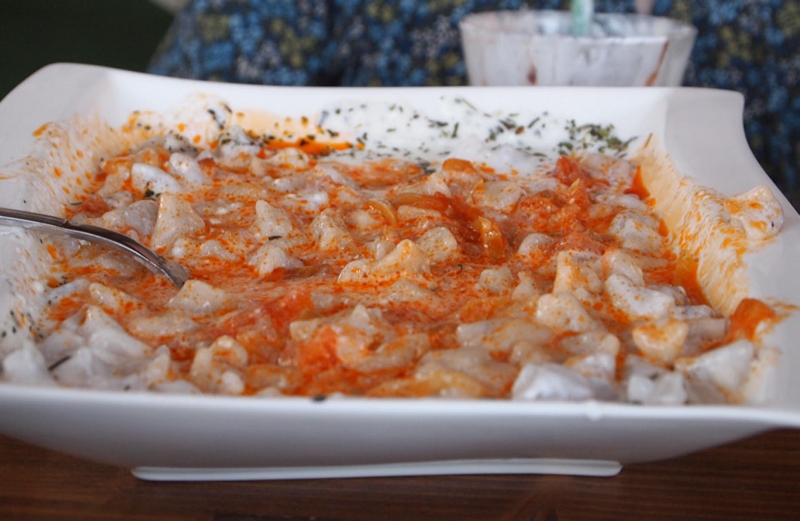 Manti: Manti is known as Turkish ravioli, however manti does not look like regular ravioli. It is filled with garlic, minced meat, and lamb. It is generally served with yogurt on top of it. I prefer no yogurt. It is very good. 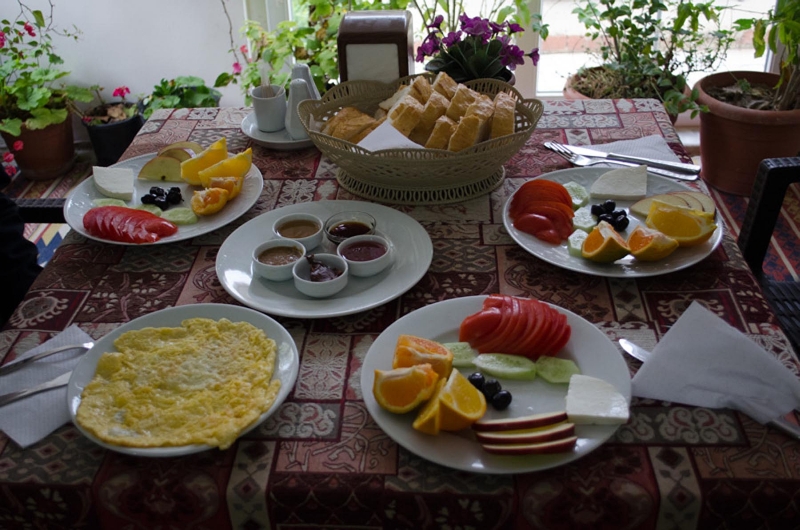 Turkish Breakfast: Do you know what the Turkish have for breakfast? Well, I will tell you. The Turkish breakfast includes some bread, cheese, a hardboiled egg, olives, cucumbers, and tomatoes. Sometimes there will be some plain yogurt. Sometimes you will find that soup is served for breakfast. I did not like it. 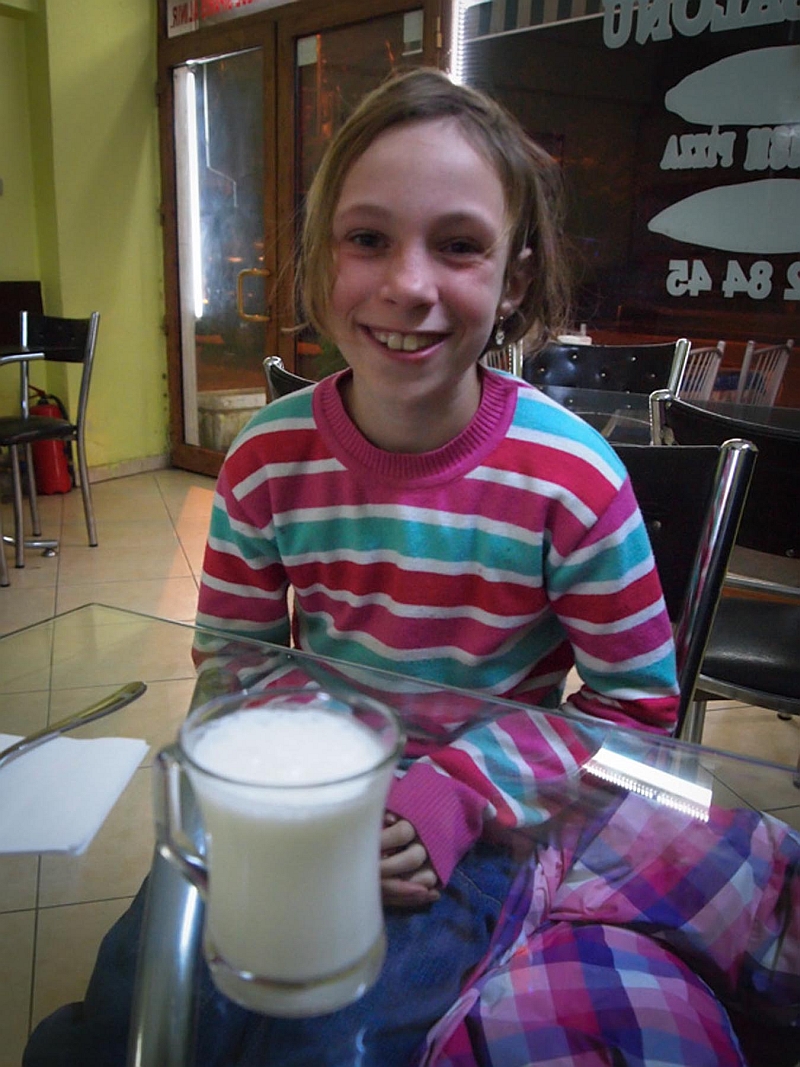 Ayran: Ayran is a salty yogurt drink. It has milk, yogurt, and salt in it. I think it is NASTY! 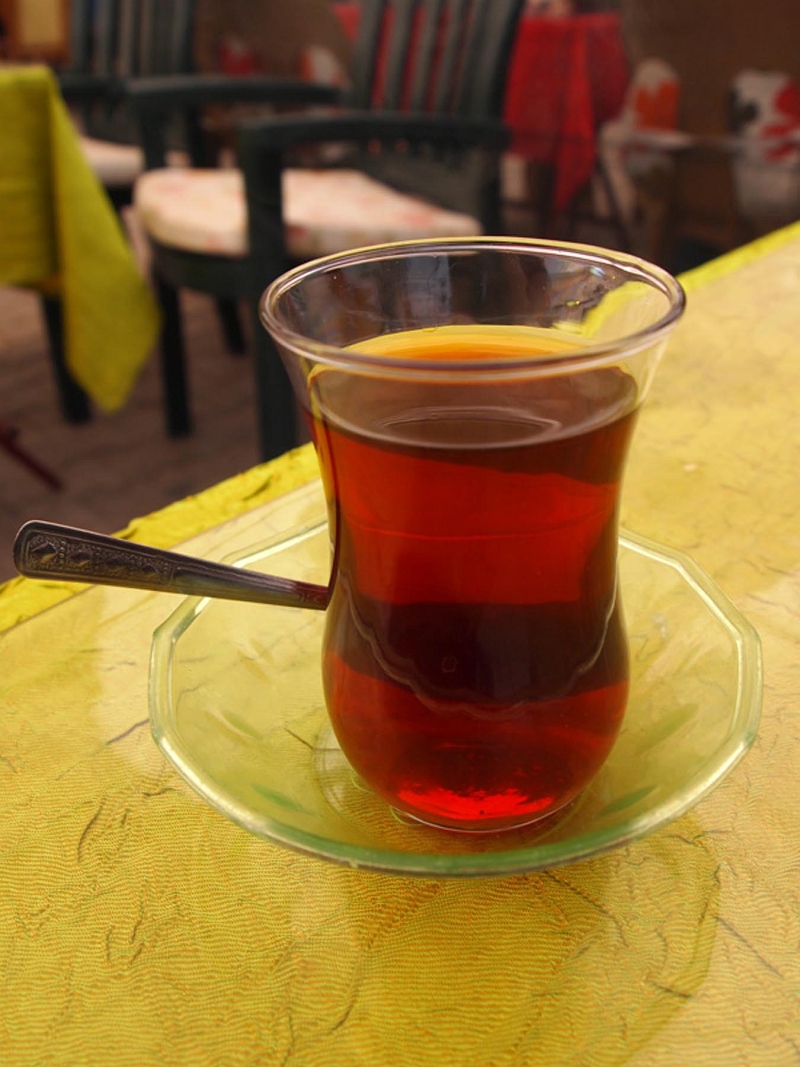 Turkish Tea: Turkish tea is very bitter. No matter how much sugar there is in there, it stays bitter. I do not like it. 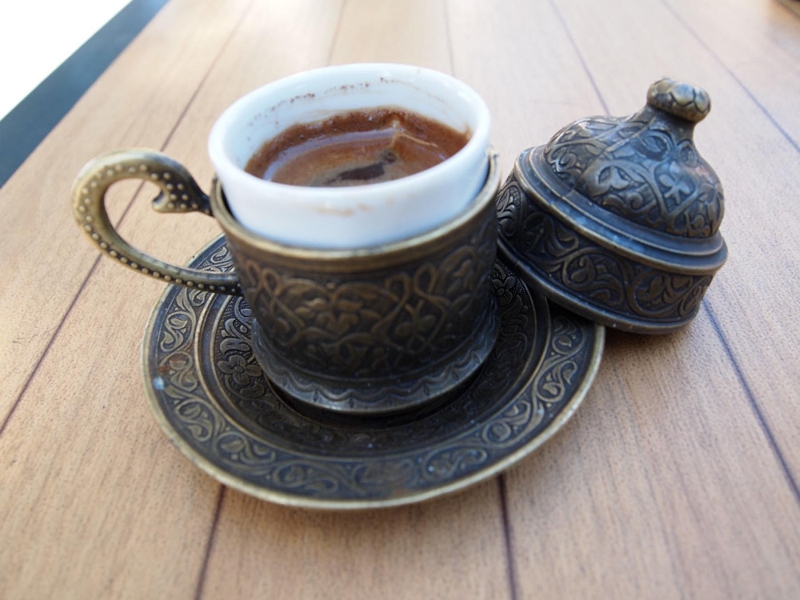 Turkish Coffee: It super bitter coffee. At the bottom it tastes like mud. I do not like it. 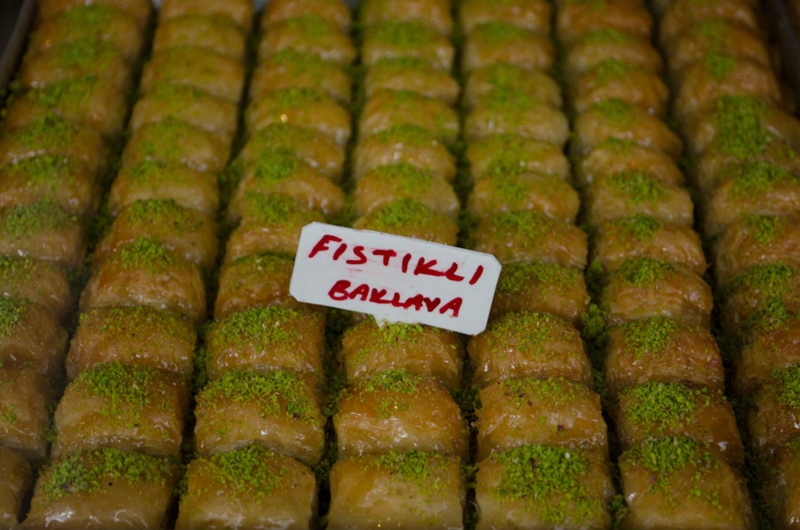 Baklava: Baklava has a pastry crust filled with stuff. It is topped with sugar water. It is too sweet for me. 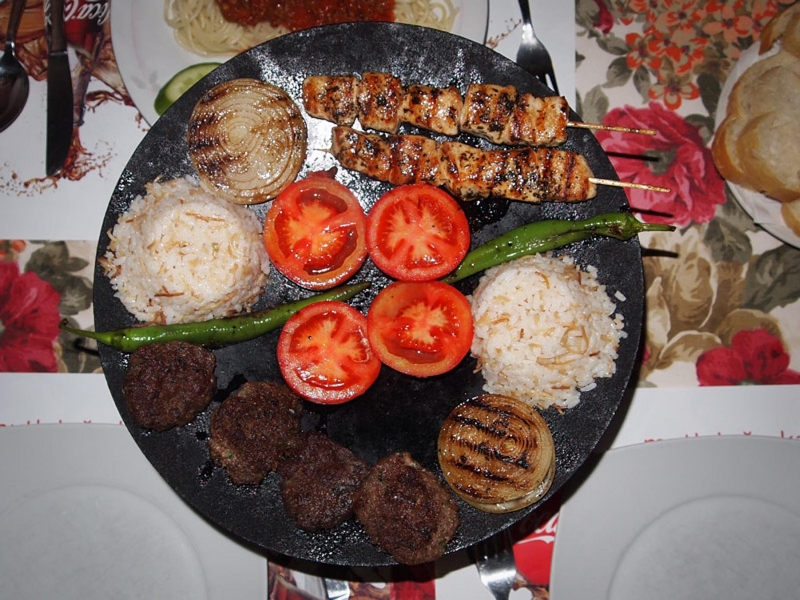 Shish Kebab: It is fried meat on a stick. If you order kebab it does not have a lot of flavor in it. 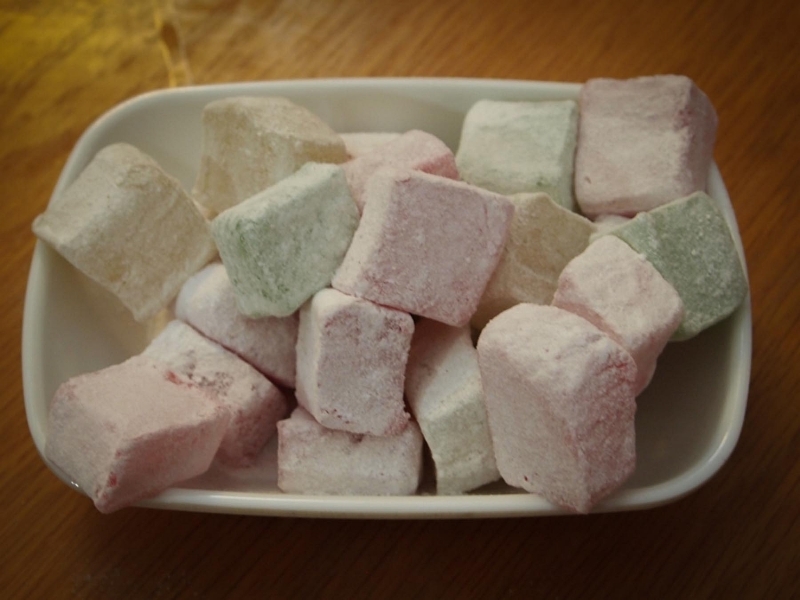 Lokum: Lokum is also known as Turkish delight. It is sweet, sticky and sticks to your teeth. It is covered with sugar powder. I loved it!

Now that I am done talking about foods you are going to learn how to make Turkish delight.

Directions for how to make Turkish delight. In a nine inch baking pan, grease sides and bottom with oil. Line the pan with wax paper and grease the wax paper. In a saucepan put lemon juice, sugar, and 1 ½ cups water. Put on medium heat. Stir constantly until sugar dissolves. Allow it to boil. Reduce heat to low and simmer until it reaches 240 degrees. Remove from heat and set aside. Combine cream of tartar, 1 cup cornstarch and remaining water in saucepan.

Put on medium heat. Stir until all lumps are gone and mixture begins to boil. Stop stirring when mixture has a glue like consistency. Stir in the lemon juice, water and sugar mixture. Stir constantly for about 5 minutes. Reduce heat to low and allow it to simmer for about 1 hour. Stir mixture frequently. Once the mixture has become a golden color, add rose water. Poor mixture into waxed paper lined pan. Spread evenly and allow it to cool overnight. Once it has cooled, mix together powdered sugar and remaining cornstarch. Turn over pan onto a counter or table and cut into 1 inch pieces. Coat with powdered sugar mixture.