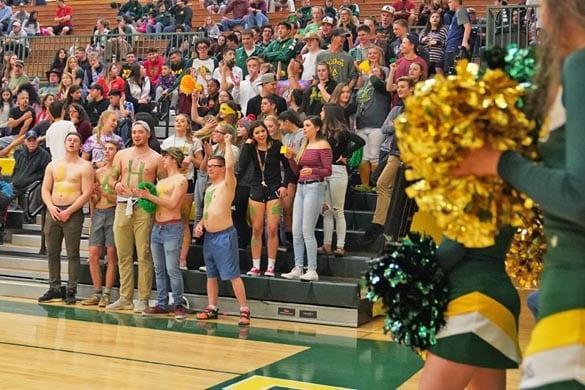 Whenever the Espanola Sundevils come to play in Griffin Gym, excitement fills the air. Both sides of the bleachers are always near capacity with cheering fans. This game was no exception. The Sundevils are ranked in the top five class for the state and wasted no time showing the crowd how good they are. Photo by John McHale/ladailypost.com 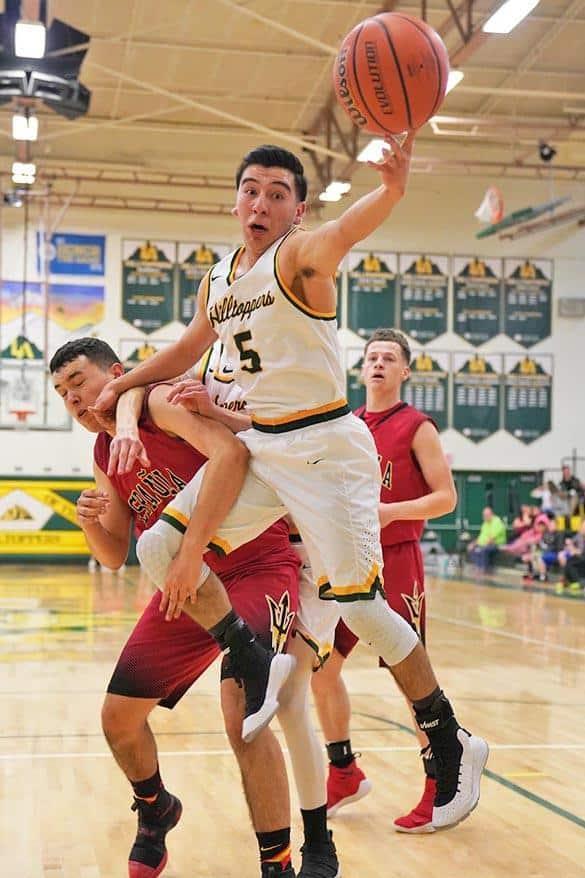 Antonio Trujillo reaches for a loose rebound under the ‘Topper basket in the fourth quarter. Trujillo was the high point man for the ‘Toppers with 15 points. Photo by John McHale/ladailypost.com

For seven seniors, Wednesday night was to be the last time they would suit up as members of the varsity Hilltopper basketball team in Griffith Gymnasium. The opponent was not only the top team in 5A, but also the bitter rival from down the hill, the Española Sundevils.
It wasn’t the seniors, but members of next season’s team who shined brightly on this Valentine’s Day match up. The Hilltoppers lost the game 91-69, but David Owen, Gavin Campos, Gabriel Holesinger, Brian Irwin, and even Matthew Owen put up a valiant fight in the fourth quarter. They outscored the Sundevils, who still had their starters in the game, 19-15 to close out the home portion of the season.
“Our non-seniors have often said, ‘we’re not going to be near as good next year’ but I keep telling them ‘I think you guys are going to be fine.’” Head Coach Mike Kluk said after the game. “If we can get Gabe [Holesinger] in the weight room over the summer, he can be a force next season. And our younger guys are coming along, so they’ll be alright [next season].”
As for this contest, Española Valley jumped out to a quick start, which was all they needed. At the end of the first quarter the Sundevils held a 19-6 advantage. Senior Ramon Roybal picked up two quick foul calls and received a technical foul in the first quarter after arguing a call. Roybal would eventually foul out of the game after playing only a handful of minutes and dropping a single field goal on the night.
The officials made sure to make themselves known in the game with both teams combining to shoot 57 free throws. The normally-level headed Los Alamos team was called for two technical fouls as well.
The ‘Toppers and Sundevils played even basketball the rest of the way with the state’s top-ranked 5A team only outscoring Los Alamos by nine in the final three quarters.
“We played right with them,” Kluk said. “We missed eight gimmes, so that’s 16 points right there. We really shouldn’t have been down more than four points [at the half] if we could just take care of ourselves.”
When asked if emotions played a role in the final home game for his seniors, Kluk said, “I think they know they lost control of this game and that’s not what we hoped would happen. We had some frustration, two seniors got T’d up tonight, they wanted to do better in this game, try to get out of here beating Española one last time. There was a certain amount of frustration.”
The second technical foul of the night came very early in the fourth quarter when Senior Antonio Trujillo drove the lane to the basket and got poked in the eye. The official right on top of the action said it was a clean steal by the Sundevils, and when Trujillo tried to talk with the official, a technical foul was assessed.
Trujillo would sit out the rest of the game, but managed to lead the ‘Toppers with 15 points in just over three quarters.
Campos finished with 13 points and Michael Naranjo ended the night with 10 points as the only ‘Toppers to score in double figures.
The ‘Toppers close out the regular season at 7 p.m. Saturday at Capital High School, and play at 5:30 p.m. Monday at Albuquerque Academy in the District 2-5A tournament. 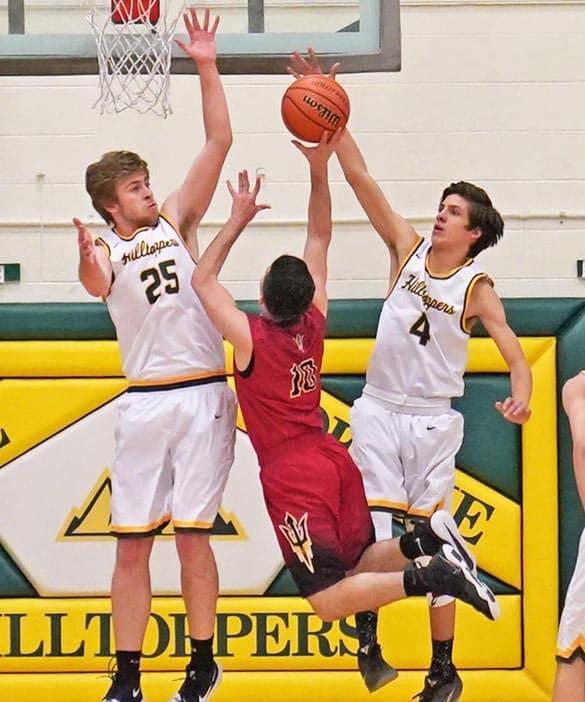 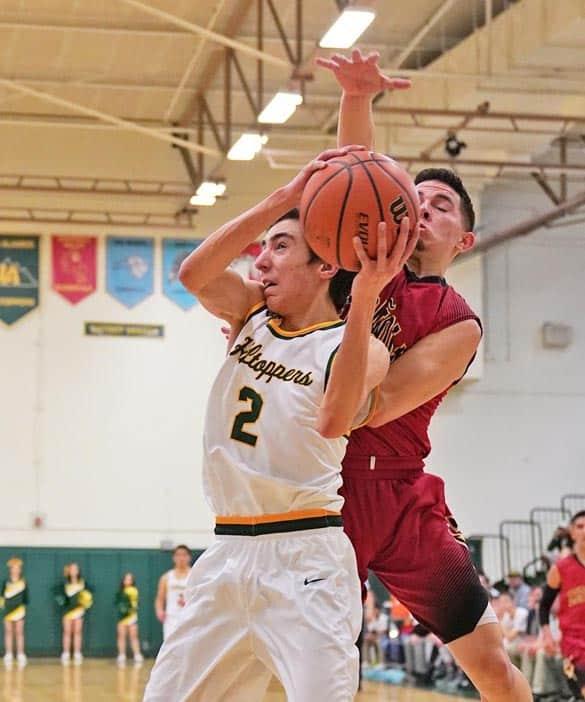 David Owen finds it difficult to get his shot off with a Sundevil player at his back. Owen scored 6 points. Photo by John McHale/ladailypost.com 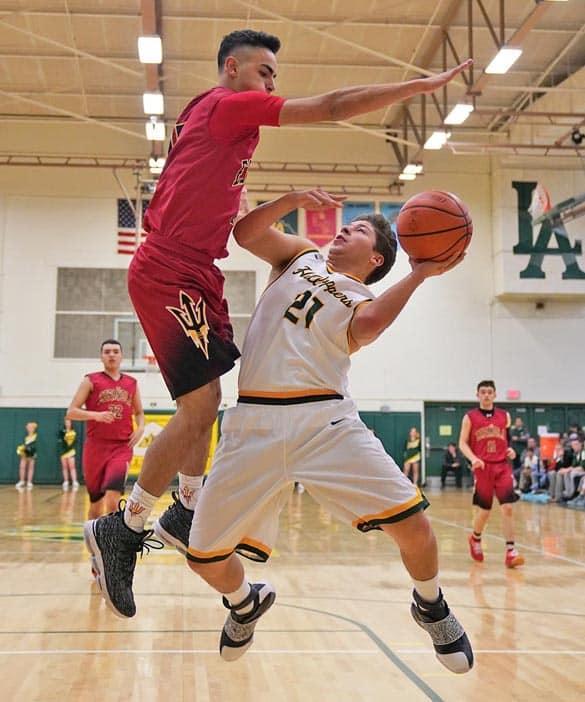 Brandan Duran has his shot attempt blocked but scored 8 points for the game. Photo by John McHale/ladailypost.com 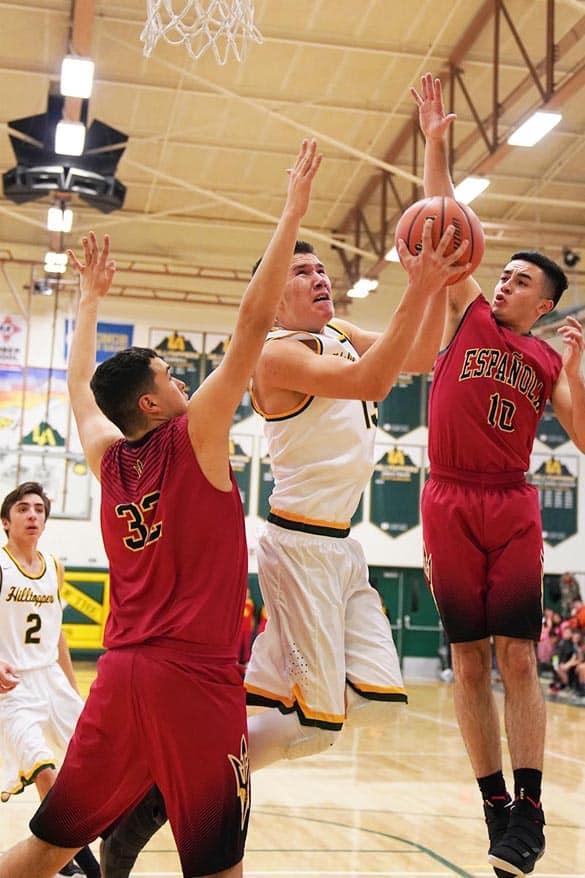 Michael Naranjo is well covered by Azaziah Salazar and JP Sena but managed to score 10 points for the game. Photo by John McHale/ladailypost.com 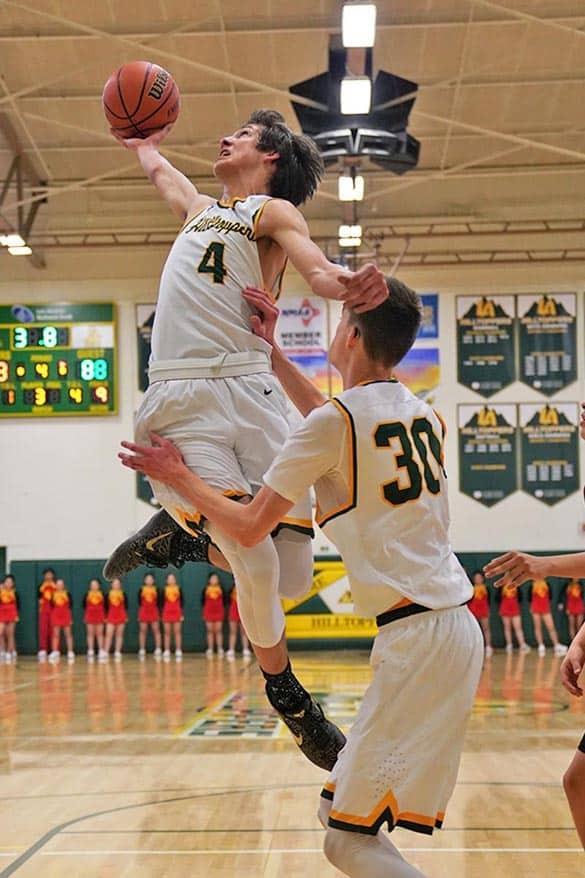 Gavin Campos goes high for a rebound as Gabriel Holesinger backs him up. Campos had 13 points for the game. Photo by John McHale/ladailpost.com