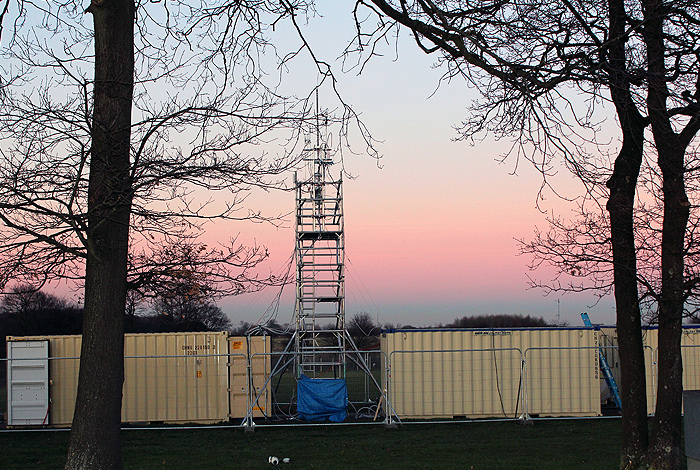 A new study by a science team led by LANL stresses the importance of understanding mixed black and brown carbon in smoke emissions for climate models. The particulates found in urban smoke are especially prone to absorbing sunlight and having a heating effect on the planet. A measurement station, shown here (Detling, UK), is one of several deployed in the UK throughout the study. Photo courtesy Manvendra Dubey/LANL

Cloaking urban areas and wildfire zones, tiny smoke particles suspended in the atmosphere have a sizeable effect on our climate.

But the exact effect of many of these aerosols—such as how much sunlight they absorb, thus warming Earth, or reflecting back to space and so cooling Earth—is very uncertain.

“The new measurements resolve carbon particles that are of several types, each with its own effect on climate,” said project leader Manvendra Dubey of Los Alamos National Laboratory.

“Black carbon, from both city-related biomass combustion, is the most sunlight absorbing. Brown carbon, from sources such as residential wood combustion and forest fires, is the component that is missing in most climate models and can be a significant absorber of sunlight, making it as bad for climate warming as black carbon,” Dubey said.

The new evidence appears in a paper published today by Nature Communications. Notably, the analysis reveals that climate models could be minimizing smoke’s warming effect because the models did not factor in the regionally specific features that determine the light-absorbing carbon particle’s outer coatings and its composition, both of which control how strongly particles absorb sunlight.

Smoke contains black carbon or soot that strongly absorbs sunlight and heats the atmosphere. This soot also can darken snow to accelerate melting and halt its reflective benefits that cool the atmosphere. Worldwide, about 7.5 million tons are emitted annually (mostly from diesel, wood and coal burning) and this soot may be the second most anthropogenic climate warmer (after carbon dioxide), according to a recent expert assessment. However, soot’s climate forcing is also very uncertain.

In a previous paper, this Los Alamos team and colleagues discovered that brown carbon is prevalent in wildfire smoke and they elucidated its warming effects. The new observations of brown carbon downwind of a city show that the brown carbon effects are more widespread than is shown in current climate models and modelers could be undercounting their warming impact.

Smoke is composed largely of organic carbon that is believed to scatter sunlight and exert a cooling effect, therefore balancing some of black carbon’s warming ability. However, this study observed that some of these organics absorb sunlight—warming the atmosphere rather than cooling it—compounded by the team’s new evidence that brown carbon particles have a significant warming impact.

The new analysis (based on the first in-field evidence of its kind) demonstrates that wood burning emits organic species that coat soot particles produced by diesel combustion, creating a lens to focus sunlight and increase warming. The study also shows that the magnification is increased as the particles age and are coated with more airborne chemicals.

“This is a double whammy,” said Dubey. “The transparent organics amplify soot’s warming by lensing, and then we have this very stable brown carbon that causes additional warming. We clearly elucidate the detailed processes that makes the carbon particle much more potent warming agents and provide a framework to capture them in climate models.”

The researchers used state-of-the-art instruments in field studies near London tracking an urban plume as it moved across Europe. The observed lensing effect was successfully reproduced by theoretical calculations and laboratory measurements.

The paper also underscored the need for multiple field studies in more diverse environments with mixed carbon sources, Dubey said. For example, Dubey noted that a similar study published in the journal Science in 2012 saw no enhanced light absorption in soot particles investigated in California in the summer. He said that the key difference is that the sampled region did not have the solid wood combustion that was pervasive in the United Kingdom during wintertime.

“Our results highlight the need for more in situ measurements of soot and brown carbon since there can be a large variability dependent upon emission sources due to different regional mixtures of these absorbing aerosols that contribute to global warming,” said Allison Aiken, one of the Los Alamos researchers on the project.

The results stress the importance of mixed black carbon and smoke emissions in climate. “By controlling both we could not only reduce the risks to human health but also slow climate warming,” Dubey said. “Such controls could give us the precious time to implement the controls of greenhouse gases that will continue to warm our planet in the long term.”

The study was led by Los Alamos and funded by the Department of Energy’s Office of Science Atmospheric System Research (ASR) Program. Aiken, now a Los Alamos staff scientist, had research supported by the Los Alamos Director’s Postdoctoral Fellowship, funded by the Lab’s Directed Research and Development Program.