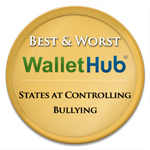 In the next 7 minutes, a child in the U.S. will be bullied. It may be the son or daughter of someone you know. Worse, it may be your own. Meanwhile, only four out of 100 adults will step in to stop it. And only 11 percent of the child’s peers might do the same. The rest — 85 percent — will do nothing.

With Feb. 9 being Stop Bullying Day and more than 160,000 children missing school every day in the U.S. out of fear of being bullied, the leading personal finance social network WalletHub conducted an in-depth analysis of 2015’s Best & Worst States at Controlling Bullying.

To identify the areas of the U.S. where bullying is most pervasive, WalletHub analyzed 42 states and the District of Columbia across nine key metrics, ranging from bullying incident rates online and on school property to the cost of truancy (lower attendance) for schools.

For the full report, visit http://wallethub.com/edu/best-worst-states-at-controlling-bullying/9920/.

Every day in America, more than 160,000 children miss school out of fear of being bullied, according to National Education Association estimates. Bullying takes many forms, ranging from the seemingly innocuous name-calling to the more harmful cyberbullying to severe physical violence. It happens everywhere, at all times to the most vulnerable of kids, especially those who are obese, gay or have a disability.

And besides the physical, emotional and psychological tolls it imposes on victims, bullying produces adverse socioeconomic outcomes. The Association for Psychological Science recently found that those who are bullies, victims or both are more likely to experience poverty, academic failure and job termination in their adulthood. In addition, they are likelier to commit crime and abuse drugs and alcohol.

For schools, the financial burden caused by bullying is not to be ignored, either. According to a National Association of Secondary School Principals report, the average public school can incur more than $2.3 million in lost funding and expenses as a result of suspensions, expulsions, vandalism, alternative placement and lower attendance.