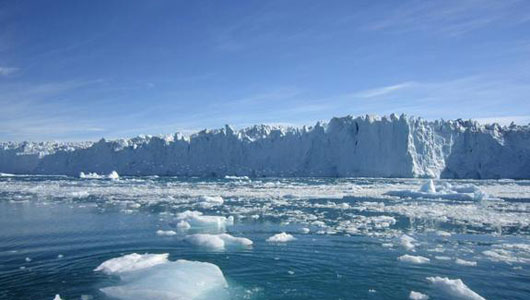 WASHINGTON, D.C. — Surface meltwater draining through cracks in an ice sheet can warm the sheet from the inside, softening the ice and letting it flow faster, a new study finds.

During the last decade, researchers have captured compelling evidence of accelerating ice flow at terminal regions, or “snouts,” of Greenland glaciers as they flow into the ocean along the western coast. Now, the new research shows that the interior regions are also flowing much faster than they were in the winter of 2000-2001, and the study authors propose a reason for the speedup.

“Through satellite observations, we determined that an inland region of the Sermeq Avannarleq Glacier, 40 to 60 miles from the coast, is flowing about 1.5 times faster than it was about a decade ago,” Thomas Phillips, lead author of the new paper and a research associate at the time of the study with the Cooperative Institute for Research in Environmental Sciences (CIRES) at the University of Colorado, Boulder said.

“At first, we couldn’t explain this rapid interior acceleration,” Phillips said. “We knew it wasn’t related to what was going on at the glacier’s terminus. The speedup had to be due to changes within the ice itself.”

To shed light on the observed acceleration, Phillips and his team developed a new model to investigate the effects of meltwater on the ice sheet’s physical properties. The team found that meltwater warms the ice sheet, which then—like a warm stick of butter—softens, deforms, and flows faster.

Previous studies estimated that it would take centuries to millennia for new climates to increase the temperature deep within ice sheets. But when the influence of meltwater is considered, warming can occur within decades and, thus, produce rapid accelerations. The paper has been accepted for publication in the Journal of Geophysical Research: Earth Surface, a journal of the American Geophysical Union.

The researchers were tipped off to this mechanism by the massive amount of meltwater they observed on the ice sheet’s surface during their summer field campaigns, and they wondered if it was affecting the ice sheet. During the last several decades, atmospheric warming above the Greenland Ice Sheet has caused an expanding area of the surface to melt during the summer, creating pools of water that gush down cracks in the ice. The meltwater eventually funnels to the interior and bed of the ice sheet.

As the meltwater drains through the ice, it carries with it heat from the sun.

“The sun melts ice into water at the surface, and that water then flows into the ice sheet carrying a tremendous amount of latent energy,” said William Colgan, a coauthor and CIRES adjunct research associate. “The latent energy then heats the ice.”

The new model shows that this speeds up ice flow in two major ways: One, the retained meltwater warms the bed of the ice sheet and preconditions it to accommodate a basal water layer, making it easier for the ice sheet to slide by lubrication. Two, warmer ice is also softer (less viscous), which makes it flow more readily.

This transformation from stiff to soft only requires a little bit of extra heat from meltwater.

“The model shows that a slight warming of the ice near the ice sheet bed—only a couple of degrees Celsius—is sufficient to explain the widespread acceleration,” Colgan said.

The findings have important ramifications for ice sheets and glaciers everywhere. “It could imply that ice sheets can discharge ice into the ocean far more rapidly than currently estimated,” Phillips said. “It also means that the glaciers are not finished accelerating and may continue to accelerate for a while. As the area experiencing melt expands inland, the acceleration may be observed farther inland.”

The study’s results suggest that to understand future sea-level rise, scientists need to account for a previously overlooked factor—meltwater’s latent energy—and its potential role in making glaciers and ice sheets flow faster into the world’s oceans. In 2007, the Intergovernmental Panel on Climate Change (IPCC) wrote that one of the most significant challenges in predicting sea-level rise was “limited” understanding of the processes controlling ice flow. The IPCC’s next assessment is due out in 2014.

“Traditionally, latent energy has been considered a relatively unimportant factor, but most glaciers are now receiving far more meltwater than they used to and are increasing in temperature faster than previously imagined,” Colgan said. “The chunk of butter known as the Greenland Ice Sheet may be softening a lot faster than we previously thought possible.”