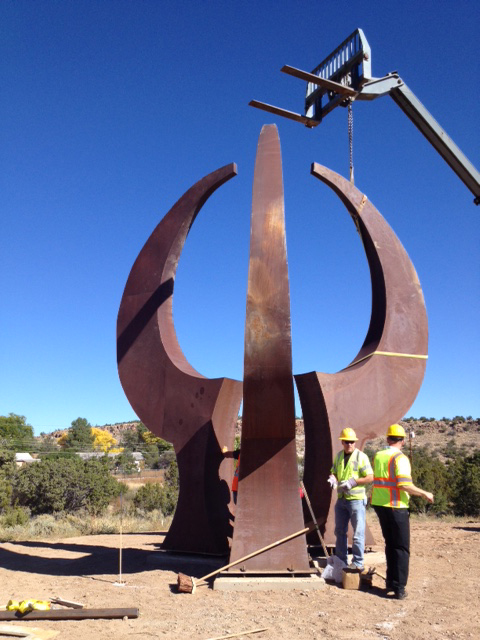 ‘Strange Trio’ being installed Oct. 13 at Overlook Park. A public Re-dedication Ceremony is set for Dec. 2 at the corner of Meadow Lane and Overlook Road in White Rock. Courtesy/LAC 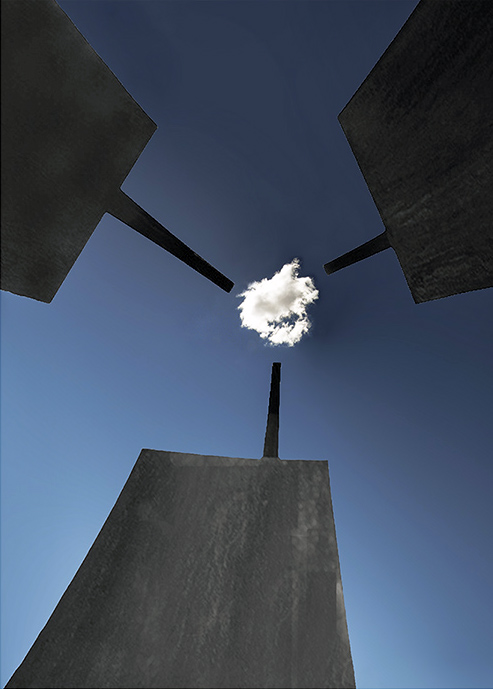 A cloud is captured by ‘Strange Trio’ in this photo taken from an unusual angle when the sculpture was installed at Ashley Pond Park in Los Alamos. Photo by TK Thompson

The public is invited to attend a ribbon-cutting event for “Strange Trio,” the colossal steel sculpture relocated Oct. 13 to the entrance of Overlook Park in White Rock.

The re-dedication ceremony is at 2 p.m. Wednesday, Dec. 2 at the intersection of Meadow Lane and Overlook Road. Speakers include Los Alamos County Council Chair Kristin Henderson, Art in Public Places Board Chair Steve Foltyn and artists Thomas and Scott Hicks. Light refreshments will be provided.

Tommy Hicks, the now 88-year-old owner of Shidoni Foundry and Galleries in Tesuque, came up with the idea for “Strange Trio” in 1977. According a report by the Art in Public Places Board, “the shape and the arrangement of the three elements had no particular meaning to Mr. Hicks but rather were considered to be appealing because of their flow and elegance.”

Shortly thereafter, Hicks commissioned his son, Scott, to make a 20-inch-tall steel sculpture. A small bronze replica followed and then the 20-foot-tall version that resides in Los Alamos County today.

“I was fresh out of high school when he had the concept for that piece,” Scott remembers. “He got me really jazzed up about it, and we were really happy with the outcome.”

The two-ton sculpture was transported to Ashley Pond Park in 1993 as part of the Los Alamos Shows Shidoni sculpture show. In September of that year, the Art in Public Places Board recommended the purchase of “Strange Trio” to the County Council as part of Los Alamos National Laboratory’s 50th anniversary celebration. Council approved, and the statue was purchased for $43,500.

“Strange Trio” was installed in Ashley Pond Park on Trinity Drive until 2008, when strong winds toppled one leg of the sculpture. The work was placed in storage until October 2015, when it was relocated by the Public Works Department to Overlook Park.

“‘Strange Trio’ and Overlook Park are ideal for one another,” Foltyn says, “The sculpture is the largest in the County’s collection and needs a lot of elbow room. The park itself, which is a popular spot for residents and visitors alike, benefits from a powerful landmark at its entrance.”

Tommy and Scott Hicks will see “Strange Trio” in its new home for the first time at the Dec. 2 event. “We’re happy that it’s nearby and that it’s appreciated as a local piece of sculpture by local people,” Scott says. “It’s had a long and exciting life—it’s moved around a lot in Northern New Mexico; it’s fulfilled its destiny.”