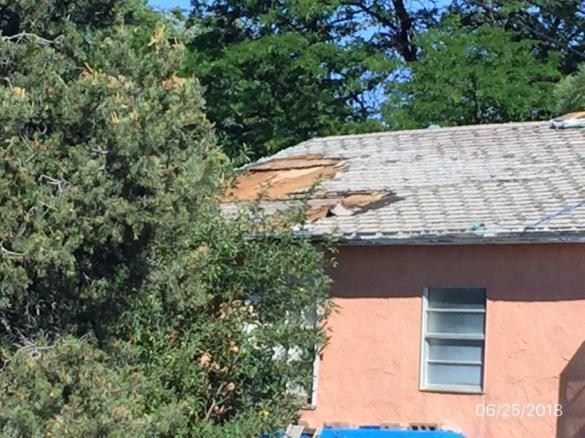 A hole in the roof at the back of a home on Kayenta Street in White Rock, which has been the subject of Municipal Court hearings for more than three years. Courtesy photo

White Rock property owner Jay Stimmel again failed to do as he promised Los Alamos Municipal Judge Alan Kirk Monday when he did not provide the Court with an executed agreement with a construction company to finish replacing the roof on his Kayenta Street house.

Stimmel is charged with having a roof in disrepair in five separate cases related to this residence.

At a hearing June 18, Assistant County Attorney Kevin Powers told the Court that conditions have continued to deteriorate. He said many of the tarps that were placed on the roof have shredded and have been flying into adjacent properties and public property behind Stimmel’s property.

Following a sentencing hearing Monday afternoon, Judge Kirk agreed to give Stimmel until 5 p.m. that afternoon to fax or hand-deliver a copy of the agreement to his office. Judge Kirk had ordered Stimmel to turn in two estimates for finishing the roof by 5 p.m. the previous Friday but Stimmel also failed to meet that timeline, only turning in one estimate at Monday’s hearing.

Powers again expressed his frustration Monday to the Court that after three years of hearings, Stimmel had only produced one estimate and had failed again to communicate with County staff on what steps he had taken to finish the roof. Powers said with the possibility of 30 days in jail, he thought Stimmel would be “a little more serious”. Judge Kirk told Powers he is “working on it, trying to get there”.

Judge Kirk went as far as to have Stimmel place a call the contractor who submitted the one bid to see when it could be executed from the courtroom. Stimmel made arrangements to meet the contractor at the Kayenta property and get the signed paperwork back by 5 p.m. to the court. Los Alamos Chief Building Inspector told the Court that if the contractor turned in the necessary documentation for a building permit Tuesday, he would issue it that day.

At the June 18 hearing, Stimmel admitted that he had not lived in the home since 2011 to 2012. Judge Kirk told him that when he looks at a house with exposed plywood and no shingles it concerns him. He called Stimmel’s neighbors phenomenal and called the risk Stimmel is putting his neighbors’ properties under unacceptable. Judge Kirk told Stimmel he doesn’t know where someone gets off thinking they can penalize their neighbors and continue to provide the Court with excuse after excuse without consequences. He said he has bent over backwards to get the issue resolved for three years.

Powers showed the Court photos of the back side of the Kayenta property to demonstrate the seriousness of the situation. He said it is clear that there is a hole in the roof and that he would be requesting an administrative order to go into the property. At the previous hearing Powers told the Court that due to the extensive damage to the roof there might be mold, a fire hazard or rodent harborage involved, which might be jeopardizing the life and safety of even Stimmel.

Judge Kirk said if he put Stimmel in jail right then he couldn’t get the roof project done.

“I’m concerned about relinquishing my authority as far as sentencing. Right now, we have a period of time where we can look for compliance before I issue a sentence,” he said, adding that his goal is to “get compliance”.

Judge Kirk asked Stimmel if he understood the Court is in the sentencing phase.

“I’m saying let’s get this done before I have to make a decision again because I might make one that’s a lot more severe than Mr. Powers is recommending,” he said. “If it was me I’d be taking a week off work to get the situation taken care of. If I was sitting in front of a judge hearing 30 days in jail as a possible sentence, I’d be making sure this was getting done.”

Judge Kirk continued the sentencing hearing to 1 p.m., Monday hoping that the issue would be solved and it is not known what action if any he will take at that time. As of Tuesday afternoon, Municipal Court staff said they still have not received the executed agreement and County building officials indicated they had not received a building permit application from Stimmel’s contractor.