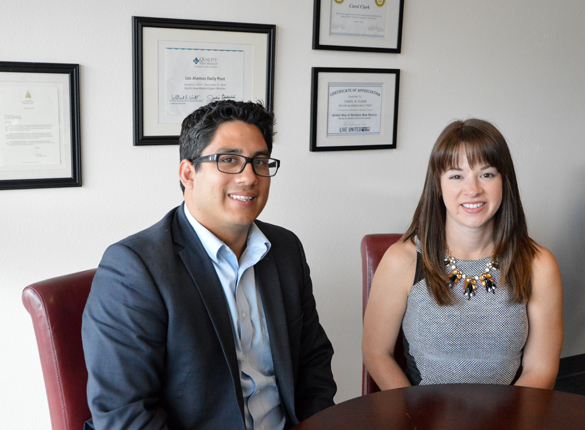 ACI President and CEO Jason Espinoza and ACI Director of Public Policy Bailey N. Griffith stopped by the Los Alamos Daily Post last month during their statewide FOCUS Tour. Photo by Carol A. Clark/ladailypost.com
By JASON ESPINOZA, President and CEO
New Mexico Association of Commerce and Industry
In early October, the New Mexico Association of Commerce and Industry wrapped up its statewide FOCUS Tour. The FOCUS Tour is about connecting with the people and entities we represent, regardless of where they’re based. To that end, we promise never to be guilty of having our Albuquerque blinders on or to exclusively represent big business.
When a statewide organization like ACI has its headquarters in Albuquerque, it is not uncommon for outlying communities around the state to give us a doubtful side-eye about our “statewide” outreach.
New Mexico is the fifth-largest state by area, and about 43 percent of the state’s population lives in the Albuquerque metro, so I can see both sides. But ACI bills itself as the “Voice of New Mexico Business,” and we know the voice is clearer, and we know it carries farther, when we’ve breathed the air and considered the concerns in every part of the state before we speak to legislators.
The Legislature’s special session shortened the FOCUS Tour’s itinerary, but after three consecutive weeks, ACI visited 15 cities across the state. We are particularly proud that we spoke to double the overall attendance from last year’s tour, which covered as many cities. This is thanks in large part to the community chambers of commerce that coordinate with us on nearly all the community stops. Let me also take the liberty to thank New Mexico Mutual, New Mexico Health Connections and AAA New Mexico for sponsoring our trek around the state.
The information gathered during the FOCUS Tour is tremendously valuable to our work, because the tour leads into our fall policy committee meetings, where our member representatives deliberate on the priorities of our policy work for the upcoming legislative session. While we’re speaking with community business leaders on the tour, we’re presenting our interim policy agenda and gathering feedback to ensure we are on track. If and when we discover additional pressing issues during the tour, we take them back to our dozen committees. This is our new routine for preparing for the regular legislative session.
We surveyed FOCUS Tour participants regarding the top policy priority from each of our dozen policy committees. Those surveyed told us the following issues, in no particular order, are more relevant to them right now: evaluating the state tax code; increasing the availability of broadband; developing energy infrastructure; and easing the burden of varying minimum employment-benefit mandates across local jurisdictions, like counties and municipalities.
And with that feedback, we are already moving some reforms forward for consideration. Two policy priorities on the list – broadband and employment-benefit uniformity – received the endorsement of the Jobs Council, one of the Legislature’s bipartisan interim committees, at its Oct. 24 meeting.
Local governments, like cities and counties, are increasingly adopting laws that require employers to provide minimum levels of such benefits as paid leave and “secure scheduling.” We believe New Mexico employers – especially small businesses – should not be forced to deal with a patchwork of employment-related mandates when they, ideally, expand to other communities in the state. If there’s to be a benefit mandate, we would rather it come solely from the Legislature, because we believe that’s the only  path toward stabilizing the business environment and fostering expansion of our New Mexico-grown businesses.
Our forthcoming broadband efforts seek to eliminate barriers to broadband network deployment. Government policies should foster private-sector investment and innovation to deliver world-class, high-speed internet service that allows New Mexico to better compete for jobs, improve healthcare access and maximize educational opportunities in this century’s information-based economy.
Other policy issues on the list are being deliberated by their respective ACI policy committees and will be communicated to you as we roll them out.
ACI’s office might be in Albuquerque, but we are absolutely committed to representing businesses in every community, in every industry and of every size in New Mexico. To take part in these policy discussions, all a business needs to do is register as an ACI member. And thanks to technology, we can involve businesses all over the state in our policy committee meetings.  Since last year’s tour, we have seen committee participation more than double in many cases, thanks to member representatives outside Albuquerque getting involved.
This was my second FOCUS Tour in as many years since becoming ACI’s CEO, and if canvassing the state in two weeks to engage community business leaders has taught me anything, it’s that the dialogue is both invigorating and inspirational. Every morning, we roll up our sleeves and get to work just as our member businesses do. Our work aims to make their work easier, and we’re hard at it.
Menu
LOS ALAMOS