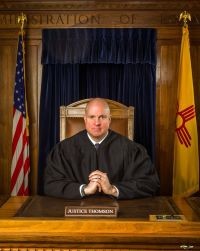 SANTA FE — Livestock theft is to be prosecuted for each occurrence of theft rather than a separate charge for each animal allegedly stolen, the New Mexico Supreme Court ruled in an opinion released Monday.

In a unanimous opinion, the state’s highest court provided the legal reasoning for a decision it announced from the bench earlier this year in a consolidated appeal involving three people awaiting trial for allegedly stealing cattle in Otero County. The Court heard oral arguments in the case in Las Cruces as part of a civics education program for students.

Livestock larceny is a third-degree felony, punishable by three years in prison and a fine up to $5,000.

To reach its decision, the Court analyzed the wording of the statute, the legislative purpose of the law, the severity and length of punishments provided for under the current statute, and reviewed the legislative history of laws against livestock theft since New Mexico’s territorial days.

The justices rejected arguments by the state that defendants should face one charge for each head of livestock stolen. The law “contemplates prosecution for the theft of anywhere from a single animal to an entire herd,” the Court reasoned.

“Specifically, the word livestock, which is neither singular nor plural, suggests that the Legislature did not contemplate a unit of prosecution based on the count or number of animals stolen in a single episode of theft,” the Court wrote. “The language of the livestock larceny statute supports this reading. The statute punishes the larceny of livestock as ‘a third degree felony regardless of its value.’ Section 30-16-1(G) (emphasis added).This contrasts with the portion of the larceny statute addressing the theft of generic property, which provides for ‘gradations of punishment based on the monetary value of the property.’’’

Prosecutors initially charged each of the defendants based on the number of cattle they allegedly stole but a district court in Otero County granted pretrial motions by the defendants to merge the charges. The Court of Appeals upheld the district court’s decision and the state appealed to the Supreme Court.

As a result of the district court’s rulings, Gerardo Torres, faces two counts of livestock larceny – one count for each episode of theft on different days from the same location and same owner in 2017. He originally was charged with 18 counts for allegedly stealing 18 cattle.

Kendale Hendrix and Skeeter Chadwick face one count each for a theft that occurred on a single day in 2018. They initially were each charged with 25 counts of larceny of livestock for allegedly stealing 25 unbranded calves from an Otero County ranch. The alleged theft in their cases is separate and unrelated to that involving Torres.

The Supreme Court ordered the cases back to the district court and stated in today’s opinion that it would be up to a jury to determine based on factual issues whether the two offenses against Torres “were distinct.”

The Court’s visit to Las Cruces was part of its Rule of Law Program, in which students have the opportunity to watch oral arguments in a case and later ask questions of the attorneys and members of the Court.

“The Supreme Court is committed to its Rule of Law program that has allowed New Mexico students to see firsthand how the judiciary resolves disputes in our democracy by interpreting the law and applying it to the facts of a case,” Justice Thomson said in a statement Monday.