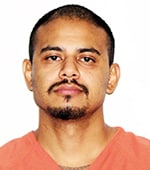 Matias Loza
NMSC News:
SANTA FE ― A man convicted of racketeering can be separately prosecuted for murder and other offenses that served as a basis for the racketeering conviction in southern New Mexico, the state Supreme Court has ruled.
In a unanimous decision, the Supreme Court said federal and state constitutional protections against double jeopardy do not prohibit the prosecution of Matias Loza for first-degree murder, arson and bribery of a police officer. Loza was indicted on those and other charges for the killing of Richard Valdez near Alamogordo in November 2011. The victim’s body was discovered in a burned-out automobile and sheriff’s deputies found Loza hiding nearby.
Loza was a member of a drug trafficking organization known as the AZ Boys, according to authorities. He was convicted in 2014 of racketeering and conspiracy to commit racketeering for a pattern of unlawful activities carried out by a criminal enterprise in 2007-2012. He was not convicted of murder, arson and bribery although those alleged crimes were among the gang’s racketeering activities.
The constitutional prohibition against double jeopardy protects defendants from being punished for the same offense or from being retried for the same offense after being acquitted or convicted of the crime.
The ruling by the state’s highest court upheld a district judge’s decision in 2015 to deny Loza’s request to dismiss murder, arson and other charges. Trial court proceedings in his case have been on hold during his appeal of the judge’s decision.
The state’s highest court said double jeopardy challenges are common in racketeering cases and that federal courts have uniformly concluded that defendants can be convicted separately for engaging in racketeering and for committing the crimes – known as predicate offenses – that constitute racketeering.
The Supreme Court concluded that the New Mexico Legislature intended for racketeering to be a separate crime under state law from the predicate offenses that are part of racketeering.
“We also point out that the prosecutions for racketeering in the earlier case and the charges in this case are aimed at deterring different kinds of conduct—the overall cumulative activity of racketeering, on the one hand, and murder, arson and bribery, on the other,” Justice Barbara J. Vigil wrote in the court’s opinion.
“In other words, although there may be significant overlap in the evidence presented against Defendant in both trials, Defendant is not being prosecuted in the murder case for the same conduct he was prosecuted for in the racketeering case,” the Court said. “This fact lends further support to our conclusion that double jeopardy protections do not present a bar to Defendant’s prosecution for murder, arson, and bribery in this case.”
Loza was sentenced to 12 years in prison for the 2014 racketeering and conspiracy convictions.
Menu
LOS ALAMOS