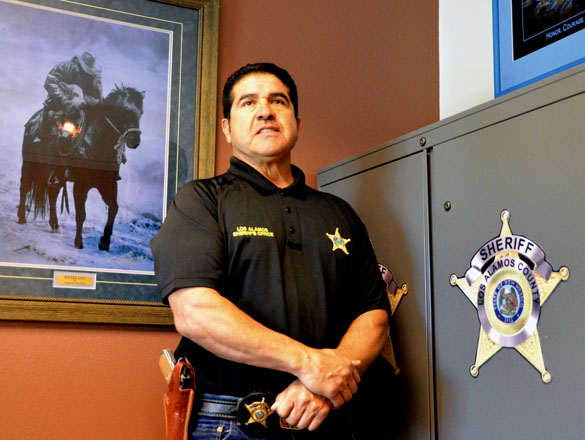 Support is mounting for Sheriff Marco Lucero in his battle to keep the Office of Sheriff intact in Los Alamos County.

This comes following action over the last few months by the Los Alamos County Council to transfer the bulk of duties from the Office of Sheriff over to the police department with the exception of the sex offender registry. The Council has subsequently voted to place a referendum on the Nov. 8 General Election ballot to abolish the Office of the Sheriff entirely.

Executive Director Jack Jones of the New Mexico Sheriffs’ Association addressed the issue during a telephone interview Monday at the local sheriff’s office.

“They are destroying the Republic as we know it,” Jones said. “A sheriff is elected by the people in each of the 33 counties in New Mexico and is the ultimate protector of the people. Every sheriff takes an oath of office to serve the people and if we take away the opportunity for people to vote to select the highest officer in the county then we’re doing them a disservice.”

Prior to being appointed executive director of the NMSA in August, Jones ran the New Mexico Law Enforcement Academy for police officers. He also served as a state police officer for several years.

Lucero explained during the interview with Jones that he believes the Council took action against him after he questioned a county official about possible misuse of county property.

“A concerned citizen spoke to me about misappropriation of county property by a county official and two days later after I questioned that official all this action against me began,” Lucero said.

He declined to elaborate about the alleged misappropriation of property but said that this is a clear example of why the Sheriff’s Office is important to the community.

“My disappointment in this Council is that they don’t recognize the fact that the people re-elected me after my first four-year term because they like a working Sheriff’s Office and they like the direction the office is heading,” he said.

Lucero served as a Santa Fe County deputy sheriff for 22 years before retiring and running for Los Alamos County Sheriff. He is in the middle of his second four-year term.

“My intent has always been to give back to this community with my training and to keep the children safe,” Lucero said.

Another recent show of support has come from the Western States Sheriffs’ Association represented by sheriffs in Arizona, California, Colorado, Idaho, Montana, Nevada, New Mexico, North Dakota, Oklahoma, Oregon, South Dakota, Texas, Utah, Washington and Wyoming. The organization has issued a position paper on “The Importance and Value of an Elected Sheriff”.

The paper states that, “It is critical to our way of life that the people maintain the right to choose who their Chief Law Enforcement Officer should be. The Western States Sheriffs’ Association believes that the office of Sheriff is unique and must have autonomy with accountability to the people of the County. A publicly elected Sheriff ensures that the Sheriff will be held accountable by the people to the values of the counties and communities they serve.”

The Los Alamos Sheriff’s Office is hosting a “Sheriff’s Public Safety Day”, 10 a.m. to 2 p.m. Saturday, at Ashley Pond for the entire community. Lucero, Jones and sheriffs from around the state are scheduled to attend. Free hot dogs and hamburgers will be served and there will be a variety of fun as well as safety oriented activities such as fingerprint cards for children and programs on stranger danger and awareness tips.