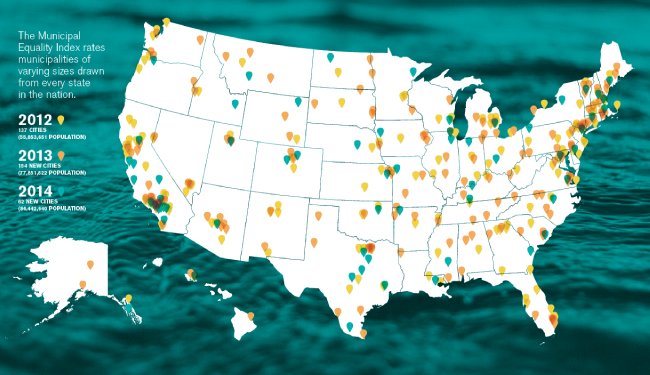 The 2014 Municipal Equality Index (MEI), the only nationwide rating system of LGBT inclusion in municipal law and policy, shows that cities across the country, including New Mexico, continue to take the lead in supporting LGBT people and workers, even when states and the federal government have not.

The average score for cities in New Mexico is 60 out of 100 points, which falls above the national average of 59:

“From Mississippi to Idaho, mid-size cities and small towns have become the  single greatest engine of progress for LGBT equality–changing countless lives for the better,” HRC President Chad Griffin said. “In just three years, the number of municipalities earning top marks for their treatment of LGBT citizens has more than tripled. Simply put, in this country there is an ongoing race to the top to treat all people, including LGBT people, fairly under the law, and it’s time our state and federal laws caught up.”

“In many municipalities, local leaders are taking important steps to provide LGBT people with the protections and security not available at the state or federal level. And because of this leadership, many cities and counties are emerging as welcoming communities where LGBT people are treated with the dignity and respect they’ve always deserved,” said Rebecca Issacs, executive director of Equality Federation. “Municipal victories are fueling the movement for equality in states across this nation.  The Municipal Equality Index is a terrific tool to help spur those victories along and celebrate the cities who have worked so hard to get us to this point.”

Key findings contained in the MEI, issued in partnership with the Equality Federation, provide a revealing snapshot of LGBT equality in 353 municipalities of varying sizes, and from every state in the nation. The cities researched for the 2014 MEI include the 50 state capitals, the 200 most populous cities in the country, the four largest cities in every state, the city home to each state’s largest public university, and an equal mix of 75 of the nation’s large, mid-size and small municipalities with the highest proportion of same-sex couples.

Other findings contained in the 2014 MEI:

The MEI rates cities based on 47 criteria falling under six broad categories:

The full report, including detailed scorecards for every city, as well as a searchable database, is available online at www.hrc.org/mei.

The Human Rights Campaign Foundation is the educational arm of America’s largest civil rights organization working to achieve lesbian, gay, bisexual and transgender equality. HRC envisions a world where LGBT people are embraced as full members of society at home, at work and in every community.