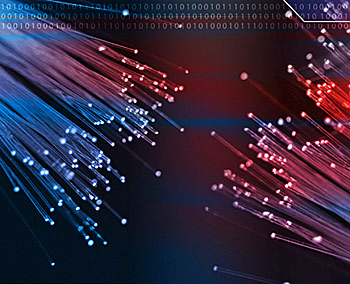 Communicating with light may soon get a lot easier, hints recent research* from the National Institute of Standards and Technology (NIST) and the University of Maryland’s Joint Quantum Institute (JQI), where scientists have potentially found a way to overcome a longstanding barrier to cleaner signals.

The findings, which demonstrate for the first time an error rate far below the “standard quantum limit” for a wide range of light levels, could increase the efficiency of fiber-optic systems by reducing both the power needed to send a signal and the number of errors the receiver makes.

Light waves traveling through a fiber-optic cable often carry digital information encoded as differences in phase between one wave and another.

The crests of two waves that are “in phase” pass a point at the same time, while if the two waves are 180 degrees out of phase, one crest passes while the other’s trough does.

Receivers can be designed to detect more than just two phase angles—0, 90, 180 and 270 degrees, for example—and the more phases they can detect, the more information can be packed into a signal, increasing the rate of data transmission.

However, a constant problem is that phase states slightly overlap one another, meaning that there is a chance a state with 180-degree phase will be mistaken for a 0, 90 or 270-degree phase state. To minimize these errors, engineers must use more optical signal power—which amps up the cost as well.

A potential solution would be an improved receiver that does a better job distinguishing among the different phase states. But designers have struggled for decades to get past a barrier they call the standard quantum limit, which is the best performance an ideal conventional receiver could ever attain.

The research team, though, found a clever way to get past the standard quantum limit using off-the-shelf technology to construct a receiver in an innovative way. Their solution is to make several measurements instead of a single one, and set them up so that each measures a portion of the input light’s phase state successively.

“With a receiver implementing only a few adaptive measurements, we’ve managed to achieve error rates four times lower than the standard quantum limit,” says Francisco Elohim Becerra, a NIST/JQI postdoctoral fellow who is acknowledged by his co-authors as having done the brunt of the work and originated the design.

While the innovation may not make its way into a fiber-optic system near you for some time, Becerra’s coauthor Alan Migdall says better phase measurement could lead to more efficient technologies that harness quantum effects, as well as improved data encryption systems.