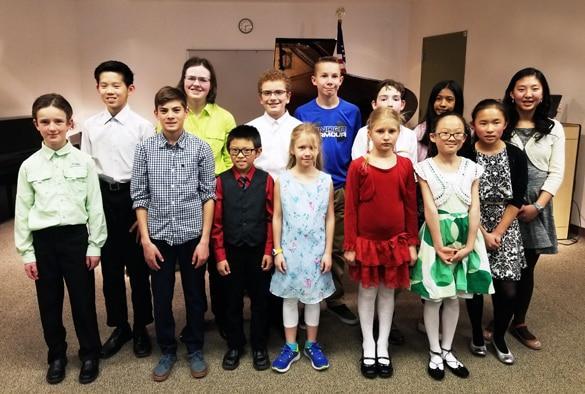 The UNM-LA Campus continues its ongoing mission of Community Outreach and Service through their sponsorship of the Sunday Musicale Recital Series, presented at 2 p.m. this Sunday, April 22, by students of teachers in the Los Alamos Music Teachers Association (LAMTA).

Frequently in attendance at the performances herself, Dr. Cynthia Rooney, CEO of the UNM-LA Campus, will welcome 19 outstanding young Los Alamos pianists between the ages of 4 and 14 to the campus. The recital is FREE and open to the public, held in the campus Student Services Building. Students will be presenting a program that is a wide mixture of musical styles spanning all musical periods from Baroque, Classic, Romantic, and the Modern era.

Making his debut in a public recital is young Apollo Chen, just 4 years old, the son of Cong Pam and Yu Chen. A student of Ms. Ellen Scudder, Apollo recently demonstrated his prowess at the piano through his First Place standing at the recent NM State Performance Evaluation Program. He is performing two short works of Janet Vogt.

Several of Sunday’s performers have been recent prize winners in piano competitions held throughout New Mexico this past year. Most notably, Julia Chen, age 14, was the NM State First Prize Winner in Level III of the statewide Honors Competition, held in Albuquerque last November. On Sunday, she is performing the virtuosic first movement of Beethoven’s Sonata No.16, Op. 31, No. 1. Her parents are Haidan Yan and Houtong Chen. Her teacher, Dr. Madeline Williamson, notes that this is a new work in her developing repertoire, which is why the LAMTA Sunday Musicale Series is so invaluable: It provides much-needed performance opportunities for all levels of serious piano students, from the earliest ages throughout their high school years.

The LAMTA’s Sunday Musicales are regular public presentations in both fall and spring terms for the public’s enjoyment and to highlight appreciation of the city’s musically talented youth. Students of LAMTA members Ms. Janna Warren and Dr. Patricia Wood will also be performing.

LAMTA is the local affiliate of the State (PMTNM) and National (MTNA) professional music organizations for independent music teachers and college music faculty. All performers in Musicales are students of teachers who are professional members of all three organizations. Although the program is Free to the public, all donations are gladly accepted at the Reception which follows in the Lobby. All donations go to support ongoing enrichment activities which are conducted on behalf of students by LAMTA. LAMTA is a non-profit 501-(c-3) organization with the mission of furthering the art of music teaching and programs that encourage and support music study and appreciation for students and their community. For any further information about the recital, call 505.929.4693 with a message.

Sunday’s concert is easily wheelchair accessible by parking in the parking lot behind the Student Services. The concert will last approximately one hour.