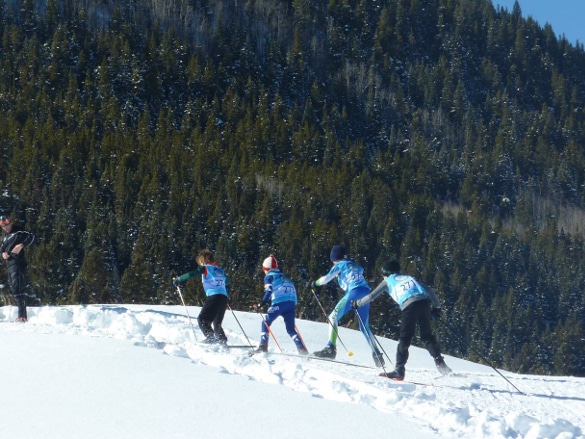 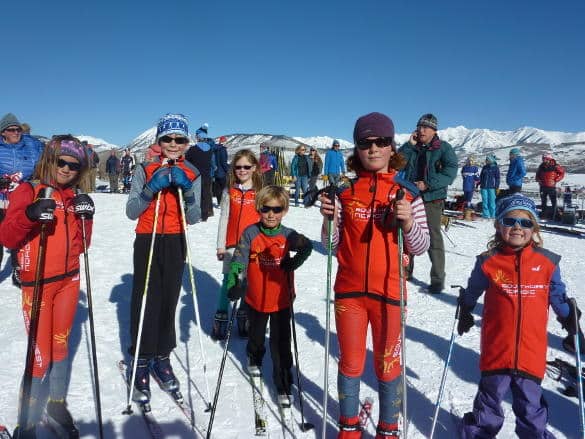 From left, Los Alamos skiers Mila Moseley, Axel Niklasson, Liv Niklasson, Quanah Moseley, Madalyn Baily and Samantha Baily. Courtesy/Southwest Nordic Ski Club
SPORTS News:
What a difference a year and more experience makes. That was evident for the kids on the Southwest Nordic Ski Club (SWNSC) team who traveled to the Rocky Mountain Nordic (RMN) Junior National Qualifier (JNQ), Jan. 13-15 in Crested Butte, Colo.
The kids from Los Alamos definitely had their work cut out for them being up against all of the big teams from Colorado, such as the Steamboat Springs Winter Sports Club, Ski and Snowboard Club Vail, Aspen Valley Nordic, Summit County Nordic Club, Boulder Nordic Club, Durango Nordic Club, Winter Park Nordic Club, Crested Butte Nordic and Gunnison Nordic Clubs.
Last season was the local club’s first taste of the highest level of competition for juniors in the RMN JNQ series, which is part of the United States Ski and Snowboard Association (USSA) sanctioned regional races for kids looking to advance to the national and international levels. It starts with racing at the RMN (Rocky Mountain region) qualifiers, then based on results there, up to the national level.
Ultimately, the road would lead to competition on a world and Olympic level, but only with a lot of hard work and some luck. Kids have to start quite young, as is the case with many technique-based sports.
There are categories for kids under 8 yrs old (U-8) all the way to “kids” under 20 yrs old (U-20). Beyond that, athletes are considered “senior” level. The SWNSC has a young, development team with all athletes under 12 (U-12), as young as 5 years old.
Race distances and difficulties vary for each age group. Courses for the older kids have bigger, steeper hills to race up (and down) with more distance added in. The younger kids still race up some big hills, but not so big that their little legs bog down, and courses are not so long that they become overly exhausted.
Last season, the SWNSC dipped their toes in the JNQ level races for the first time at races hosted by the Durango Nordic Club, then later in the season at the U-14 Nordic Festival in Crested Butte. While it was a tough lesson about competition, it provided motivation to keep trying. Over the summer and fall, the SWNSC kids group trained by hiking, running, biking, swimming, and practicing agility and strength exercises. It was hard work, but also fun.
At the recent event in Crested Butte, hundreds of kids from all of the big clubs in Colorado were there, competing for points to be chosen to the RMN national championship team. The competition was fierce. The first day was a “Classic Sprint” – a set of short races conducted in the original “classical” style of cross-country skiing. Competitors races a short qualifier, and based on the qualifier, were seeded for the “heats.” Younger categories raced a short qualifier and then a seeded “final.”
In his first USSA JNQ races, Axel Niklasson placed 23rd in a large field of Men U-12. Also in their first USSA JNQ race, Madalyn Baily and Liv Niklasson placed 7th and 8th respectively in the Female U-10 race.
In that same race, SWNSC’s Mila Moseley won (Female U-10) in a tough field. This was Mila’s 3rd USSA JNQ race, having raced in the two races last season, gaining valuable experience.
For the youngest U-8 categories, SWNSC had 6 yr. old Samantha Baily in the FU8 race, and 5-year-old Quanah Moseley in the MU8. Samantha took 4th and Quanah took 1st.
The second day of competition was conducted in the “freestyle” technique, which allows cross country skiers to skate (like rollerblading on skis), which is not allowed in classic-style cross-country skiing. Most kids like the skate technique most, as it is faster and looks more “flashy” than their grandparents’ style
of cross-country skiing.
In the MU12 skate race, Axel Niklasson raced to 22nd out of his large and competitive field. Mila Moseley again raced to 1st in a very exciting finish against Durango Nordic’s Betty Holcomb in the FU10 field.
Madalyn Baily, who has more experience as a classical style skier, raced her first-ever skate race, finishing strongly in 7th. For the second day, Samantha Baily raced to 4th in the FU8 group, and Quanah Moseley outlasted the little guys in the MU8 for 1st. 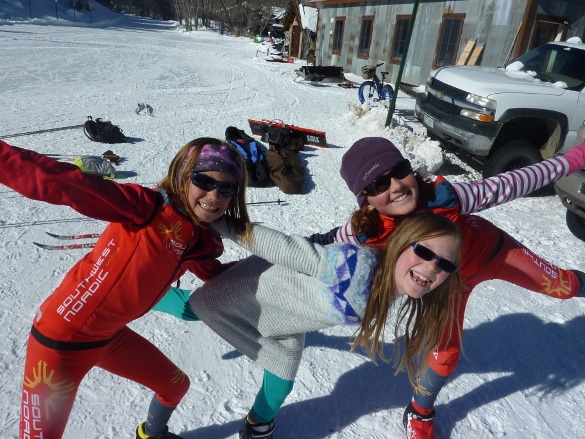