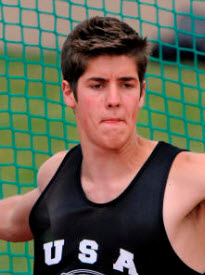 Morris is the son of Los Alamos athletes Mark Morris (88) and Angie Morris (89). He attends Albuquerque Academy in Albuquerque and is a rising junior. He won New Mexico high school state track and field championships in 5A in discus, javelin and shot put as well as the discus competition in discus for the Great Southwest Track and Field event.

The 6-foot-4, 180-pound sophomore throws specialist and decathlete captured three individual state championships this spring and led the Chargers to a ninth-place finish as a team at the Class 5A state meet. Morris took first in the discus with a throw of 154 feet, two inches and the shot put (46 feet-1.25). He earned his third title by launching the javelin (170-1). A 2015 First Team All-State selection, he won the shot put in the decathlon competition at the prestigious Great Southwest Classic with a throw of 43-3.25.

Morris has maintained a 3.29 GPA in the classroom. An accomplished guitarist, he has volunteered locally on behalf of Albuquerque’s Animal Humane Adoption Center, the Roadrunner Food Bank and the Special Olympics.

“Jackson Morris is just scratching the surface in his potential as a track and field athlete,” said Albuquerque Academy head coach Adam Kedge. “It was mid-season that he started to throw the javelin and progressed into a state champion. He has both the desire and the skills to progress into an outstanding decathlete.”

The Gatorade Player of the Year program annually recognizes one winner in the District of Columbia and each of the 50 states that sanction high school football, girls volleyball, boys and girls cross country, boys and girls basketball, boys and girls soccer, baseball, softball, and boys and girls track & field, and awards one National Player of the Year in each sport. The selection process is administered by the Gatorade high school sports leadership team in partnership with USA TODAY High School Sports, which work with top sport-specific experts and a media advisory board of accomplished, veteran prep sports journalists to determine the state winners in each sport.