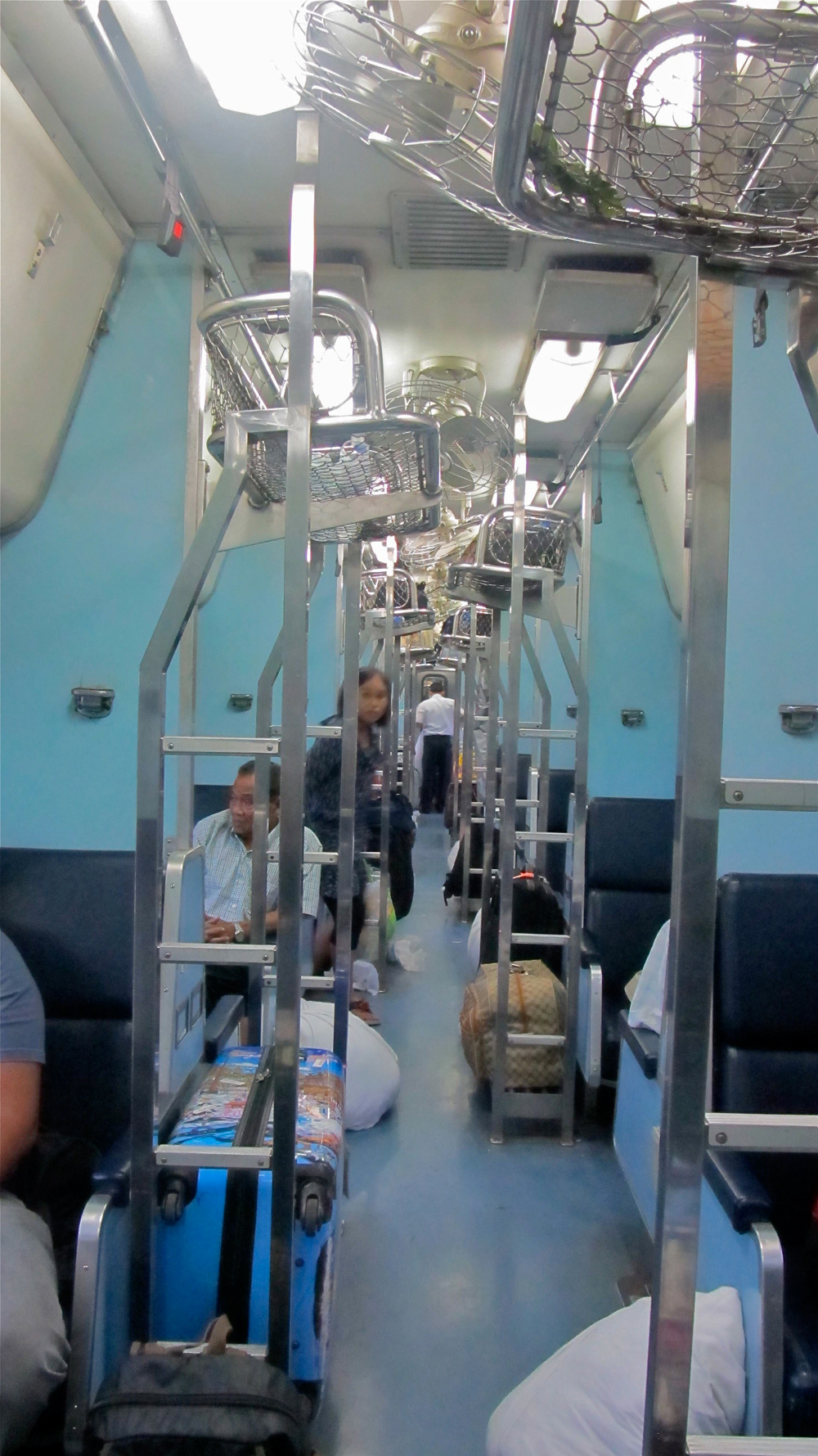 Beds in stowed position on a Thai train. Photo by Sherry Hardage 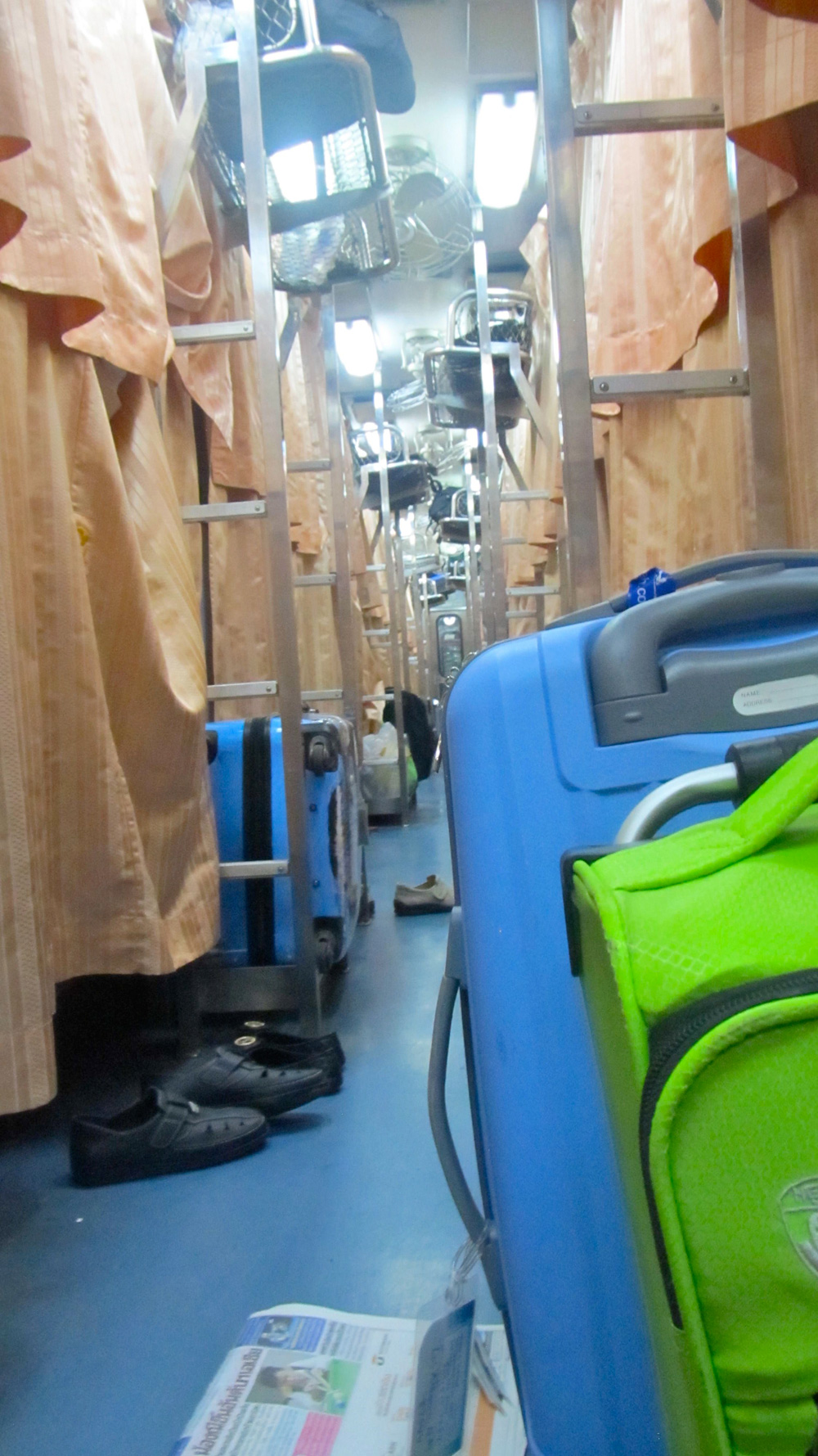 Beds come down for the night. Photo by Sherry Hardage

Train travel ─ is there anything more romantic? Well, Paris maybe. Better yet, train travel to and from Paris!

There is a website, The Man in Seat 61 created by a fellow whose love affair with trains goes back to his childhood. His site features descriptions, schedules, fares, and even videos of just about every passenger train in the world.

I read about the trains in Thailand and wanted to ride the one from Bangkok to Chiang Mai. A daylong trip would reveal how the green countryside changes from sea-level plains into Chiang Mai’s mountains. A video on the website showed the porter changing the seats on a train into beds for overnight travel. It made me want to go on a sleeper!

Unfortunately, the tracks were under repair between Chiang Mai and Bangkok, and much of the trip would have been by bus. My friend and I chose to fly instead.

After two weeks on the island of Koh Tao, I finally got my romantic train trip. We took a ferry to Champhon and then a bus to the train station far inland. With a couple hours to kill, we wandered over to a little bar with an American theme – carved Indian heads on the wall, state flags, Disney cartoon characters, and jazz on the speakers.

A woman from Virginia, who had been teaching in Thailand for a few years, visited with us. When it came time to return to the station she volunteered her Thai boyfriend to help with our luggage. He had spent 10 years as a porter and knew exactly where we needed to wait on the long dark platform so we could load quickly into our sleeper car. He even came back later when the train finally arrived to help us get settled. He refused a tip, and hinted instead that he’d like a kiss from each of us. Knowing he might try to cop a feel, we both refused.

Unbeknownst to me, that would be the full extent of romance on the trip.

I’d read that second-class sleepers had air conditioning and comfortable beds. The cars were purchased years ago from Japan when that country upgraded to bullet trains. Judging from the light turquoise color scheme and worn condition of the steel car, I would guess they’d been manufactured in the 1960s. The system for converting to beds was ingenious. It involved rolled mattresses and pillows stored in the upper bunk, which was then latched onto the ceiling.

The beds were already made up, and people were in their curtained “bedrooms” when we arrived. The ladders to get to the top bunks formed the metal ends of the luggage racks.

The train pulled out and the screeching began. The car rocked back and forth. I was certain it would capsize on the curves. Occasionally there were loud clangs, as if we’d run over a child’s wagon and it was breaking up under the wheels.

Every 30 minutes, or so, the train slowed to a halt at some tiny station so one or two people could board. I attempted to look out the window for a glimpse at the night scenery, but the tracks were bordered by thick jungle. Except for the little towns, it was pitch black outside. The night train was probably the best idea, since there wouldn’t have been much to look at in the daytime either and  we saved money on a hotel room. It seemed like an exceptional deal at less than 1,000 Baht ($32.)

It might have been a great deal, too, if it had been possible to sleep on the swaying, lurching, screeching train. I never recalled reading about that on the website.

Several times the train stopped on a siding and sat for a long while, so we did get some sleep. The beds were comfortable enough with long privacy curtains. The car’s restroom had Asian squat toilets, literally a hole in the floor with the ground beneath the train whizzing past. All the while the train rumbled and lurched from side to side. That was an experience!

Promptly at 5:30 a.m. we were awakened and asked to vacate our beds as the efficient porter stripped off the bedding and whipped our beds back into seats. When the train reached the outskirts of Bangkok it slowed down and stopped several times at little stations before reaching the huge hub, Hualamphong, two hours late.

We taxied to our hotel and checked in early at a premium price. After a filling breakfast we crashed, slept till noon in soft quiet beds that never moved an inch. Ahhhh.