Solo Traveler: What The French Do Best 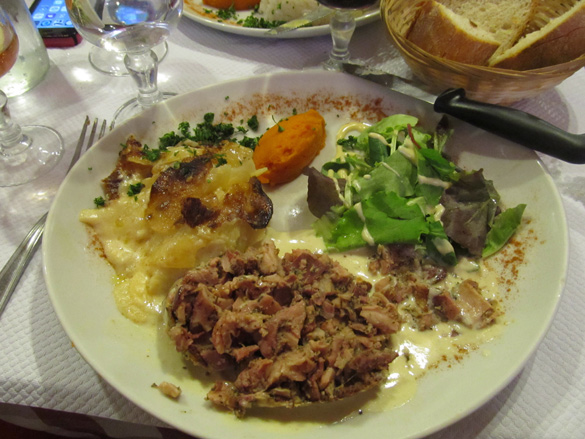 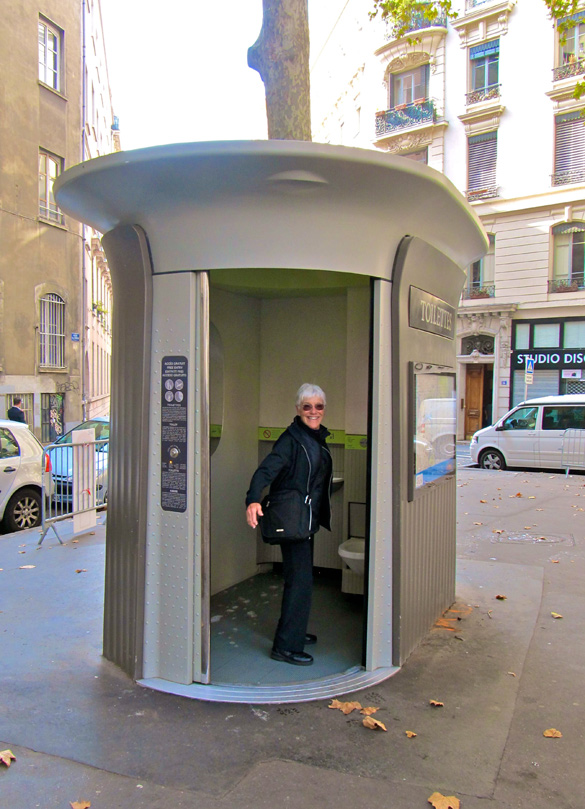 Joyce Nickols of Los Alamos in a self-cleaning restroom in Lyon, France. Photo by Sherry Hardage

Solo Traveler
What the French Do Best
By SHERRY HARDAGE

The Michelin guide in France is known for its unfettered judgment of the best restaurants and chefs.

There are a maximum of three stars awarded to any given restaurant. When a chef loses a star, it is said to be as traumatic as the breakup of a marriage.

Reviewers who work for Michelin are anonymous. Their jobs are as secretive as any CIA agent. Even their own families are not allowed to know their occupation, for fear they might become recognized and lose their ability to pass as a run-of-the-mill patron. They do not judge the decor of an establishment, nor pay any attention to the monetary value of a meal. They judge solely on the quality of the food, the presentation, and the knowledge and attentiveness of the staff.

A single judge is never allowed to award a star, several reviewers will write up their experience at a particular restaurant and over time, the decision will be made to award stars.

Lyon is known throughout France as the city with the best food. It sits in a grain growing region, at an ancient crossroads where livestock areas butt up against miles of vineyards, that in turn lie next to truffle forests, and it is upstream on the Rhone from the warmer vegetable growing areas.

I had read about adouillette, a long time before visiting Lyon, but forgot why it was considered so delicious. When it was on the Midi-menu, a three-course meal at lunch, in a dark little restaurant in Old Lyon, I ordered it. The smell was delightful, rich and herby. The three mustard sauce tanged with a hint of spice, small pieces of meat melted in my mouth, and the potato dish on the side was heady with melted cheese.

Later that evening, at a party I explained that I wasn’t eating party foods because I was still too full from lunch. An American woman who had lived in France for 30 years moved closer to ask which restaurant had I tried? She expressed shock that I’d eaten andouillette and lived to tell about it. “Horrible,” she said, “just pig guts and oh god, the smell!” I assured her it was one of the best meals in my life.

Any cuisine that can turn pig intestines into a delicacy has my vote for best in the world. On the opposite end of the alimentary process, the French also excel. In a little park in Lyon, my friend and I found a public restroom. It was a small, oval, prefab building. We could hear laughter inside. The curved wall slid open and a man came out with his children. The door shut immediately.

We couldn’t figure out how to get the door open. He explained that the unit was washing itself and would reopen shortly. Sure enough the door slid open and revealed a very wet room that smelled vaguely of disinfectant. The toilet self-flushed, the floor was hosed down, and the sink had rinsed itself from little holes around the rim.

The most amazing part was that it cost nothing, it was a service of the city. In Paris we had gone to a beautiful facility in the Carousel at the Louvre. It cost 2 Euros (about $2.80.) We were escorted individually to our own private WC with a sink and Dyson hand dryer. It was spotless. The toilet paper, for sale at the boutique, was printed to look like a roll of American dollars.

The French also excel at transportation, moving people quickly and in huge numbers. The Paris subway system is one of the best in the world.

The whole country is crisscrossed with high-speed trains, known as the TGV. The regional trains aren’t particularly slow either, they just stop at every little town with a station. Regional and local buses come to meet the trains, to ferry people on their journey. Only in the less populated farming areas would a person need a car.

I was terrified, actually, to rent a car and drive in a country inundated with roundabouts where I didn’t know the rules, and didn’t speak the language. But each roundabout was diagrammed on a billboard long before entering, and there were good signs at each exit. The most obscure roads were all in excellent condition, smooth and bordered by narrow grassy shoulders.

Plus, there appeared to be only four speed limits: 30 (kilometers per hour) in towns, 50 on fast streets through towns, 70 on country roads and 110 on the toll roads. It was good to know all that before I drove, as speed limits were not often posted and it was easy to go 100 on those smooth long stretches out in the country!

Editor’s note: Sherry Hardage lives in Los Alamos and has been traveling solo in the Americas, Europe and Asia since she retired from Honeywell in 2009. She is a photographer, writer and guide who organizes tours of Chiapas, Mexico through her website www.mexadventures.com.

Follow the continuing adventures on the travel blog http://sherryhardagetravel.blogspot.com/.