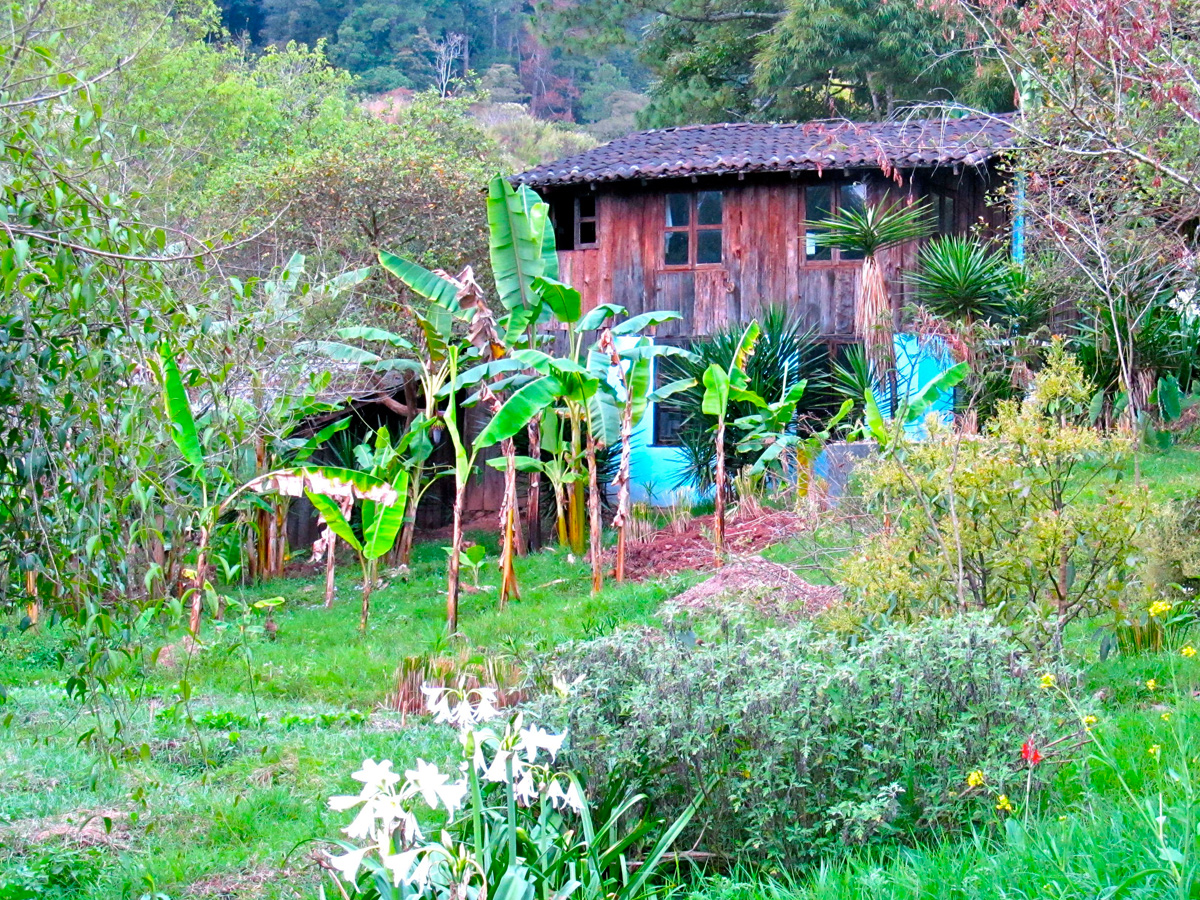 A home at the permaculture community. Edible plants are grown with flowers and grasses to eliminate the need for pesticides. Photo by Sherry Hardage 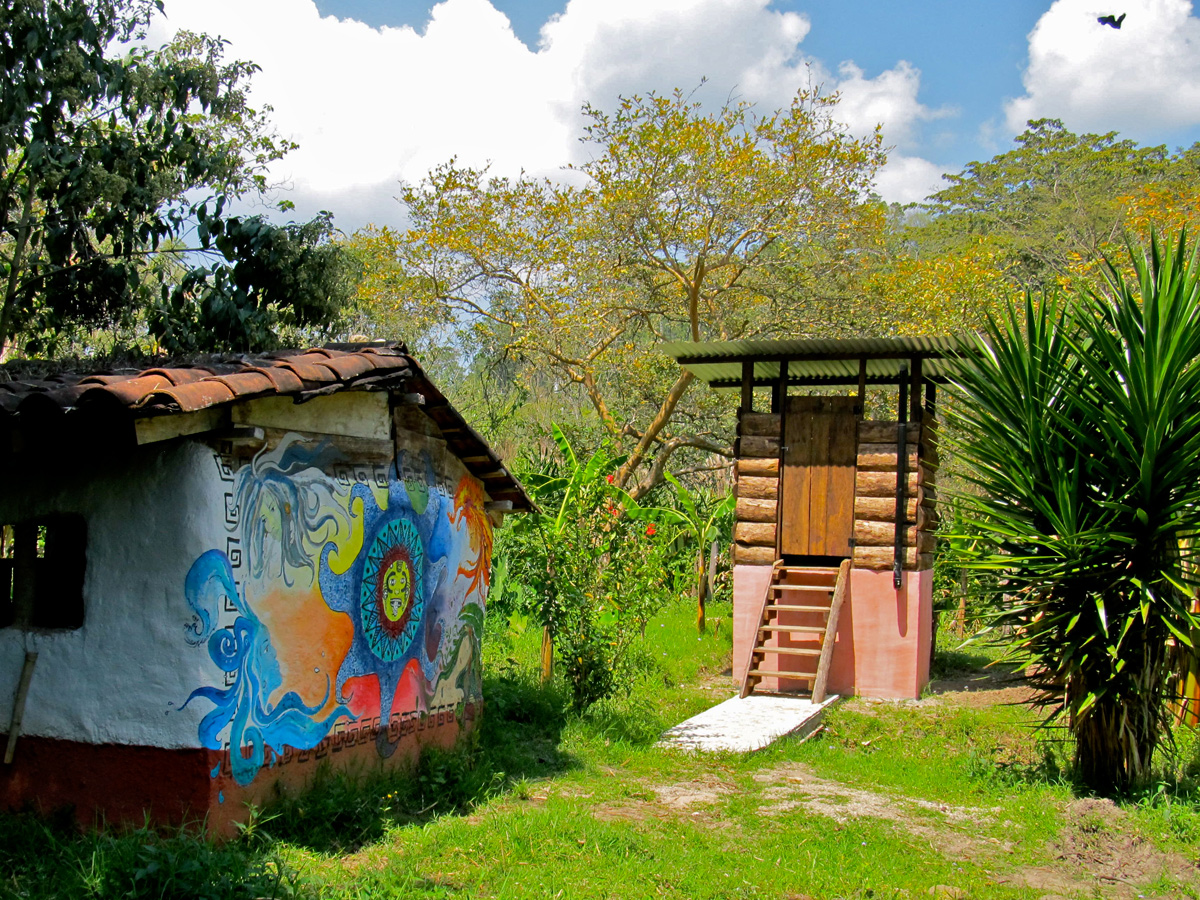 A composting toilet used at the permaculture community. Photo by Sherry Hardage

I have mentioned in earlier columns that one of the huge benefits to solo travel is meeting people you probably wouldn’t have met if you’d traveled with a friend. While friends are great for security, companionship and sharing costs, traveling alone forces you to connect with locals and other travelers.

A couple of years ago I met a man in a movie theater in Mexico. The theater was a small room inside a vegetarian restaurant. They specialized in avant guard films and documentaries.

Arnulf was a German gentleman with a halo of white hair. He spoke English very well, and was in Mexico for two months to learn Spanish. We were the only two people in the theater and we chatted a bit before it started. The documentary disturbed us both so we had tea in the restaurant afterwards to discuss the film.

A few days later, he introduced me to his Spanish teacher Edith. We hired her for five hours a week of joint tutoring. A nice friendship developed between the three of us, and some of our classes involved cultural field trips – to Mexican cantinas!

Arnulf fell in love with Mexico and changed his name to Arnulfo. He liquidated his German life and moved to Chiapas. Recently he moved again, to a little commune along a river near Ocosingo. It is a permaculture community where people practice environmental sustainability.

Travelers who stay there pay a small amount for room and board, and agree to do their share of the community’s work. They grow most of their own food, raise honeybees and make jams and jellies to sell. Clay is mined on the hillside that is used to make the community’s dishes and cups, plus a few extras to sell. Some of the people make jewelry and other crafts.

Arnulfo, since he intended to stay for several months, was put in charge of the coffee harvest. With a little help from others, he harvested hundreds of pounds of coffee cherries. He de-hulled them, then dried and roasted enough coffee beans to last the year.

The trees grow in a couple of areas on the farm, with other crops like bananas, salad greens and berries planted in the dappled shade below. I had the pleasure of spending a few days at the community, just to see what life in a well-run commune was like. My negative impressions of communes were based on what I saw in the 1960s, when hippies lived in squalor, often too drugged to notice their naked children running around hungry.

This modern commune has a few basic rules: no drugs, no alcohol, trash is minimized and recycled, and no soap in the river! The group eats meals communally, with teams of four people assigned to make each meal. There are no bathrooms in the traditional sense. Toilets are composters that sit high up on raised platforms. Bathing is done in the river or in a shower house where water is heated by gas heaters, or black pipes coiled in the sunshine.

Houses are basic rooms supplied with electricity for light. None have bathrooms or kitchens. The founders were a young couple 30 years ago, a French woman and her Lacóndon Mayan husband. They purchased the land and invited others to come help them farm. Eventually they converted the ownership of the land to a corporation, but have been the defacto leaders of it ever since. They give seminars a couple times a year on sustainability and organic permaculture gardening.

A NASA funded study has been referenced, recently, on several news websites. It talks about the sustainability of our current civilization and high-tech lifestyle. The future doesn’t look good for long-term survival at our current rates of consumption. I suspect that people like these, well versed in permaculture and a sustainable lifestyle, will be the ones who best survive the coming collapse.

Editor’s note: Sherry Hardage lives in Los Alamos and has been traveling solo in the Americas, Europe and Asia since she retired from Honeywell in 2009. She is a photographer, writer, and guide who organizes tours of Chiapas, Mexico through her website: www.mexadventures.com