As a retired solo traveler, cost is my main concern when I want to go anywhere.

A hotel room costs almost as much for one as for two, making traveling alone rather expensive. Hostels and pensiónes can also be a bit pricey even when the bathroom is shared.

From my perspective, the best way to extend travel funds is to travel slowly. Find an area of the world that sounds intriguing, rent a small furnished apartment and stay a while.

Food everywhere is cheaper when purchased in the markets and cooked at “home.” If the utilities are included, monthly expenses can be kept to a bare minimum.

There are many resources on the web for finding small places to rent. For people who enjoy getting to know other people and don’t mind living with them, there is a website: www.Airbnb.com

People with a spare room or master suite can post their accommodation for visitors. The cost is usually a lot less than a hotel room with the added benefit of built-in new friends who would know and care if you didn’t come home at night. Most Air B&B hosts allow the use of their kitchens as well. Some even serve breakfast!

The best way to travel alone is to find a way to stay for extended periods of time for free. House-sitting is one means of doing this and there are numerous house-sitting websites.

Some sites specialize in certain countries or continents; others are global. All of them match up travelers with homeowners who want someone to watch after their place, and usually their animals, while they are gone.

I took care of two cats in North Carolina in the fall of 2011. The owner, Susan, was also a solo traveler who often arranged for someone to stay at her place while she spent time house-sitting for others in Europe or South America.

Early on, it became obvious that there were far more people wanting to house-sit than opportunities to do it. On the website www.TrustedHousesitters.com there are feedback forms for the sitters and the owners.

After a couple of good experiences, my chances of being the chosen house-sitter went up dramatically.

That’s how I landed a week in southern Spain. Rio Gordo is one of many “Pueblo Blanco” towns, whitewashed villages perched on hilltops, picturesque and charming. I watched after seven dogs and two horses in the countryside for a woman who ran a kennel business while she went off to a dog show.

Speaking Mexican Spanish, I had the worse time talking to the neighbors whose dialect involved chopping off the ends of many words and slurring the rest together. They could understand me, but I had to ask them to write down their answers! 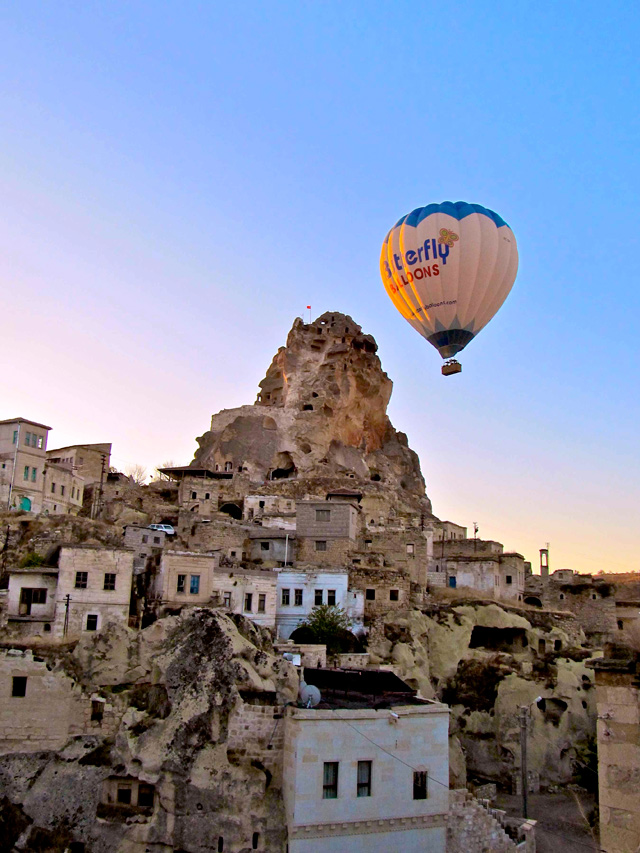 Early morning balloons fly over Cappadocia, past the ‘hisar’ or tower in Ortahisar. Photo by Sherry Hardage

In the Cappadocia region of Turkey, I spent a month cave-sitting for a Dutch woman who ran a guided tour business.

She had three dogs accustomed to long walks, free of leashes, in the canyons around Ortahisar. Aside from the fact that the youngest dog ran off with a pack of wild dogs, more than once, it was a wonderful experience.

I had time between chores to explore a region where human beings have been living in cave homes for thousands of years. Even though I spoke few words of Turkish, it wasn’t that difficult to get around.

However, if it hadn’t been for a few neighbors who spoke English, it would have been an awfully lonely period of time. Even the dogs spoke only Dutch.

Sherry Hardage lives in Los Alamos and has been traveling solo in the US, Mexico, and Europe since she retired from Honeywell in 2009. She is a photographer and travel writer who organizes tours of Mexico through her website: www.mexadventures.com. Hardage welcomes comments via email: hardagesa@aol.com
Menu
Los Alamos
41°
Fair
7:09am5:26pm MST
Feels like: 36°F
Wind: 10mph S
Humidity: 25%
Pressure: 29.92"Hg
UV index: 0
WedThuFri
34/18°F
34/16°F
37/21°F
Weather forecast Los Alamos, New Mexico ▸