Surely every person with a few decades under the belt has a list of things they still want to do before kicking the bucket.

As I’ve gotten older the list has grown. Every time I check off an item I find more places or things to add to it.

Many years ago, I went to San Francisco with a friend. We had such a good time and saw so little of that wonderful city that I vowed one day I would return and live there for a year. At that time, I hadn’t traveled much outside the U.S. and thought I would love to live for a year in different American cities.

But as retirement and more freedom approached, that goal changed to become a year in different countries, with a month or two in each of the largest cities. After actually traveling for a while and realizing, on some deep level, how huge the world really is, I revised it to a month in a single country with a week or two in specific cities.

Last fall, with three months available before Christmas, I decided to spend autumn in Europe. As a member of the TrustedHousesitters website, I looked to see if there were any good house sitting opportunities in Spain, Turkey or Italy, which meant, of course, free lodging!

There was a British woman looking for help during October in Cappadocia. Her house was a partial cave! We met face-to-face over Skype and she hired me. That arrangement completely filled in the month of October. 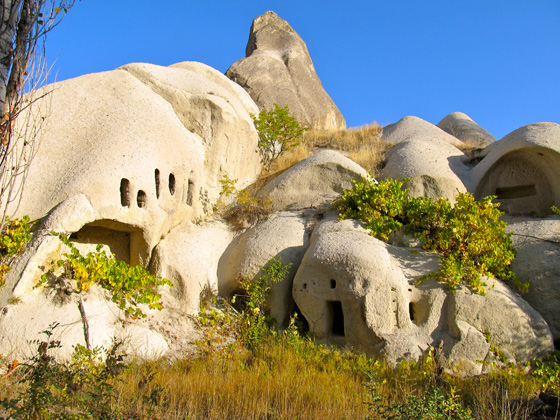 I went on the Internet and found a place in Madrid on AirBNB. I would have my own room with a bath, and share the rest of the apartment with the owner. Her condo was on the outskirts of the city, but close to a Metro stop. It was a lot cheaper than other accommodations in the city, so I signed up for two weeks.

Then, because Barcelona was such a huge touristy place, I booked a week with another woman in the popular Born neighborhood.

Prior to making these firm plans, I had no idea what I was getting into, or really how complex European cities are. Most have grown organically over the centuries and don’t follow any logical grid pattern. In that respect, they are a lot like Santa Fe – on steroids.

So Spain took up some of August and all of September, with 10 days between Madrid and Barcelona. That was just enough time to visit Sevilla, and then Granada, where I could check the Alhambra off the bucket list.

Italy remained unplanned, but its time frame was the last three weeks of November.

Two friends mentioned they would be going on a tour of St. Paul’s missions in Turkey in late October. We decided to meet up in Ankara and then fly to Rome for a week. Back on the Internet, I researched houses available on Vacation Rentals By Owner. This time I didn’t have to look for cheap digs, as we would be sharing the cost three ways. We got a lovely apartment in Trastevere, where we each had our own room, right on the river and near the trains.

Those two friends left after a week, and a different friend joined me for the rest of the time in Italy. Since late autumn was off-season, we planned as we went along and used several websites to find places in Rome, Florence and Venice; furnished apartments with complete kitchens, bedding and towels.

Years ago, my friend Kevin planned his family’s seven-week vacation. He had every day scheduled, the hotel rooms reserved, and even a list of acceptable clean restaurants in each city. He planned their days with such precision that the kids complained–they just whizzed past such cool attractions as the West’s Largest Prairie Dog Town.

The reverse of excessive planning is winging it. That approach can leave you out in the cold if you didn’t know about some huge festival where every hotel room is taken.

I tend towards a half-way approach. Somewhere there is a germ of a trip in mind, and a timeframe. Then I poke around in the cosmos of the Internet and find interesting things I’d like to see. After a while, the time to spend in each place becomes apparent and the trip starts to break down into manageable chunks.

After that, it’s simply a matter of buying plane tickets and finding affordable lodging. If I talk about it enough, I might even find a friend who wants to tag along for a while and share the expenses.