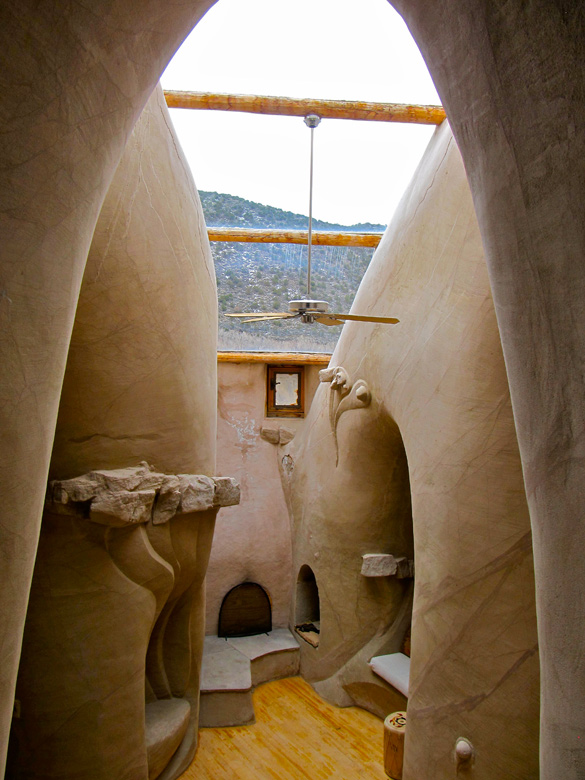 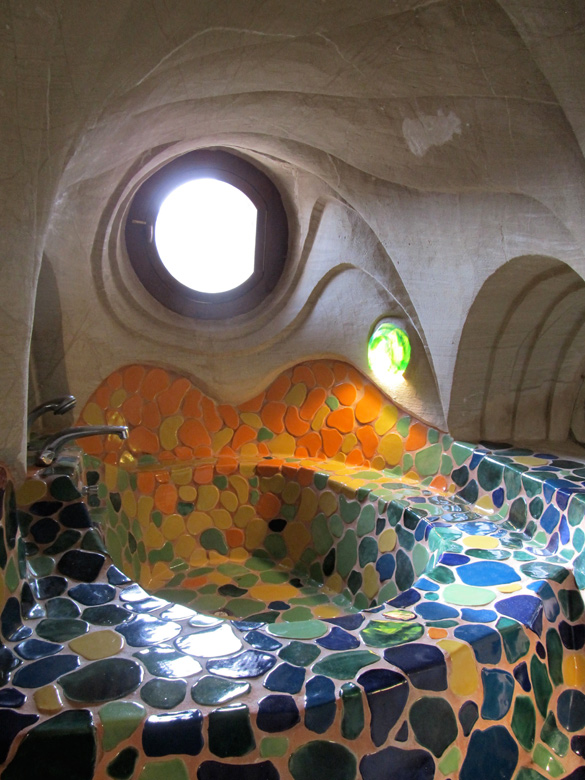 I had the fortune a few years ago to house-sit for a Dutch woman who owned a cave home in Ortahisar, Cappadocia.

Her house was built over an old cave that started out as a large bubble in a hot ash flow. The soft volcanic tuff was enlarged in prehistoric times to form a living space.

The guestroom was created when the cave entrance was walled in with blocks of the same volcanic rock. The room once had two large holes in the roof for the smoke from an open fire pit. Judging from the thickness of the black soot on the ceiling, the cave had been used as a primitive home for a very long time.

When the house was built on top of the cave, the two holes were plugged with giant rocks. From the vantage point of my bed, looking up into the domed ceiling, the two rocks looked like eyeballs, slightly skewed in blackened eye socket holes. Water dripping down over the centuries had washed away some of the soot and re-deposited it in a curve that formed a large hooked nose.

Parts of the walls were scraped with tools to give a uniform texture. Those deep gouges, in the darkened room looked like hideous crooked teeth. Every night I looked up into the face of a monster before drifting off to sleep.

New Mexico has very similar geology. The Jemez Volcano last erupted a little over one million years ago and left thick layers of tuff over a huge area. Long ago, pueblo people enlarged natural holes in the tuff for cave homes, too. Northeast of the Jemez there is a soft pinkish sandstone that can be seen from the road that follows the Rio Grande, on the way to Taos.

A sculptor, named Ra Paulette, has made a career carving caves in sandstone and tuff. He spends hours creating floral motifs and organic forms in the walls. He makes benches of stone for couches and chairs, sometimes putting a seat deep inside its own decorated cave.

Near Dixon, he carved a home, complete with bathroom and kitchen.  It belongs to a ceramic artist named Shel Neymark, who collaborated with Paulette on the design and décor. Neymark created the freeform kitchen sink, tiles, sconce lamps, and the sculpted bathtub. The floor is both smooth natural sandstone and raised wood. In the center of the wood floor is a hollow about 4 feet deep covered with a platform. It’s a foot drum and resonates throughout the house. 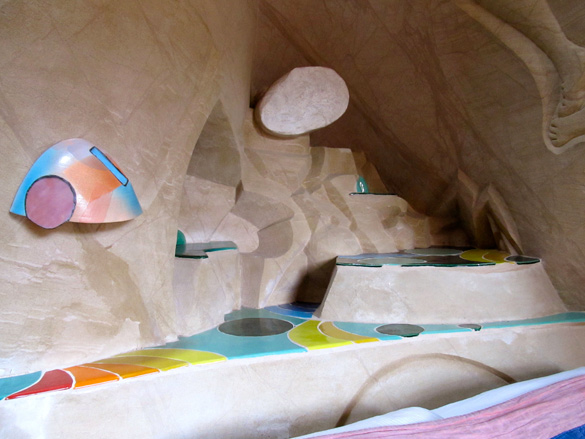 Head of the cave bed. Photo by Sherry Hardage

I had the opportunity to spend a night there a few weeks ago with a couple of friends. The space was designed with a large part of the ceiling missing, covered by glass. The living room is light and airy, warms up in the sunshine, and holds enough heat to stay reasonably warm through the night.

The home has all kinds of musical amenities like gongs, bells, flutes, a guitar, and of course the foot drum for a deep booming sound. We had such fun playing music, singing songs (when we could remember the words) and sleeping under the moon and stars that shone through the glass ceiling. It was a magical experience.

Such a fluid organic space gives the impression of residing inside the mind of its creator.

The cave can be rented periodically. Contact the owner by email if you are interested in seeing it or want to stay overnight: shelneymark@windstream.net