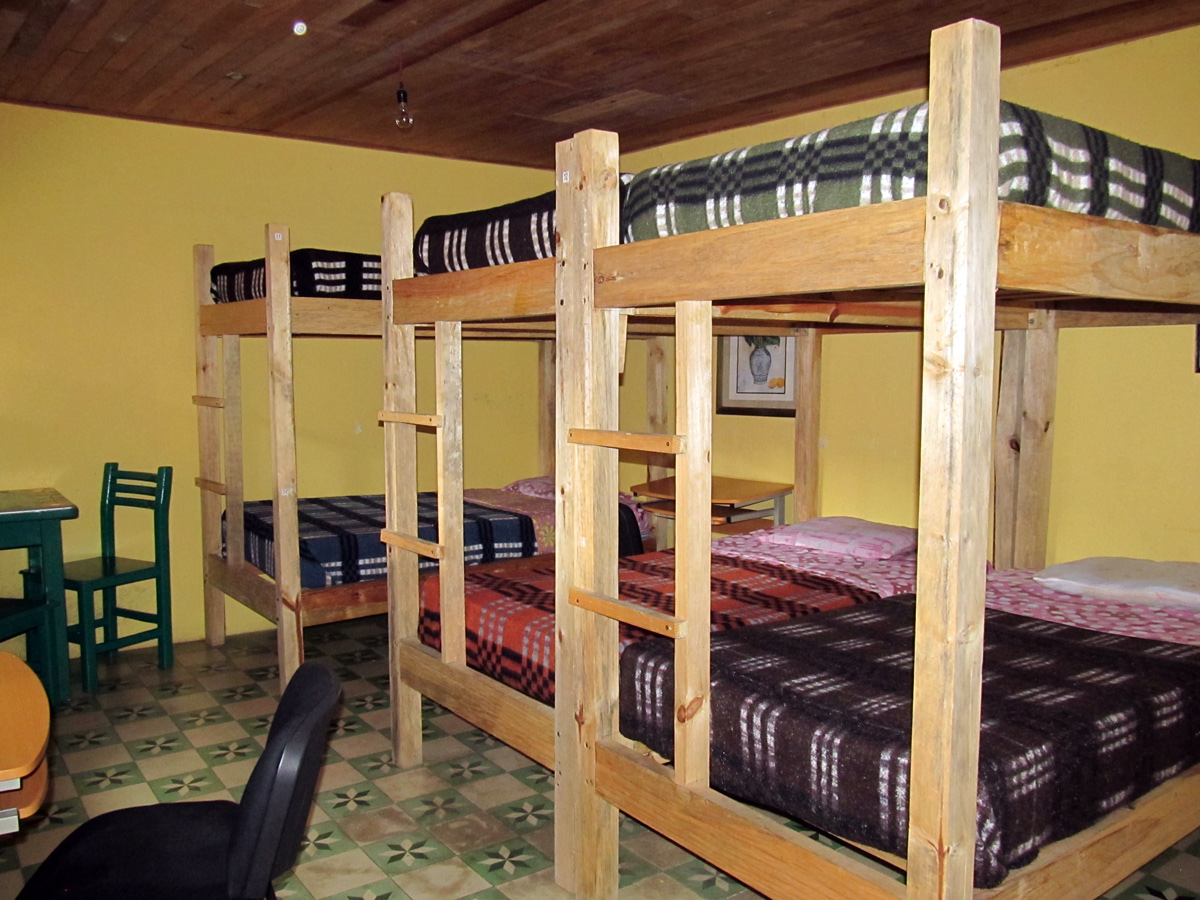 Recently, while traveling across the Yucatan I spent a bit of time with a lone Dutch backpacker. During our bus layover, we ate lunch and I lent her my Mexican phone to call a couple of hostels in Valladolid. She would be arriving quite late that evening. I asked how often she stayed in hostels and she said “most of the time but not always. They are very social places and sometimes I want to be alone.”

I have rarely stayed in hostels, or pensiones, as they are sometimes called in Spain and Latin America. I was under the impression they are cheap, noisy, full of bed-bugs, and that people steal things. But I stayed for a few days at one in Sevilla, where I had my own tiny cell-like room. It was clean, owned by the family that lived upstairs, and was located down a quiet alley.

The common threads, for this type of accommodation, are shared bathrooms. Private rooms are sometimes available, but it’s rare to find one with its own bath. Often, the beds are bunk beds, with as many as 10 in large gender-specific rooms. Guests usually have a locker for their belongings, but still, theft is a problem. A lot of backpackers get low on money while traveling and resort to getting more in despicable ways.

The thing about hostels and pensiones is that you don’t have to be lonely unless you’re really set on it. In fact, the sheer volume of people can make you spring for a private room, once in a while, just to have a door to close.

As an older person, not hell-bent on getting drunk or high, I tend to find inexpensive clean hotels. Usually there are other people to chat with so I don’t have to go to dinner by myself.

Traveling alone doesn’t mean being lonely, but there have been times when the blues take over and dominate the long nights. That’s when the school of hard knocks forces me take a refresher course.

Traveling alone is a great way to understand one’s self. In arrogance, I assumed I knew myself quite well before I started traveling. But after the first few weeks on the road, alone in my van, or traveling in foreign countries, I’ve discovered many personal traits that needed to be looked at closely.

For instance, when I’m lonely I tend to overeat … a lot. Boredom is another eating trigger. Chocolate is a great companion for the blues, but doesn’t really put a dent in boredom. And the pounds that result from chocolate are even more depressing. It often takes pair of jeans I can no longer button before I become aware I’m in big trouble. Then I have to remember what works to get me out of the hole.

I tend to withdraw when I’m unhappy, and that’s the last thing I should do. After a week of prolonged loneliness while house-sitting in Turkey, I had to force myself to interact even though I couldn’t communicate very well. I found a shopkeeper who agreed to teach me some Turkish, and that was the rope that pulled me out of the doldrums. With a few phrases for good morning, and thank you, I could use sign language and body language to interact and learn about people.

Exercise is another way to chase away the blues. Getting the blood moving and being outside in the sun can do wonders for the body and mood.

From afar, I’ve used Skype and other programs to call friends or family for a chat. It’s good to call someone who has been in the same dark place, someone who can talk me through it. Or sometimes the best person is just a friend who would be happy to hear from me. Delight and joy are contagious.

If I just can’t seem to shake it, a long evening of writing down how I feel and exploring what those emotions are about is a good step. Sometimes, reading a good novel will chase the blues away. The worst thing I can do during a dark time is drink alcohol, though I’ve chosen that option more than a few times.

There’s a lot to be said for traveling alone. I make all the decisions: eat (or not) when I want, wake up and go to bed on my own schedule or dally for hours in a museum. But it can also be lonely. I have to watch myself to make sure the loneliness doesn’t become more serious depression.

It’s too bad that self-care isn’t always at the forefront of my mind. But knowing what to do, from trial and error, does get me started back to my normal happy self.