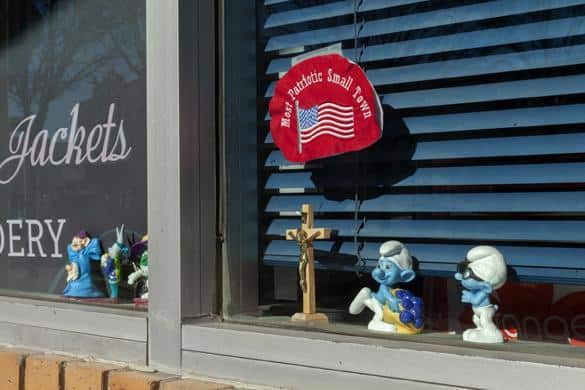 A piece in the ‘Most Patriotic Small Town in America,’ project by photographer Wendy Young. Photo by Wendy Young

‘At the Narrows’ by photographer David Halpern is part of his Black Canyon of the Gunnison series being shown for the first time in the ‘So Far From Heaven’ exhibit in the Upstairs Art Gallery at Mesa Public Library. Photo by David Halpern

The artists have taken the title of the show from a quote attributed to the last Mexican governor of the territory of Nuevo Mexico, Manuel Armijo, who said “Poor New Mexico! So far from heaven, so close to Texas!” Like many New Mexico residents, these photographers beg to differ.

According to the catalog for the exhibit, which will be available at the opening reception on June 7, “These six photographers, some relative newcomers and some life-long residents, have found the New Mexico landscape and culture uniquely stimulating and the life rewarding.”

Gittings has been a full time professional and fine art photographer since 1978. He has served as a visiting artist/instructor at the School of the Art Institute of Chicago and as an adjunct professor at both the University of New Mexico and the Santa Fe University of Art and Design. Gittings’ work has been featured in more than 125 solo and group shows and is included in several distinguished public art collections, including the Library of Congress.

Halpern has been photographing for more than 65 years, driven by his love for the American landscape. Halpern’s Black Canyon of the Gunnison images are being shown for the first time in this exhibition, in conjunction with the publication of a book on that subject.

O’Brien is a documentary photographer who was born in New York City and has made his home in Santa Fe for the past 45 years. He is the author of Afghan Dreams: Young Voices of Afghanistan and Light in the Desert: Photographs from the Monastery of Christ in the Desert. His photography has been exhibited nationally and internationally. His work is archived at the Palace of the Governors Photography Archives and at the Briscoe Center for American History.

Pietrzak enjoys printing his photographs in a direct contact process, creating small, jewel-like photographs.  He makes platinum/palladium prints that emphasize light and form. His work has been widely exhibited in the United States and in Europe.

Usner grew up in Los Alamos and Chimayò. He has authored and provided the photographs for several books, including the “Natural History of Big Sur”; “Sabino’s Map: Life in Chimayò’s Old Plaza”; “Benigna’s Chimayò: Cuentos from the Old Plaza”; “Valles Caldera: A Vision for New Mexico’s National Preserve”; “Chasing Dichos through Chimayò”; and “Òrale! Lowrider: Custom Made in New Mexico.” Recent public exhibitions of his photography include work in the shows “Lowriders, Hoppers, and Hot Rods: Car Culture of Northern New Mexico” at the New Mexico History Museum and “Con Cariño: Artists Inspired by Lowriders,” at the New Mexico Museum of Art. Usner will show a series of work shot in Romania, where he documented a community of Roma people.

Young is a photographer and educator currently residing in Cerrillos. Her images have been shown at the New Mexico Museum of Art, the Santa Fe Art Institute, photo-eye Gallery and the Ross Museum of Art. She is exploring what patriotism means in America today in her project about Gallup, named “Most Patriotic Small Town in America.”

“So Far From Heaven” will hang in the Upstairs Art Gallery throughout the month of June. It will be followed by a travelling exhibit of art quilts by members of the Studio Art Quilt Associates, called “Life Along the Rio Grande” in July.

The current exhibit in the Gallery, “Calligraphy in Clay,” by Mei Li (Su Fong) Milonni,  will be shown through the end of May.

The Gallery is open to the public during regular library hours. For more information about library events, visit the website at www.losalamoslibrary.org and click on “Events.”

‘Woman in the Doorway of Her House, Pata Rat, Romania’ by Don Usner. Usner shows work documenting the lives of Roma people in the upcoming exhibit in the Upstairs Art Gallery at Mesa Public Library. Photo by Don J. Usner