Snyder: Weaving History For A New Look At An Old Familiar Landmark 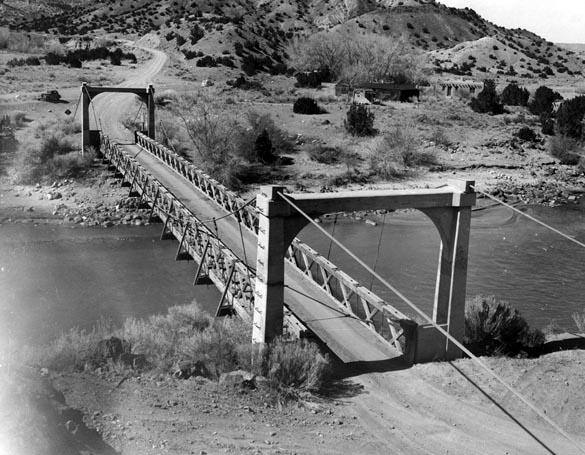 Otowi Bridge as it looked in the 1930s with Edith Warner’s house in the background. Courtesy/Los Alamos Historical Society archives 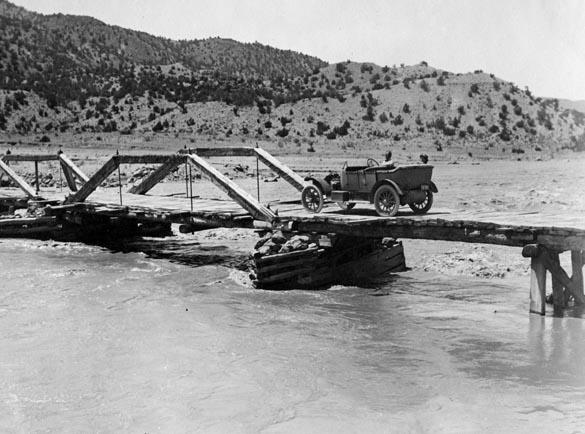 Buckman Bridge to the south of Otowi was a questionable route across the Rio Grande. It frequently washed out in the rainy season. Courtesy/Los Alamos Historical Society archives

In 1923, a plea was made to State Representative Elfego Gomez by Manuel Lujan Sr. for a bridge across the Rio Grande. In his letter, Lujan stated, “A bridge across the Rio Grande at Otowi would serve a large number of people, ranchers on the west side of the river who produce 300 tons of grain under normal conditions and the entire Pojoaque valley.” He was voicing his support of a bill that had recently been introduced in the House by Gomez and two others.

Lujan knew firsthand that the bridge was needed. His father owned a homestead on the Pajarito Plateau, and his son, Manuel Lujan Jr. owned 150 acres of adjacent land. They raised crops that had to be taken across the river to the valley for sale.

He also pointed out that a bridge at Otowi would be “of the utmost importance, not only to the people of San Ildefonso, Pojoaque and Nambe, but to tourists visiting the cliff dwellings.”

Despite that fact, there were others in the area who opposed the bill, particularly a citizens committee in Española that thought “the bridge would be of little value to the public.”

At the time the Lujans and others felt a need for a bridge, there were other options for access to the west side of the river, but they were far from convenient or safe. It was possible to drive over the Denver and Rio Grande narrow gauge railroad trestle at Otowi by stradling the rails and bumping along over the wooden ties, but it couldn’t be done quickly and one had to be certain of the train schedule before attempting such a passage! The other option was farther south at Buckman where a rickety, one-lane bridge spanned the river, if it hadn’t washed out recently, as it did almost every spring!

In the early 1920s, Otowi was an unloading point for mail and freight bound for the Los Alamos Ranch School, and Lujan mentioned that in his letter as well. “West of the Rio Grande,” he wrote, “is the Santa Fe National Forest, the cliff dwellings, New Mexico’s greatest assets and advertisements, easily accessible through the graded road of La Culebra hill, built through the efforts of Mr. Connell, head of the Los Alamos Ranch School, and which is an infinitely better and shorter road than the Buckman hill, as people who know both of these roads will admit.”

The need was obvious, and the legislature passed the bill that Manuel Lujan supported with his letter. In 1924 the first bridge over the Rio Grande at Otowi was built. People from Los Alamos pass to the left of it every time they leave the Hill, and now perhaps they will appreciate that old wood and concrete structure more because they know how it came to be there. However, there are other interesting connections with its history to consider. Members of the Lujan family have been and continue to be connected to our history in other ways. After losing his homestead to the Manhattan Project, Manuel Lujan served as the mayor of Santa Fe for six years. His son, Manuel Lujan Jr., served in the U.S. House of Representatives and became Secretary of the Interior.

Current U.S. Congressman Ben Ray Lujan is his nephew, and Michelle Lujan-Grisham, future governor of New Mexico, is his niece. Today, the old bridge is listed on the National Register of Historic Places as a part of the Otowi Historic District, land that is owned by the Pueblo of San Ildefonso.

It sits beside a modern, four-lane version, with its present uses listed as government, private residences, scientific, and transportation.