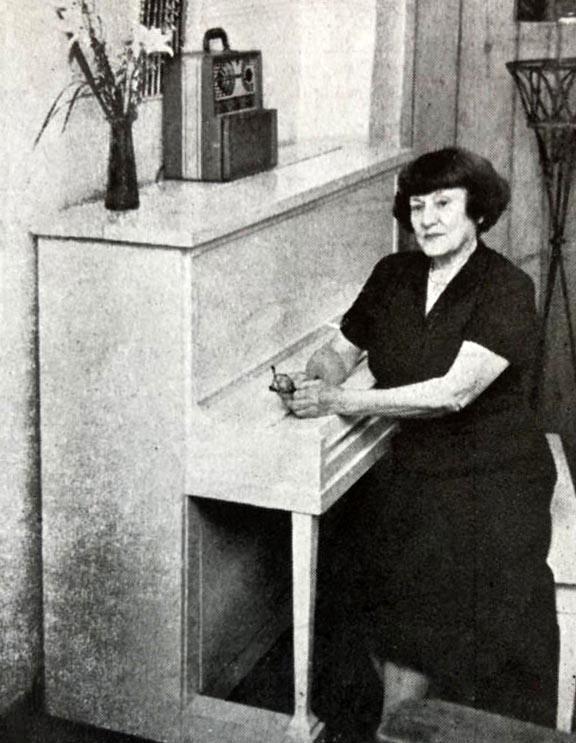 Mrs. Frey sitting at her piano in Bandelier (date unknown). Courtesy/Los Alamos Historical Society
By SHARON SNYDER
Los Alamos Historical Society
Recently I met up with friends who were visiting Bandelier National Monument for an afternoon. I hadn’t seen them in a long time, nor had I visited Bandelier in several years. We had a fine afternoon, and at times I found myself reminiscing about a lifetime of visits to the park.
One of my clearest memories of my teen years is of Mrs. Frey, an elderly woman who was always present somewhere in the visitor center or the curio shop. I couldn’t know then that this woman would become an important and revered figure in our local history or that the story of her piano would capture my attention many decades later.
George and Evelyn Frey, with their 10-month-old son, Richard, moved from Albuquerque to Frijoles Canyon in 1925 to run a guest lodge in an area that had been declared Bandelier National Monument only nine years earlier. Their closest neighbor was a seasonal park ranger who spent only summers at his nearby cabin.
Living conditions were crude. The wood and stone buildings were adequate but nothing more. There was no indoor plumbing, so water was obtained from the Rito de los Frijoles, and privies stood nearby. Fireplaces supplied the heat, and the wood had to be brought into the canyon from outside the monument.
The only way into the canyon in those early years was a steep, narrow trail a mile and a half long. Chopped wood and all other goods had to be brought down that trail on mules. Through the years, many commodities were carried down the trail that is today known as the Frey Trail, but two things that made the journey into the canyon seem almost impossible. Those items were a Dodge truck and an upright piano! Both the truck and the piano were taken apart, brought down by the mules a piece at a time, and reassembled.
Evelyn had learned to play the piano while attending a Catholic school in Albuquerque. She boarded there during the school year before returning home for the summers to the little lumbering settlement of Pines in the Jemez Mountains.
She had learned to play because “it was what young ladies did,” but in the canyon it must have been a comfort on long evening and perhaps an enjoyment for visitors.
As for the truck, George was an auto mechanic, a skill learned because his father owned an Oldsmobile dealership in Oklahoma while George was growing up.
What happened to the truck is not known, but the piano is still here in Los Alamos!
It is owned today by Bart and Colleen Olinger, and to verify that it is Mrs. Frey’s piano, the historical society’s historic properties chairman, John Ruminer, has traced its journey.
Evelyn Frey died in her Bandelier quarters in 1988 at the age of 96. The piano was purchased from her estate, bought by a young woman living in Los Alamos who often worked as a babysitter for the Naivar family. She eventually sold the piano to them. From the Naivars, the piano passed into the hands of Christopher Cattlett, and in turn, it was sold to the Olingers. To substantiate that this piano could, indeed, be Mrs. Frey’s piano, Ruminer traced the serial number of the piano. It was bought from the Hamilton Piano Company in 1923, two years before the Frey’s moved to Frijoles Canyon. The company records list it as a Sub-Baldwin that was sold to an Albuquerque man named Gus Koulas, placing the piano in New Mexico two years before it made the trek into the canyon.
The Olingers have offered to donate the piano to the historical society. If that becomes a reality, it just might be possible that the society would then donate the piano to Bandelier, and Mrs. Frey’s piano would go home again. Only this time, it would be a much easier journey.
Menu
Los Alamos
91°
Sunny
5:48am8:23pm MDT
Feels like: 91°F
Wind: 10mph SSE
Humidity: 8%
Pressure: 29.74"Hg
UV index: 3
TueWedThu
88/64°F
91/64°F
88/64°F
Weather forecast Los Alamos, New Mexico ▸