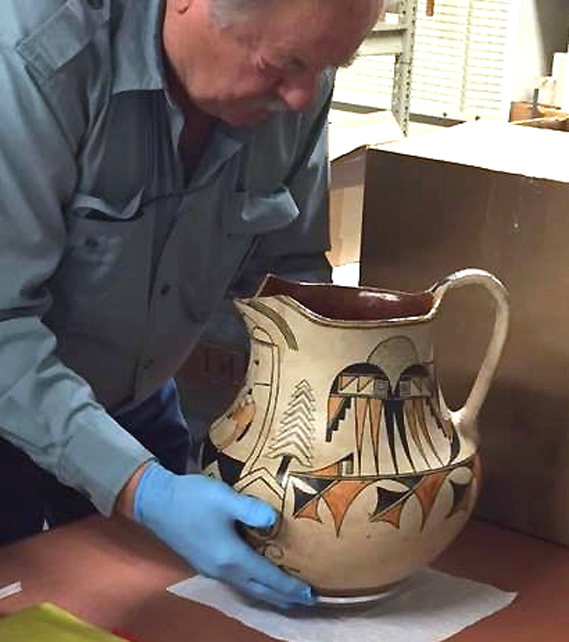 Curator Don Cavness with the pottery pitcher made by Maria Martinez for the Los Alamos Ranch School, circa 1915–1920. Courtesy photo 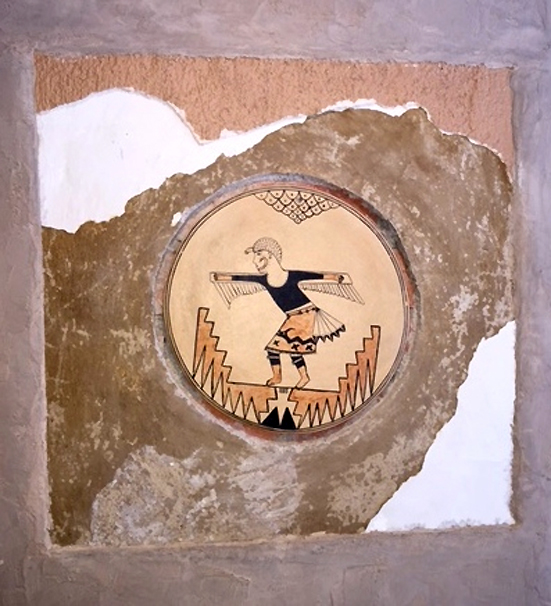 The eagle dancer disc embedded in the fireplace of the Ranch School Guest House, now a part of the Los Alamos History Museum campus. Courtesy photo

Would any history museum in this area of New Mexico be complete without a piece of pottery by Maria Martinez, the famed Potter of San Ildefonso? For me, the answer is “no.”

A polychrome pottery pitcher, circa 1915–1920, incorporates a Los Alamos Ranch School-related design fashioned on the logo created for the school by artist Gustave Baumann. This piece was commissioned by the Ranch School, which enjoyed a close relationship with the potter, but when the pitcher was purchased, it wasn’t signed. Maria didn’t begin signing her pottery until 1923. The pitcher remained unsigned until 1973 when Maria identified the piece as her handiwork and added her name, along with her husband’s name, Julian, to the lower side. His name was an appropriate addition since he painted her pottery until he died in 1943. Photos were taken of Maria holding the pitcher she had made so many years before.

A second piece of pottery is less documented, though it seems certain that the piece is an early Maria Martinez work. Embedded in the face of the Guest Cottage east room fireplace is a painted, polychrome pictorial pottery disc. Unfortunately, the museum archives have neither cataloging nor other provenance for the disc. Its story is a mystery.

The polychrome disc is painted with a Native American eagle dancer in red-orange and black. The dancer’s costume has a water serpent and apparent stars on the lower cloth, and above himare possibly stylized clouds where a small hole is drilled through the disc. Under the dancer is a stylized mesa step motif.

This beautiful piece looks similar to at least three others seen in photographs taken inside the Ranch School’s Big House, a structure that was decorated with pottery and rugs to complement its rustic, log construction. The disc exhibits details reminiscent of the paintings of Julian Martinez, but the archives cannot conclusively catalog him as the artist nor Maria as the potter. However, another item that points to the authenticity is pictured in The Legacy of Maria Poveka Martinez by Richard L. Spivey—an eagle dancerdisc, 9” diameter, c. 1925, and signed Marie, the name used by Maria on her early pottery.

The disc has been conserved by Bettina Raphael of the Southwest Conservation Laboratory in Santa Fe. A part of the façade of the fireplace was disturbed during the conservation study of the pottery disc, exposing earlier layers of construction. It is hoped that the original fireplace may be restored in the future, but until a final decision is made on how the museum might proceed, the project remains unfinished, giving visitors a chance to see the layers of history within the fireplace structure.

All of this awaits visitors when the Los Alamos History Museum re-opens at 10 a.m. Friday, Dec. 30.