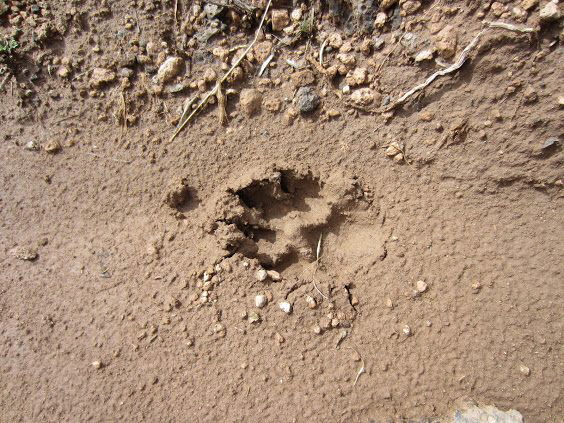 A reader just shared this photo she took a couple of weeks ago of what appears to be a cougar paw print in the mud on the White Rock Rim Trail. UPDATE: Another reader just let us know that this is actually a dog paw as cougars do not show the nail imprints. Courtesy photo

Department of Game and Fish officers are using foot snares to try to catch a dangerous cougar that has killed at least two dogs and attacked another dog this month in Los Alamos.

Snares are set near Ranch School and Acid Canyon trails. More are being set down the canyon off of East Fork trail. The snare traps are set off the trails about 30 to 50 yards. Signs are placed at the gates and in the vicinity of the trap sites.

The Los Alamos Police Department is working with New Mexico Game & Fish and county officials to keep the public safe and away from Walnut and Pueblo canyon where the snares will be placed. Signs will be posted in these areas warning citizens of the snares.

Foot snares are effective in catching cougars and pose little or no danger to people or their pets. Please do not tamper with the snares.

All of the cougar attacks and at least five sightings occurred in an approximately 1-mile area near the county airport.

The cougar reportedly killed two beagles in separate attacks earlier this month and attacked a fourth dog May 14. It was sighted and photographed by a video camera May 18 at the Immaculate Heart of Mary Catholic Church.

May 20, the cougar reportedly attempted to attack a dog in a wire kennel and pulled the dog and kennel off a deck.

The department is advising area residents to keep pets and children inside in the early mornings, evenings and at night until the cougar is caught.

The Department of Game and Fish is responsible for managing large predators and occasionally is called to deal with cougars, wolves and bears when there is a public safety risk. Wild animals, especially predators, can be very dangerous whether they are encountered in the wild or in residential areas.

Here are some ways to protect yourself, your family and wildlife from unwanted encounters with cougars and other large predators:

Cougar encounters and attacks are extremely rare, but if you do encounter a cougar in the wild or in town:

For more information about cougars and living around large predators, visit the department website and check out the publication, Living with Large Predators in New Mexico.