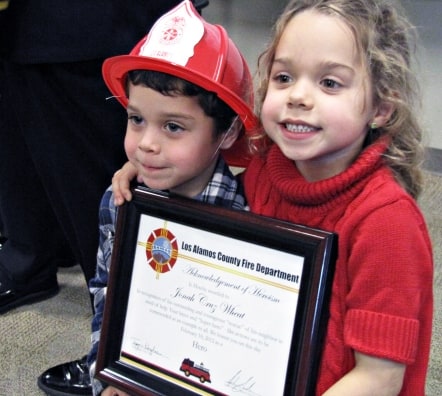 Jonah Cruz Wheat, 5, and his sister pose with his certificate Friday at Fire Station 3
in White Rock. Photo by Carol A. Clark/ladailypost.com.

Jonah Cruz Wheat was just 4 years old on July 12 when he heard a woman cry out for help while he played in his yard.

Playing superheroes is one of his favorite pass times so when his mother heard him enter the house and ask his sister if she heard someone calling for help, she assumed they were just playing.

Amanda Wheat recounted hearing her son go back outside and yell, “Don’t worry … I’m coming … I’ll help you.” She grabbed her phone and ran outside where she saw her son going over the fence.

She quickly joined him and together they discovered their neighbor lying on the driveway where she had fallen.

The woman had broken her hip and shoulder and had tried unsuccessfully for sometime to draw the attention of passing motorists by throwing rocks. 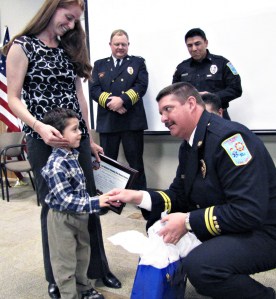 Fire Marshal Brian Nickerson shakes Jonah Cruz Wheat’s hand as his mother,
Amanda Wheat, stands by his side. Photo by Carol A. Clark/ladailypost.com

She has recovered from her injuries and the Los Alamos Fire Department honored Wheat Friday during a special ceremony at Fire Station 3 for his heroism in coming to her aid.

He received a red firefighter helmet, an honorary badge and a leadership coin. He and his family received a pass to the Children’s Museum in Santa Fe.

Wheat received a special tour of the fire station and had lunch with the firefighters Saturday.

Fire officials also showed a video on Friday that Wheat’s family took of him holding a pretend backyard press conference last summer  during the Las Conchas Fire in which he imitated then Fire Chief Doug Tucker.