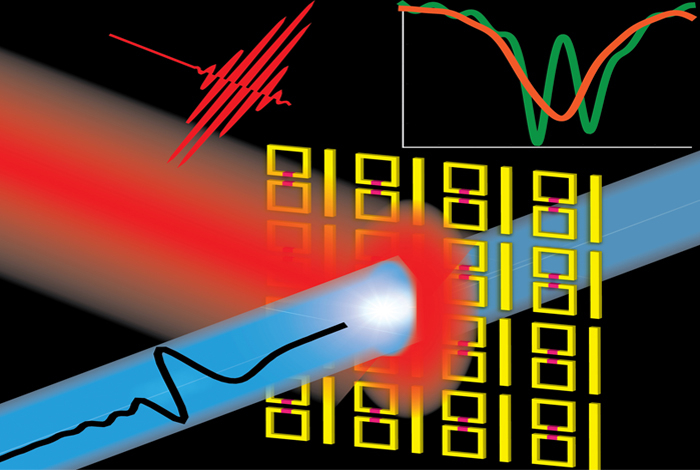 Wireless communications and optical computing could soon get a significant boost in speed, thanks to “slow light” and specialized metamaterials through which it travels.

Researchers have made the first demonstration of rapidly switching on and off “slow light” in specially designed materials at room temperature.

This work opens the possibility to design novel, chip-scale, ultrafast devices for applications in terahertz wireless communications and all-optical computing.

Significance of the research

In slow light, a propagating light pulse is substantially slowed down, compared with the velocity of light in a vacuum. This is accomplished by the light’s interaction with the medium through which it is shining. Slow light has potential applications in telecommunications because it could lead to a more orderly traffic flow in networks.

Like cars slowing down or speeding up to negotiate an intersection, packets of information are better managed if their transmission speed is changeable.

Another potential application is the storage of information carried by light pulses, leading to a potential all-optical computing system. Current semiconductor materials used in computing devices are reaching some of their limits, and an all-optical system would potentially enable improvements in size reduction and calculation speeds.

The effects of strong light-matter coupling used in slowing down light might create entangled photon pairs that lead to quantum computing capabilities beyond those of modern computers, the researchers say.

The key to success is the use of metamaterials, engineered artificial materials containing structures that are smaller than the wavelength of the waves they affect.

Researchers integrated photoconductive silicon into the metamaterial unit cell. This material enables a switching of the transparency resonance window through the excitation of ultrafast, femto-second optical pulses. This phenomenon causes an optically tunable group delay of the terahertz light.

The “slow light” behavior can be controlled at an ultrafast time scale by integrating appropriate semiconductor materials with conventional metamaterial designs.

In this research, the medium is an active metamaterial that supports a sharp resonance, which leads to a rapid change in the refractive index of the medium over a small range of frequencies. This phenomenon causes a dramatic reduction in the velocity of terahertz light propagation.

The U.S. Department of Energy supported the LANL research, which was performed, in part, at the Center for Integrated Nanotechnologies, a DOE Office of Science user facility. The work supports the Laboratory’s global- and energy-security mission areas.

Slow light is just that, light that has been slowed from the traditionally understood standard, 299,792,458 meters per second. While faster-than-light speeds are considered impossible, it is entirely reasonable to guide light through a material that slows or delays the motion of the photons as they move through the medium.

The photons are absorbed and then re-emitted, slowing the transmission from one area to another, and in some experiments the light has been stopped altogether. The measurement of how much light is slowed in a material is known as its refractive index. In a vacuum, there is no delay. Through a diamond, with a refractive index of 2.4, the light lingers for a small time.

Metamaterials are assemblies of multiple individual elements fashioned from conventional microscopic materials arranged in periodic patterns. The precise shape, geometry, size, orientation and arrangement of the structures can affect waves of light in an unconventional manner, creating material properties that are unachievable with conventional materials.

About the Center for Integrated Nanotechnologies

The Center for Nanoscale Materials is one of the five DOE Nanoscale Science Research Centers, premier national user facilities for interdisciplinary research at the nanoscale supported by the U.S. Department of Energy, Office of Science.

Together the NSRCs comprise a suite of complementary facilities that provide researchers with state-of-the-art capabilities to fabricate, process, characterize and model nanoscale materials, and constitute the largest infrastructure investment of the National Nanotechnology Initiative.