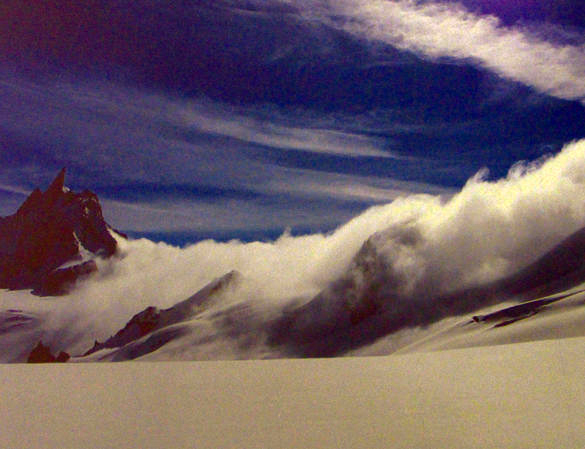 One of Alex Mueller’s shots of the landscape in Antarctica. Mueller shared a number of his photos during Los Alamos Mountaineers’ meeting Tuesday night at the Los Alamos Nature Center. Photo by Alex Mueller

Alex Mueller was in a meeting at Lawrence Livermore when he got a call; a friend asked if he would like to take the ski trip of a lifetime. So in November 2014, Mueller packed his bags, picked up his skis, flew on a plane to Argentina before boarding an ex-Russian ice breaker vessel to Antarctica.

Mueller was among 70 travelers who seized the opportunity to take to the slopes in one of the coldest, most remote and most spectacular places on Earth.

The expedition, he explained to the Los Alamos Mountaineers during their meeting Tuesday night at the Los Alamos Nature Center, was offered by Ice Axe Expeditions.

You have to spend some time there, Mueller said, because on a trip like this you can’t expect your luggage to arrive right on time or assume the ship will wait for suitcases to appear.

So Mueller and his friends went skiing in a small Argentinian town and “dusted off our legs,” he said.

When they boarded the ship and sailed through the Drake Passage, or “Drake Lake,” as Mueller called it, they seized the opportunity to bird watch and photograph whales. They also had a vacuum party.

In order to protect the environment from foreign contaminants in Antarctica, Mueller said passengers needed to vacuum their bags of any dirt, seeds and other debris.

He showed series of pictures of albatrosses soaring above the ocean and giant peaks of icebergs jetting out of the waves. Although the pictures were gorgeous, Mueller said, “Photos don’t do it justice.”

While skiing, Mueller said they encountered completely clear skies but days later would experience absolute white-out conditions. To avoid falling into cravasses, everyone was tied off with sections of ropes.

In between ski trips, the travelers cruised in zodiacs and visited penguin colonies. At the conclusion of the trip, the ship’s crew assisted passengers who dared to take the “polar plunge” or cannon ball into the icy ocean water.

While the voyage going to Antarctica may have been like gliding through a lake, the return trip was something different. Mueller showed a video clip of enormous swells, some reaching 44 feet.

The presentation ended on a tragic note. Mueller explained David Rosenberger, who had organized the trip to Antarctica, perished two years ago in an avalanche. But Rosenberger had a motto that Mueller shared with his audience: “Eyes closed, arms open.” It’s a motto Mueller encouraged the audience to follow. “Let it soak in how awesome life can be,” he said. 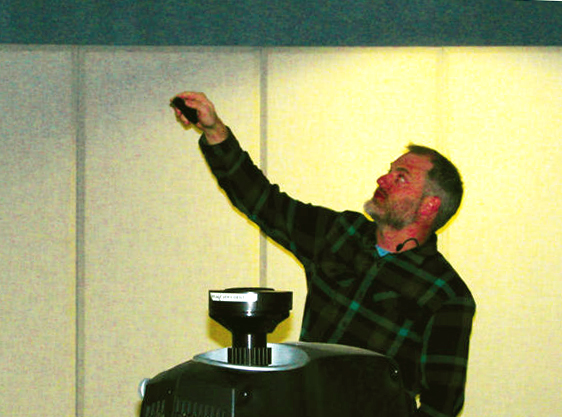