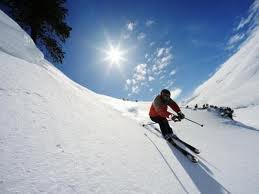 As part of its continued commitment to give skiing enthusiasts open and unlimited access to Pajarito Mountain, the Los Alamos Ski Area and Sipapu Ski and Summer Resort will offer skiers and snowboarders unlimited access to both mountains this upcoming winter, plus free lift tickets at more than 20 other resorts in New Mexico, Colorado, Utah and throughout the country on one season pass: the New Mexico Power Pass.

Passes are available for purchase online at thepowerpass.com, skipajarito.com and sipapunm.com, and at the lift ticket offices for both ski areas.

Offering the New Mexico Power Pass comes on the heels of an earlier announcement this summer that Los Alamos County and the management group that operates Sipapu Ski and Summer Resort are working out details in an agreement to operate the Los Alamos-based ski area for the 2014-2015 winter season.

“We are excited to bring the vision we began at Sipapu Ski and Summer Resort to Pajarito Mountain Ski Area while continuing the legacy that the Los Alamos Ski Club established decades ago,” said James Coleman, Sipapu’s co-managing partner. “Our vision is simple: to offer a consistent ski and snowboard season and make it affordable for everyone. Today’s roll-out of the New Mexico Power Pass is just part of our commitment to achieve that vision.”

First organized in 1943, the Los Alamos Ski Club has operated Pajarito for over seven decades, and in May a majority of voting members approved to transfer the ski area to Los Alamos County and the management group that operates Sipapu.

County and Sipapu officials say ensuring the future of skiing at Pajarito – and especially securing water for snowmaking purposes – is their first priority. The Sipapu Group has been working with the Los Alamos Ski Club and the County to improve Pajarito’s snowmaking infrastructure in order to ensure a full operating season – one that includes daily operations (historically Pajarito’s lifts turn Fridays through Sundays when there is sufficient snowfall). Coleman projects Pajarito will open around Thanksgiving of this year, with daily operations beginning just before Christmas and lasting through the end of March, and weekend operations next April as conditions permit.

Located 70 miles east of Pajarito, Sipapu is the state’s fastest growing ski area and northern New Mexico’s oldest resort. Known for offering the state’s longest ski and snowboard season, Sipapu has been the first ski area to open in New Mexico for more than a decade, and the last ski area to close for 11 of the last 12 seasons. Last winter, Sipapu opened Nov. 16 and closed April 13 – one of the ski area’s longest ski seasons on record – after picking up just over 85 inches of snow for the season, one of the worst snow years in its 62-year history.

In addition to investing in water and snowmaking, Sipapu is working on plans to enhance both the winter and summer on-mountain experience through trail, lift, terrain park, tree skiing, and mountain biking trail expansions and improvements.

Sipapu officials are continuing to communicate these changes on an ongoing basis via a blog on the Pajarito website at pajaritoblog.com.