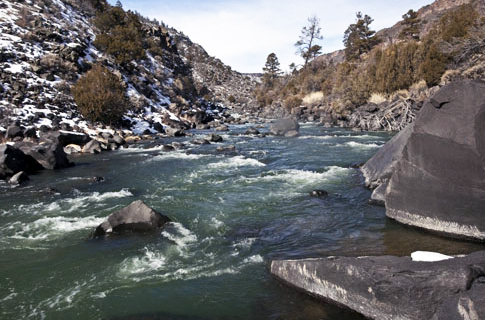 New Mexico’s Río Grande del Norte. Photo by Bob Wick/BLM
U.S. CONGRESSIONAL News:
WASHINGTON – From the Oval Office to Taos, New Mexicans and members of the Congressional Delegation celebrated Monday the Río Grande del Norte National Monument Proclamation that was signed by President Barack Obama.
The national monument designation is widely welcome by Taos and Rio Arriba county residents. A recent study shows the national monument will support hundreds of jobs and bring millions of tourism dollars to the area.
Retired U.S. Sen. Jeff Bingaman, Sen. Martin Heinrich, Questa Mayor Esther Garcia and Taos Pueblo War Chief Samuel Gomez joined the president for the signing ceremony in the Oval Office.
“This is a great day for New Mexico,” Bingaman said. “I’m glad that President Obama found Northern New Mexico’s landscape so compelling that he was willing to make the Río Grande del Norte his largest monument designation to date. There is no doubt in my mind that the community, which has strongly supported this effort, will benefit from the conservation and cultural protections that come with this designation.”
“Today is an historic day for New Mexico and our nation. President Obama has ensured that the Río Grande del Norte, a symbol of what makes our state truly enchanting, will be preserved as a national monument for generations to come,” Heinrich said. “From the tops of Cerro de la Olla and Ute Mountain, to the depths of the Rio Grande Gorge, the Río Grande del Norte is one of the most spectacular places on earth. Our state’s newest national monument will improve the quality of life for all who hunt, fish and float there, for all who benefit from the tourism dollars it brings, and for all who pass on New Mexico’s many outdoor traditions–both old and new–to their children in such a magnificent setting. This historic monument designation would not have been possible without the tireless efforts of our local community, businesses, sportsmen, tribes, elected officials, and many others who have dedicated years of hard work to protect this area. Let us revel in this moment and continue to heed the call of building a brighter future together for all New Mexicans.”
Meanwhile, U.S. Sen. Tom Udall was joined by about 150 area residents to celebrate the new national monument at the Taos County Commission Chambers.
“The Río Grande del Norte has long-supported our cultural traditions in Northern New Mexico, such as hunting, irrigation and grazing. As a permanently protected national monument, it will drive even more economic progress and job growth through tourism in communities that desperately need it,” Udall said. “This monument designation is a credit to Jeff Bingaman – who led our effort for permanent protection – and the local residents, businesses, environmentalists and leaders who so effectively championed the cause.”
U.S. Rep. Ben Ray Luján also marked the designation saying, “Today is an exciting day for all those who appreciate the majestic beauty of the Río Grande del Norte and who have such strong connections to the land. Whether it’s for recreation or ranching, sustaining a way of life or finding inspiration, the Río Grande del Norte leaves a lasting impression on all those who visit and all those who live off the sustenance it provides. Thanks to the hard work of so many in the community and the support of President Obama, this treasure of northern New Mexico will be protected and preserved for future generations.”
Bingaman, Udall, Heinrich and Luján applauded the decision by President Obama and Interior Secretary Ken Salazar to create the national monument on Friday.
The Río Grande del Norte monument proclamation is modeled after the lawmakers’ legislative efforts to protect the 240,000-acre swath of land. The Bureau of Land Management, under the Department of the Interior, will continue to manage the monument.
In 2007, Bingaman’s office began working with residents of Taos and Rio Arriba Counties to identify how to best protect the land. Since then, Bingaman, Udall, Heinrich, and Luján had worked to advance legislation through Congress to protect the area and asked the White House to consider a monument designation.
In an Oct. 2012 letter, Bingaman and Udall asked President Obama to consider designating the area for national monument status. In a separate letter, Luján and Heinrich also asked the administration to make the area a monument.
Secretary Salazar visited the area Dec. 15, 2012 in response to Bingaman and Udall’s request that local communities were consulted as a National Monument declaration was explored.
Menu
LOS ALAMOS